The Georgetown Set: Friends and Rivals in Cold War Washington by Gregg Herken (Alfred A. Knopf, $30)

It seems like only yesterday. The new director of CIA summons a spy to his office and instructs him to attend a series of Sunday night gatherings to identify “dubious security risks,” telling him “I don’t care whether they were blabbing secrets or not. Just give me the names of the people at Georgetown cocktail parties.” This story is from 1950. Dozens more like it pioneer a new approach to the orthodox field of usually dry and boring diplomatic histories of the Cold War. Many thought Stephen Sestanovich’s recent book, “Maximalist,” was the best ever account of the national security policy battles swirling around American presidents from Truman to Reagan, but now Gregg Herken’s “The Georgetown Set: Friends and Rivals in Cold War Washington” goes further. It mines hundreds of freshly declassified CIA documents in order to recreate exactly where these policy battles occurred. The answer lies mainly in a few square blocks of Georgetown not far from where Secretary of State John Kerry lives today, a few blocks down from my own house on O Street NW.

Herken’s story begins with a comment by Kissinger: “The hand that mixes the Georgetown martini is time and again the hand that guides the destiny of the Western world.”

The author traces the history of the Georgetown Set to 1926 when future Secretary of State Dean Acheson purchased 2805 P Street NW in a poor black neighborhood. The first secretary of state to reside in Georgetown was already there — Charles Evans Hughes. Kerry is the eighth in a group that also includes John Foster Dulles, Cyrus Vance and Christian Herter. Herken’s stories feature a lot of leaking by CIA and Pentagon officials who lived there, too, although he prefers to focus primarily on the journalists who also nestled among them. This volatile mix was of great interest to FBI officials for four decades because they knew journalists are almost totally dependent on access and leaks.

Everyone with a Top Secret clearance is supposed to know that classified materiel can only be stored or discussed in security-approved offices, never kept at home or mentioned around “uncleared personnel,” especially journalists. Three colleagues of mine have been jailed for violating this rule. Media reports suggest that several others are under security investigations this year. Now comes the revelations of leaking shown in hundreds of declassified CIA documents assembled by Herken, a diplomatic historian and University of California professor, who shows just how things used to work. He includes an account whereby President John F. Kennedy “accidentally” left classified documents in the hotel room of Washington Post publisher Phil Graham. He reveals at least 20 major leaks that affected the White House, including President Dwight Eisenhower’s demand for an investigation to discover how the Post learned of the “missile gap” that helped JFK defeat Richard Nixon in 1960.

Cracking down on leakers was high on the agenda of three famous men who never lived in Georgetown and often spoke against those who did —Nixon, J. Edgar Hoover and Lyndon B. Johnson.

Herken misses some major stories such as Selwa S. (“Lucky”) Roosevelt’s memoir, “Keeper of the Gate,” in which she disclosed how she became Ronald Reagan’s chief of protocol by writing an appreciative article based on Georgetown that defended Nancy Reagan from gossip column attacks. He also misses the Georgetown visit of Ian Fleming to the 29th and R Street house later owned by Kay and Phil Graham. In 1941, Fleming provided two memos to Wild Bill Donovan about how to organize the OSS, which in turn became the outline for the structure of the CIA. Starting in 1953, Fleming would write famous novels about James Bond and tell an interviewer that he chose the codename “007” for Bond because the Georgetown ZIP Code was 20007 and so many spies resided there. (The tale may be apocryphal inasmuch as ZIP Codes were not introduced until 1963.) 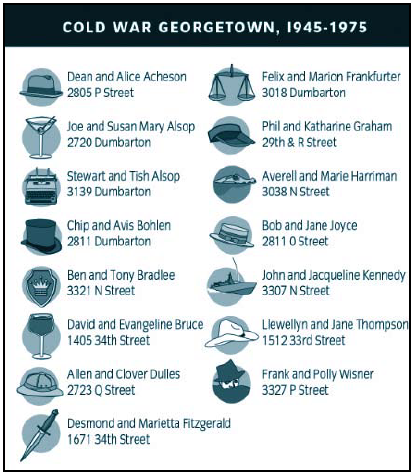 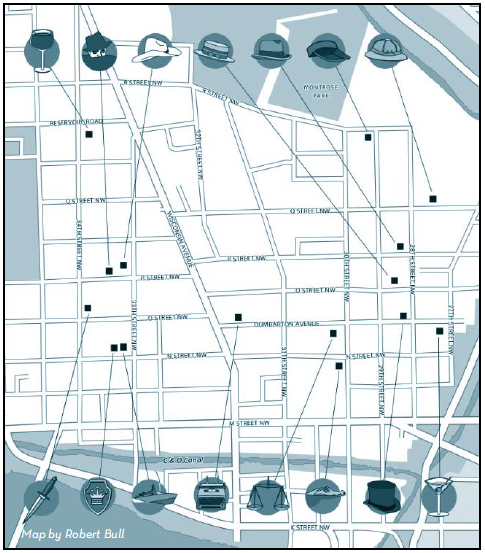 Among the leakers in 1948 was Secretary of Defense James Forrestal, a kind of super hawk who apparently passed along memos and cables about the need for “containment” of the Soviet Union, thereby making the obscure George Kennan into a national hero. Kennan himself seems to have been security minded. He writes in his diary that he refused to reveal his views on China policy in front of journalists even though he stayed at the Alsops’ home when he visited Washington. Leaks, not self-promoting, made Kennan as famous as his anonymous 1947 “X article” on containment theory in Foreign Affairs.

Herken also shows how the Georgetown Set could influence elections. Phil and Kay Graham openly supported Johnson in 1960 against fellow Georgetown resident Kennedy but soon shifted to whomever could beat Nixon. (The source of the “missile gap” leak was never identified and Nixon was undermined. )

“The Georgetown Set” makes good use of declassified transcripts including one of a Watergate era phone conversation Kay Graham had with Kissinger when he was living at 3026 P Street NW. He told her that it was “treason” in the view of the Nixon White House to be talking to her or anyone else in the Georgetown Set.

At one point, the biggest secret in Washington was Kissinger’s opening to China for which his boss wanted all the credit. Nixon was dismayed to read that Kissinger had been shown a “jade jockstrap” as part of a burial suit in Beijing by Zhou Enlai, a detail Kissinger had forgotten to tell him but that appeared in a news column. Nixon and Kissinger wiretapped a dozen staff members but failed to find any leaking.

President Kennedy went over to Joe Alsop’s house on the night of his inauguration. The following year, again at Alsop’s home, Kennedy told Bohlen that U-2 over flights had discovered Soviets nuclear missiles in Cuba. The journalists present all covered the Cuban crisis favorably.

Herken makes good use of earlier research, including such books as “The Georgetown Ladies’ Social Club” by the late C. David Heymann and several hundred declassified CIA documents.

He shows that the earliest leaks were part of fierce policy struggles. Several leaks in 1946-1947 were aimed to counter an aggressive campaign by Hoover’s FBI to prevent the creation of a CIA because the FBI wanted to control international espionage.

By the early 1950s, Herken shows that expenses for dozens of the famous Sunday night dinners hosted at CIA co-founder Frank Wisner’s home (3327 P Street NW) may have been reimbursed by the CIA.

The Sunday soirées took place because the servants were all off duty that one night of the week. Up to a dozen families might bring dishes to the party, including those made from complicated recipes taught by OSS clerk Julia Child in her renowned Georgetown Cooking Class.