Salman Rushdie and the Future of Blasphemy 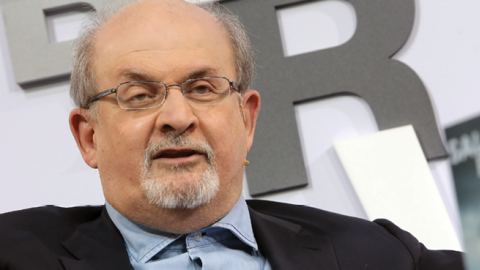 The August 12 attack on novelist Salman Rushdie shows that the threat of Islamist blasphemy accusations is ongoing. It also suggests that the campaign to silence purported critics of Islam is succeeding. Despite this, there is still a widespread tendency to interpret these attacks largely through a Western lens.

Hadi Matar, Rushdie’s assailant, is a Shiite Muslim who appears to have been radicalized during a stay in the Hezbollah-dominated south of Lebanon. He has said that he was driven by the late Iranian Supreme Leader Ayatollah Khomeini’s 1989 fatwa declaring Rushdie’s novel, The Satanic Verses, blasphemous. Khomeini called “on all valiant Muslims wherever they may be in the world to kill [him] without delay, so that no one will henceforth dare insult the sacred beliefs of Muslims.”

For their part, Iranian government spokesmen have said that they had no connection with Matar but that they applauded his action. Iranian state media rejoiced in the attack and lamented that Rushdie had survived. Despite these connections, there is a tendency to misunderstand or downplay these clear religious elements.

On the afternoon of the attack, the New York State Police stated at a news conference that there was no indication of a motive. However, it would be one thing to say that they wanted to investigate more thoroughly before being definite, but it is something else to say that there was no indication of a motive. There was an all-too-clear indication of a motive—that Matar believed Rushdie was a blasphemer. In the New Yorker, Robin Wright, looking back on the original fatwa, opined that “The Iranian leader’s murderous 1989 fatwa … was a political move to exploit the erupting fury in Pakistan, India, and beyond….” Of course, all actions by heads of state will have political overtones, but a more basic reason is Khomeini’s clear and sincere belief that someone who had insulted Islamic sanctities should be killed, a position he had held for a long time.

There was also speculation that Khomeini’s fatwa had been withdrawn or superseded, a view that the Iranian government itself sought to tout in 1998. That year, Iran’s former president Mohammad Khatami proclaimed that the fatwa was “finished.” But this misrepresents the nature of a fatwa. There are additional complex factors, but in simple terms a fatwa is a legal opinion by a qualified jurist or legal scholar. It can address small personal matter such a as whether it is permissible to play chess, or a major issue such as a death sentence on Rushdie. Since this was Khomeini’s own edict, it could not be countermanded except by him: he had ruled what he ruled and, since he did not withdraw it before his death four months later, it necessarily still stands.

Some have drawn an analogy with Western responses to “hate speech,” wherein a person who believes they have been insulted retaliates against their insulter. But there are significant differences. “Hate speech,” if we must use that vague term, is an insult to a person, whereas blasphemy is an insult to God or the divine. Matar himself noted this distinction. While admitting that he didn’t “like [Rushdie] very much,” he stressed that his motivation was that the author “attacked Islam, he attacked their beliefs, the belief systems.”

This difference was brought out by Mohammed Bouyeri who, on November 2, 2004, butchered and attempted to behead Dutch filmmaker Theo Van Gogh in an Amsterdam street. Bouyeri stated that he believed that Submission, a documentary that Van Gogh had made together with Ayaan Hirsi Ali, was blasphemous. At his public hearing, he told the court he had been “motivated by the law that commands me to cut off the head of anyone who insults Allah and his prophet.” He also stressed that “the story that I felt insulted as a Moroccan, or because he called me a goat f****r, that is all nonsense. I acted out of faith.”

This decades-long campaign of violence against those accused of insulting Islam, or merely for disagreeing with extremist ideas, seems to be succeeding. On the same day as the attack on Rushdie, British columnist Kenan Malik suggested that while Rushdie’s critics had “lost the battle,” they had “won the war.” The American writer David Rieff suggested on Twitter that nowadays “The Satanic Verses” would run afoul of “sensitivity readers.” “The author would be told that words are violence — just as the fatwa said.” Rushdie himself had said a year earlier, “the kinds of people who stood up for me in the bad years might not do so now.” “The idea that being offended is a valid critique has gained a lot of traction.”

In fact, Flemming Rose, an editor of Jyllands-Posten when it published the “Danish cartoons” of Mohamed in 2005, said over a decade ago “they have won…. It is no longer possible to publish things like that.”