Promoting American leadership for a secure, free, and prosperous future.

Hudson produced unconventional works such as The Year 2000, in which Kahn and Anthony Wiener extrapolated into the future, and The Emerging Japanese Superstate, which projected Japan's economic success. 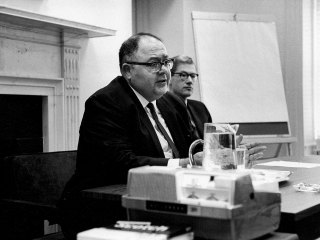 As funding for military research projects decreased, Hudson started examining domestic, social, and economic issues. These efforts produced books such as Frank Armbruster’s Our Children’s Crippled Future, which examined the failings of the American educational system long before they became a matter of widespread public concern.

Following Kahn’s untimely death, Hudson moved its headquarters to Indianapolis in 1984. In the absence of its founder and visionary, Hudson broadened its scope by securing a diverse, influential research staff. In 1987, Hudson’s landmark study Workforce 2000 accurately forecasted the changes the American workforce would encounter with the new millennium. In 1997, Hudson released its sequel, Workforce 2020. In addition, Hudson played a crucial role in engineering Wisconsin’s Welfare-to-Work program in 1995, and its once-supported Modern Red Schoolhouse Project has been implemented by dozens of schools across the Midwest.

On June 1, 2004 Hudson Institute moved its operations to Washington, D.C., in an effort to focus its research on foreign policy and national security issues.