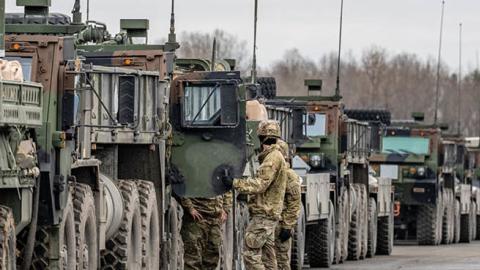 Caption
U.S. Army vehicles on the grounds of the Grafenwoehr military training area in Bavaria on February 9, 2022. (Photo by Armin Weigel via Getty Images)

From tours of Silicon Valley to testimony on the Hill, the Department of Defense is acknowledging its struggle to effectively harness advancing commercial technology and compete with a rapidly modernizing and expansionist Chinese military. Notably, members of Congress, Department officials, and industry associations are pointing to the process for planning and approving its budget as a culprit. The most frequently cited complaint is that starting a new acquisition requires insertion in the budget request two years ahead of time, and waiting up to another year to get funds approved by Congress. Holding the Department accountable is critical, but for our military to remain competitive, we must adapt oversight to flexible processes.

One opportunity for potential improvement is a recently formed Congressional Commission tasked with recommending actionable improvements to the Department's Planning, Programming, Budgeting, and Execution (PPBE) process. The PPBE system is essential to internal management and decision-making. But it also supports Congressional oversight as it divides spending into required pieces, delivers annual detailed budget requests and reports, and produces reams of justification documentation. As a result, the military departments, the offices of the secretary of defense, and Congress are all stakeholders in the PPBE process and its products.

However, calls to modernize oversight are complicated by a lack of timely and complete transparency between the executive and legislative branches of government. On the executive side, it is common for leaders to call for additional budget flexibility from congressional appropriators. Military leaders lament the difficulty in trying to build a budget that has accurate predictions of threats, state of technology, and opportunities two or three years in advance. They point out how this can lock the Department into acquisition plans with obsolete baselines. Within the legislative branch of government, there is suspicion that the Department will abuse increased flexibility and insistence on carefully executing congressional duties in oversight.

But new tools could help resolve the classic impasse. One promising idea that will be worth examination by the PPBE Commission is that of a portfolio, where existing budget line items are bundled together under the authority of a portfolio manager, who could rebalance execution issues and onramp new technologies and performers as opportunities arise. Tight portfolio scope and modern reporting like that available through the Advancing Analytics platform would help Congress hold the manager accountable for the results of their work rather than the quality of their predictions.

While tools for budgetary flexibility exist at present, they are so limited, complicated, and time-consuming that they often go unused. Currently, financial managers exercise authority to transfer funds between most accounts across the Department as long as it is below a specified threshold. To exceed this threshold, which has not been increased for years, the Department uses a lengthy reprogramming process that ultimately requires Congressional approval. Instead of enduring this process, program offices are often motivated to make the best of an obsolete plan. This means that they will continue spending in order to stay the course on obligation and execution rates, even if they know there is a better alternative, rather than attempt the unpredictable and lengthy reprogramming process.

By contrast, a budget with a portfolio structure would push decisions to the person responsible for their execution and outcome. Instead of controlling budgetary flexibility through dollar limits, a portfolio would scope flexibility around a strategy. While individual programs would still be responsible for meeting their approved requirements, it would be the task of the portfolio manager to rebalance funding across budget activities and individual programs to pursue the overall objectives and strategy. In essence, it delegates authority and responsibility to the portfolio manager (for example, a program executive officer or PEO) in exchange for the expectation of superior outcomes from their decision-making. This structure could improve execution by allowing transfer from an underachieving effort to one that is exceeding performance targets. It would also enable cost savings by consolidating funding for common infrastructure, such as cloud computing. With limited authority to start new efforts during the year of execution, a portfolio would also partially alleviate the technology valley of death, smoothly reallocating funding as technologies mature.

In many ways, this concept supports Congress in operating more like most modern corporate boards. Boards aren't effective at controlling the details of a company's execution, and it is difficult to make a recalcitrant CEO pursue a board initiative. Instead, board controls tend to be broad and binary -- approving strategies after proper vetting, agreeing to major initiative investments, or firing a CEO in extreme cases.

While portfolios certainly won't resolve all the ills of a lumbering defense modernization process, Congress and the Department should cooperate on promptly starting a pilot to help inform the findings of the PPBE Commission. More importantly, we don’t have a moment to waste in the race to modernize in the face of rising threats.