Arm Ukraine to Fight Drones from the Air 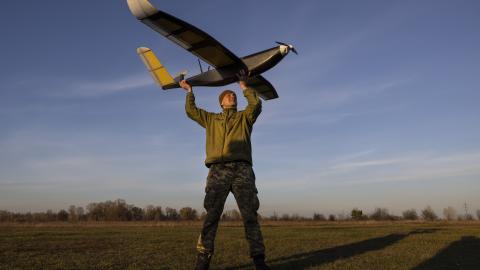 Ukrainian troops shifted the war’s momentum this fall with their successful counteroffensive in the country’s north and south. However, the liberation of Kharkiv, Kherson and other cities may prove pyrrhic victories if Ukraine’s military and its Western supporters cannot counter Russia’s drones, which are devastating Ukraine’s utility infrastructure on the eve of winter. After recent battlefield gains improved its hand in potential future negotiations with Russia, Kyiv is now watching its position erode as residents are evacuated from Kherson mere weeks after shedding Russian occupation.

The problem is not due to a lack of effort. Ukrainian air defenses have been surprisingly effective against Iranian-supplied suicide drones such as the Shahed-136, downing between 60 and 85 percent during the past two months. But close is not good enough in air defense. With 100-pound warheads, even a few Shahed-136s can damage a transformer facility or shut down a water treatment plant.

Militaries deal with the fallibility of air defenses by using multiple overlapping systems around the most likely targets and accepting the risk of attacks elsewhere. That approach may not work when protecting civilian infrastructure. Substations and pump houses are widely distributed, and each one supports hundreds of residents. Surface-to-air missile systems such as NASAMS can cover only a 10- to 30-mile radius and use interceptors costing 10 to 100 times the price of a Shahed-136. Ukraine is running out of NASAMS rounds, so these systems will need to focus on the more dangerous Russian missile threat rather than drones.

The cheapest and highest-capacity air defenses are electronic. Because they take hours to travel from Russian-held territory to Ukrainian targets, drones such as the Shahed-136 depend on GPS or other satellite systems to navigate and often need targeting updates via radio. To disrupt these signals to Russian drones, Ukrainian troops could deploy inexpensive and commercially available GPS jammers or spoofers around potential targets. Over wider population centers, airborne communications and satellite navigation jammers such as those carried by small U.S. drones or the more capable Multi-Function Electronic Warfare system on the Army’s MQ-1C Gray Eagle could cause Russian drones to miss their targets or fail outright.

If navigation disruption does not stop an incoming salvo, Ukrainian unmanned air vehicles, or UAVs, could attack drones with air-to-air missiles. Although the AIM-9 and AIM-120 missiles used by NATO fighters are expensive for this mission, recent tests showed MQ-1C and MQ-9 UAVs could use more numerous Hellfire missiles to shoot down slow-flying drones at less than half the price of an AIM-9. Patrolling over Ukrainian-held territory, the long-endurance UAVs could stay outside the range of most Russian air threats and free up manned fighters to perform offensive missions.

Ukraine’s problem is not unique. Enduring periodic salvoes of Iranian and Houthi drones and missiles, U.S. Persian Gulf allies need more effective and sustainable approaches to air defense. And in the Western Pacific, China could launch hundreds of drones against bases in the region. Even the U.S. territories of Guam and the Northern Marianas could come under long-range drone attack. Long-endurance unmanned aircraft could help counter these threats, freeing up high-end missile defenses such as the Patriot or NASAMS to counter cruise and ballistic missiles.

Unmanned aircraft like the MQ-1 or MQ-9 also could help stop future attacks. As our colleagues Michael Doran and Can Kasapoğlu compellingly argued, defense alone eventually will fail against a cheap and numerous threat like that posed by Russia’s Iranian-supplied drones. Therefore, a sustainable approach to protecting Ukraine’s infrastructure should include counter-battery fire against drone launch sites and staging areas. These installations are likely beyond the reach of Ukraine’s Western-supplied HIMARS rockets, so a longer-range weapon is needed.

Attacking Russian or Belarussian territory to degrade the drone threat may not be an option, but Ukrainian forces should be able to engage launch and storage facilities inside Russia-held parts of the Donbas or Crimea. U.S. drones like the MQ-1 or MQ-9 could enable these attacks, in addition to supporting a more sustainable defense over Ukraine’s cities and towns.

Hundreds of MQ-9s are getting ready to be retired alongside expiring AIM-9 and AIM-120 missiles. Dozens of MQ-1Cs, four of which were proposed for transfer to Ukraine, are also available, as are numerous airborne jamming pods. The United States should send some of these excess defense articles to Ukraine. The transfers would help defend the Ukrainian people from Russia’s illicit drone warfare and aid U.S. and allied militaries in developing sustainable air defense schemes that guard against drone and missile salvoes in the Pacific and beyond.