China Tests America’s Will with Clashes along India Border 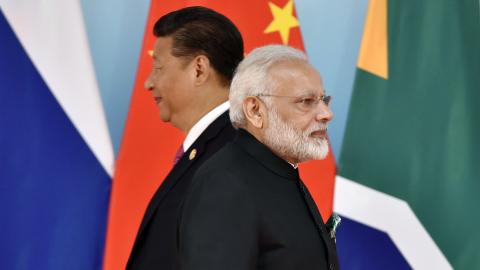 Caption
Xi Jinping and Narendra Modi during the BRICS Summit in Fujian, China, on September 4, 2017. (Kenzaburo Fukuhara/AFP via Getty Images)

The latest clash between Indian and Chinese soldiers across the Line of Actual Control (LAC) is a reminder that China, under President Xi Jinping, plans to remain aggressive and assertive after the 20th Congress of the Chinese Communist Party. With limited and manageable conflict in the Himalayas, the Chinese are testing the will of the United States to check China’s muscle flexing and the strength of burgeoning American partnerships in the Indo-Pacific, especially the one with India.

In China’s reckoning, India is both its most likely Asian rival with a comparable population size and the least likely American military ally in the Indo-Pacific Quad (a loose grouping of US, Australia, Japan and India). Given India’s desire to maintain sovereign autonomy, China wants to provoke India into ending its current close relationship with the US—a relationship that is not a military alliance.

Chinese leaders seem to believe that, faced with the prospect of an aggressive China on its land border, India will be further compelled to maintain a more balanced posture towards China and the United States. The US goal, in such circumstances, should be to continue to persuade India to improve its military preparedness, hasten its military modernization and increase interoperability of military equipment in India’s use with American (and allied) systems.

The Biden administration reacted to the latest India-China conflict with a strong statement offering support for India and referring to Chinese actions as provocative. The last time the two sides fought along the India-China border, the US enhanced intelligence sharing with India. This time, in addition to intelligence sharing, the US could fast-track supply of advanced military equipment to India to signal its support for a key partner that is not a formal military ally.

The Dec. 9 clash in the Yangtse area, near Tawang in India’s northeastern state of Arunachal Pradesh, was the second such clash in slightly over a year between Indian and Chinese troops. The two forces also fought in June 2020, when Peoples Liberation Army (PLA) troops attacked Indian border guards at Galwang in Ladakh, along a disputed border, armed with crudely fashioned spiked clubs. There was another border clash in October 2021.

The two sides have now disengaged after a flag meeting between local commanders. Although 15 Indians and an unknown number of Chinese troops sustained injuries, the casualties were not comparable to the 2020 fighting in Galwang when 20 Indian and 40 Chinese soldiers reportedly died, and many others were injured.

While the 2020 fighting was in Ladakh, this time the Chinese chose Arunachal Pradesh to flex their muscle. Both these Indian states have long been claimed by China, though India and most members of the international community disagree.

The latest confrontation between Indian and Chinese troops was interestingly timed. It occurred just one month after Prime Minister Narendra Modi and President Xi met at the G-20 Summit in Bali and one week after the annual US-India military exercise – “Yudh Abhyas 2022” (War Simulation or Preparation). China had expressed displeasure at the exercise, which was held around 60 miles from the India-China border.

Unlike 2020, when the Indian side limited its response to diplomacy, the Indian army reacted strongly this time and beat back the attackers. A new deployment strategy – with one layer of troops who patrol close to the border and a second layer of troops or Quick Reaction Team who, if need be, can be deployed to match the PLA numbers – made the Indian military reaction possible.

After the 2020 standoff, the two sides undertook 16 rounds of diplomatic and military negotiations, but they were unable to reach a mutually acceptable solution. Beijing lays the blame at Delhi’s door, arguing that China has simply been responding to Indian infrastructure build up along the border. China insists its troops are simply “upholding China’s territorial and sovereignty security” and responding to India’s “trespassing and infringing activities.”

India maintains that it has been upgrading its border infrastructure for over a decade and that China has disturbed three decades of “peace and tranquility.” Unlike in the past when India was willing to continue business as usual with China even without the border being restored to status quo ante, Delhi now insists that restoration of normal relations is contingent on restoring peace along the border.

The regularity of Chinese forays along the Himalayan border with India suggests that these are not local tactical maneuvers but are part of a broader Chinese strategy. China is concerned about India’s closer alignment with the United States and its partners — in the Indo Pacific and through the Quad.

The emerging India-US strategic partnership, and India’s signing of foundational military agreements with the US, has meant that both the Trump and Biden administrations were willing to share intelligence with and help India bolster its capabilities on the border. Now, India and the US must identify advanced weapons systems that the US and its allies might be able to deliver to India to deal with the rising Chinese threat.