Democratic Backsliding in the Indo-Pacific 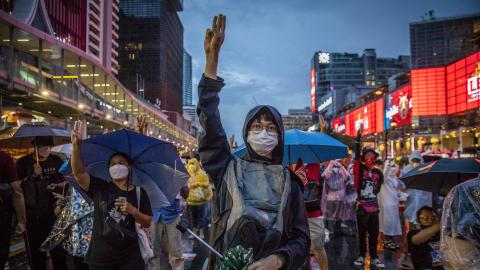 Caption
Thai anti-government protesters hold up a three-fingered salute during a rally against restrictions on political speech on October 31, 2021, in Bangkok, Thailand. (Lauren DeCicca via Getty Images)

A negative trend of democratic recession has steadily unfolded across the Indo-Pacific region since the 2010s. Subregionally, Southeast Asia has suffered from the most severe drop in democracy scores, while East Asia and South Asia have experienced a moderate decrease. Oceania remains the most democratic subregion and has achieved a slight increase in its democracy scores.

There has been a remarkable shift of balance from democratic advancement to democratic backsliding in the Indo-Pacific. In the three years from 2019 to 2021, the percentage of political regimes experiencing democratic backsliding surpassed those making democratic advancement. Evidence also shows that democratic recession is much more pronounced in populous societies than in sparsely populated societies. Overall, both the number and percentage of people living under autocratic-leaning regimes and autocratic regimes have reached record high levels.

Democratic recession in the Indo-Pacific is caused by the coupling of domestic and geopolitical forces. Domestically, democratic recession has principally been driven by deep-rooted cleavages inherent within the countries and territories where illiberal strongmen, including populist leaders, army generals, and nationalist state leaders, exploit such cleavages to reinforce their repression of democracy. Geopolitically, under a multipolar Indo-Pacific, illiberal powers including China and Russia are expanding their spheres of influence by providing support to illiberal strongmen across the region.

Traditionally, “democracy” and “security” are seen as two separate fields in the policy world. The major findings of this report, which documents the coupling of domestic and geopolitical forces in causing democratic recession across the Indo-Pacific, raises questions on the validity of the conventional thought pertaining to democracy promotion and security competition.

Today, the Indo-Pacific region presents the free world with a double-challenge of democratic recession and security competition, indicating that it’s the time to tear down the longstanding artificial wall between democracy and security. There is an urgent need to invest in new knowledge infrastructures that can provide integrated strategic analysis to policymakers and practitioners.