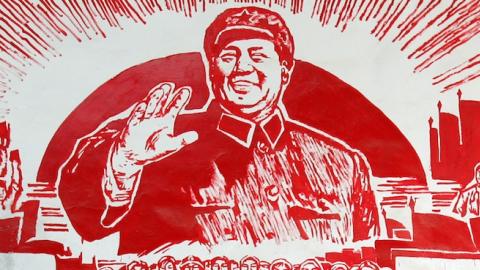 On October 1, 1949, Mao Zedong proclaimed the founding of the People's Republic of China while standing atop Beijing's Gate of Heavenly Peace. In the decades that followed, many China watchers in the West confidently predicted the fall of his regime. Others hoped that a cadre of moderates in the Beijing government would lead to a kinder, gentler, more democratic China.

As China turns 65 in a couple weeks, its ruling Party appears nowhere close to planning its retirement party. It is stronger, more nationalistic and more committed to maintaining one-party rule than at any time since Mao's death.

Nor has President Xi Jinping been the moderate reformer some hoped for. Under the cover of anti-corruption, Mr. Xi has consolidated his power over the party and squelched talk of democracy. In a speech to the National Congress earlier this month, he said that preventing the government from becoming "leaderless [and] fragmented" with "political fighting and wrangling between political parties" was among his top priorities. Even in Hong Kong, the last bastion of political freedom in China, Mr. Xi has ruled out free elections for 2017.

What happened? How did Western policy makers and academics repeatedly get China so wrong? To this day there is no expert consensus on China's economic growth and GDP, the size of its military and intelligence budgets, or even its intentions toward the West. Much less is there consensus on what direction China will take, even though most evidence points to political retrenchment, surging nationalism and opposition to the postwar international system.

Western governments failed to understand Mao's China from the beginning. The experts in the Truman and Eisenhower administrations believed it would not enter the Korean War. Kennedy and Johnson believed that China would stay out of Vietnam. Every American administration up to that point also believed that China would be permanently aligned with the Soviet Union as something of a junior partner. Then a Sino-Soviet border war broke out in 1969, shocking the U.S. foreign policy establishment.

When Richard Nixon and Henry Kissinger took office, the American view was that relations between China and Russia were permanently broken, thus leading to the surprising "opening" in 1972. By the time Ronald Reagan took office, the prevailing view was that "so-called Communist China," as Reagan himself liked to put it, was on the path to free market democracy.

That arrival is now three decades overdue. No one in the George H. W. Bush administration foresaw the 1989 Tiananmen massacre. A year later, American policy makers were shocked again when China reversed its diplomatic course and began buying Russian fighters and submarines to threaten Taiwan.

The forecast that the CCP would wither away in the face of political reforms and yield to a multi-party, democratic system has proven alarmingly wrong. Instead, the party has reinvented itself by recruiting the middle class and millionaires to its cause. Most estimates suggest China's GDP is still half state-controlled (though we don't know that for sure, either).

Similarly, continuing forecasts of democracy—such as Bruce Gilley's "China's Democratic Future, How It Will Happen"—continue to prove embarrassing for professors and journalists who write them. As for books on China's economic future, there remains no consensus. One well-known book on the shelves of many China scholars—"The Coming Collapse of China"—competes with another called "When China Rules the World."

False predictions have also been made about the strength of the People's Liberation Army—that it would remain a short-legged, land-based force. Instead, in August 2014, President Xi met with generals to discuss innovative plans to catch up with America's military force. Which generals were there? The same ones we are reassured are mere "fringe" elements in the Chinese government—including General Liu Yazhou, the host of a venomous anti-U.S. video called "Silent Contest."

These generals are now attacking President Obama for a routine U.S. military exercise near Guam involving two aircraft carriers that is scheduled to run this week. They claim that the act is an American provocation designed to threaten China's birthday party.

In other words, the Middle Kingdom—potentially the most formidable opponent we have ever faced—remains as much of a mystery as ever.

What accounts for this? Why does doubt and conjecture still shroud a nation that for six decades we have studied, worked against, then allied with, then clashed with again?

The answer that I've come to after studying the Chinese for 40 years is that the problem is not China, but us. For six decades we Westerners have looked at China through our own self-interest—as a potential check against the Soviets, or a source of American trade and business investment.

We have projected on the Chinese a pleasing image—a democracy in waiting, or a docile Confucian civilization seeking global harmony. We have been reassured by China's leaders seeking our economic, scientific and military assistance, and have ignored writings, actions and declarations that warn of growing nationalism. After 65 years, we don't know what China wants because we haven't truly listened to some of the powerful voices that undermine our wishful thinking.

As China continues its rise, our first step should be to dismantle comfortable assumptions and false realities. We must study China anew and recognize that its Communist rulers are determined not to fade into history.