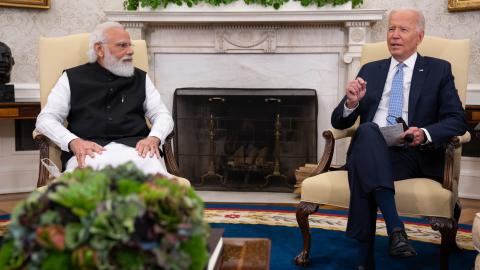 The recent flurry of US diplomatic engagement with Pakistan is not the ‘reset’ in the troubled relationship that Pakistanis are hoping for. The two countries are witnessing a diplomatic reengagement, after months of American neglect of Pakistan. But the US view of Pakistan as the   frenemy that caused American defeat in Afghanistan has not changed. Nor has the perception that, when the chips are down Pakistan will stand on China’s side rather than that of the US.

Pakistan may have at one time been America’s ‘Most Allied Ally.’ But Pakistan’s two-faced policy on terrorism and betrayal in Afghanistan have left a deeper impression on the American psyche than Pakistanis, and possibly even Indians, realize. Moreover, the Cold War during which Pakistan was a US partner is long over, and the rise of China has led to a much stronger India-US partnership.

India, which is seen by Pakistanis as their ‘permanent enemy’ is now America’s partner of choice not only in South Asia but the Indo Pacific. It would take much more than a few high-level visits by Pakistani civil and military officials to restore American trust in Pakistan, which remains strategically aligned with America’s new peer competitor, China.

The recent diplomatic engagements between the US and Pakistan are simply part of an American attempt to re-engage with a nuclear armed country that does not always fulfil western expectations but is not openly hostile to the U.S. either.

A high profile meeting between Secretary of State Antony Blinken and Foreign Minister Bilawal Bhutto Zardari, the announcement of a $450 million sale for the maintenance of Pakistan’s F-16 fleet, and the first official visit of a Pakistani army chief to the Pentagon in seven years creates the illusion of a return to old patterns of cordiality.

But there is no sign that the US is considering directing large amounts of economic or military aid towards Pakistan. Despite the recent cataclysmic floods, American relief aid to Pakistan is under $100 million. By way of comparison, the last time Pakistan was hit by devastating floods, in 2010, the US provided over $500 million in assistance.

India has raised strong objections to the recent Biden administration decision to approve $450 million in Foreign Military Sales (FMS) for maintenance of Pakistan’s F-16 fighter jets. Compared to the $20 billion in defense trade between India and the US, this amount is miniscule. It is standard American policy to ensure that any defense equipment sold to another country is provided with a “life cycle maintenance and sustainment package.”

In any case, Pakistan will have to pay for the maintenance of its fighter jets with its own funds, unlike the past when the US armed Pakistan under its concessional Foreign Military Financing (FMF) programme involving US funding. That would be a burden on Pakistan, given its continuing economic crisis.

The Pakistani security establishment seeks to re-engage with the US because it prefers American military equipment and technology. Although Pakistan and China are described as ‘Iron Brothers,’ their economic and security partnership has not helped Pakistan bolster its security or enhanced economic growth.

From America’s perspective, it can take advantage of Pakistan’s compulsions. The US does not wish to ignore Pakistan, which Americans worry about for its nuclear arsenal, its close alignment with China, its providing safe haven to myriad Islamist terrorist groups, and its insistence on causing mischief for the US and its partners like India.  The new US relationship with Pakistan is likely to be a downsized version of the past. There is no need for bases to spy on the erstwhile Soviet Union, as in the 1950s or 1960s, no anti-Soviet Jihad to fight in Afghanistan from a Pakistani bridgehead, and no largescale US military deployment across the Durand Line to supply and support.

There is limited American need for intelligence cooperation, but advanced drone technologies have reduced the dependence of yesteryear. The realization that Pakistan is no longer a US ally is now accepted wisdom in Washington. Although the US is Pakistan’s largest trading partner, trade in goods and services between the two countries has never exceeded the current figure of $ 6.6 billion annually. This is comparable to US-Morocco trade in goods and services and is hardly a trickle in the annual  US trade volume of $ 5 trillion. That should serve as a reminder of the relative importance of Pakistan in America’s current hierarchy of priorities.  Pakistani expectations of a return to the good old days of alliance with the US will certainly remain unfulfilled. Indians, on the other hand, should not be overly concerned about a downsized and modest US-Pakistan relationship. For India, American leverage over Pakistan is preferable to total Chinese hegemony.

Read in the Hindustan Times.