Will Europe's Energy Crisis Trigger Another Wave of Refugees from Ukraine? 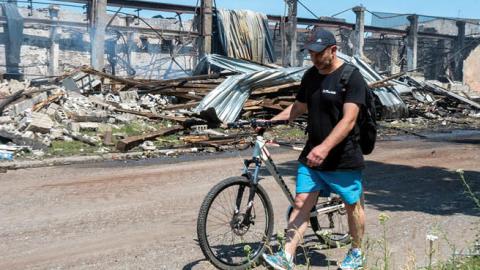 Caption
A man pushes a bicycle as he walks past a building of Mashgidroprivod plant, which was destroyed by a Russian missile attack in Kharkiv on June 29, 2022, amid the Russian invasion of Ukraine. (Photo by Sergey Bobok/AFP via Getty Images)

As summer months kick in and air conditioners are cranked up, heating is hardly on anyone's mind. Yet energy scarcity in Eastern Europe coupled with massive damage to Ukraine's civilian infrastructure could send another tidal wave of Ukrainian refugees across international borders when the weather turns cold later this year.

The exodus of Ukrainians following Russia's unjustified and brutal invasion was met with an unparalleled emergency response in neighboring countries and all across the continent. Europe successfully absorbed the first wave of refugees, as 3.5 million Ukrainians registered for temporary protection in EU countries by the end of June. As the war became more and more localized to the eastern part of the country, the refugee influx slowed to a trickle. Thousands more people returned to Ukraine than fled the country between May 25 and June 8. This trend is likely to continue through the rest of the summer barring an abrupt escalation of Russian attacks in the west of the country.

As Americans and Western Europeans feel more and more pain at the pump and at grocery stores, however, headlines of a faraway refugee crisis have been gradually replaced by coverage of growing economic hardship at home. With Russia curbing the gas exports that power industries, generate electricity, and provide residential heating in the continent, the EU scrambles to avoid an energy crisis this winter. Uncertain energy supply is causing volatile and unprecedented price increases across the EU. Market intervention, protectionism and price capping have become part of the transatlantic energy policy agenda. Inflation skyrocketed on both sides of the Atlantic. In the EU it was highest in Estonia (20.1 percent) while in the U.S. it reached a 40-year high (8.6 percent) in May.

Ukraine, now fighting a brutal war against its own energy supplier, faces even more dire energy supply problems. Already, fuel shortages are a daily occurrence in Ukraine. Before the war, 80 percent of the country's fuel needs were imported, mostly delivered by rail from Putin proxy Belarus. Panic buying and the Russian blockade of the Ukrainian coastline, specifically the port of Odessa, further exaggerated fuel scarcity. WOG, one of the biggest gas station chains in Ukraine, limits customers to about 2.6 gallons per day. The looming shortage will further devastate the agricultural sector, which is already ravaged from the Russian blockade.

There are minor steps being taken to ease the situation. Slovak Economy Minister Richard Sulík announced that the Druzhba pipeline, which delivers Russian oil to Central Europe, may be converted into a product pipeline to send fuel back into Ukraine. Ukrainian energy company Ukrtransnafta signed a contract with Hungary-based energy company MOL to upgrade the infrastructure and supply 35,000 tons of diesel per month. The delivery capacity, however, is now 5,000 tons at best, which is only one-seventh of Ukraine's monthly consumption.

According to Oleksandr Kubrarov, Ukraine's infrastructure minister, all Ukraine's fuel imports now arrive from Europe. The EU still has six months until the ban on Russian crude and refined product imports takes effect. In the meantime, it is scrambling to load up on diesel in June—imports from Russia grew almost by 15 percent from last year. How is Europe going to supply Ukraine when the ban takes effect? Nobody knows.

The natural gas situation in Ukraine looks even more frightful. Although not facing shortages yet, storage facilities are only at 19 percent—the lowest in Europe. "We must prepare for the next winter—in our state, on our land, for all citizens"—said Ukrainian President Volodymyr Zelensky. Ukraine aims to stop all natural gas and coal exports to stock up its reserves for the cold months. It's not going to be enough. Yuriy Vitrenko, CEO of Ukraine's state-owned Naftogaz, said at a meeting of the U.S. Commission on Security and Cooperation in Europe that an estimated additional 6 billion cubic meters of imported gas would be needed before the end of October to fill underground storages for the winter.

The extensive damage to residential buildings in Ukraine's urban centers only aggravates the situation. Even if there were enough energy for heating, temporary shelters and partially destroyed housing units with shattered windows where people are still forced to live require even more energy. The UNHCR already published a winterization strategy that includes handing out nails, wood, and insulation to Ukrainians to conduct preliminary repairs—while indiscriminate Russian shelling continues.

Importing from the EU is only possible if there is any surplus that Europe can spare. Kyiv could source some gas via pipeline connections with Slovakia and Hungary—two landlocked, highly Russian-energy-dependent countries. Filling up the EU's storage caverns is crucial. The European Commission's target levels are hard to meet except by ramping up imports of expensive U.S. liquefied natural gas rerouted from Asia. Storage plays a fundamental role in ensuring the EU's energy security, covering 25 percent or more of its winter consumption. Having appropriate reserve is a joint liability that benefits all Member States.

If Europe doesn't have enough gas for the winter, it will affect Ukraine as well. The flow from Russia to the EU is drying up week by week. Gazprom has recently reduced it through Nord Stream 1 by 60 percent, prompting cutbacks across Europe. In other countries, including Poland, gas nominations already fell to zero. Germany was recently forced to declare a gas crisis and signed a memorandum of understanding with several neighboring countries for mutual assistance in case of an electricity crisis. There is a growing risk that Gazprom will halt the entire gas transit flow, which would put not only the EU's but also Ukraine's winter supply at risk. In case of an immediate halt of gas delivery, Ukraine's reserve would last only for 5 to 7 days.

There's no way Ukraine and the EU can replace all of its Russian gas needs before winter hits.

So how will all this affect the refugee situation when the weather turns cold—and in Ukraine's case, really, really cold for months?

Presently there are more than 7 million internally displaced persons in Ukraine, with many more lacking basic necessities. In the hard-hit city of Kharkiv some areas have been without water or electricity for months with residents sleeping together in basements and cooking on open fires outside. In Russian-occupied Mariupol the damage to the water pipelines is so extensive that residents are forced to collect water from puddles. With winter approaching, a second massive wave of refugees will be forced to cross into the EU. Europe might not be able to handle another influx of millions.

It is not surprising that Zelensky urged the G7 to end the war before winter sets in. Although his emphasis was on defense, the humanitarian effects cannot be disregarded. Ukraine's coldest winter is yet to come.