No Compromise with the Woke Revolution 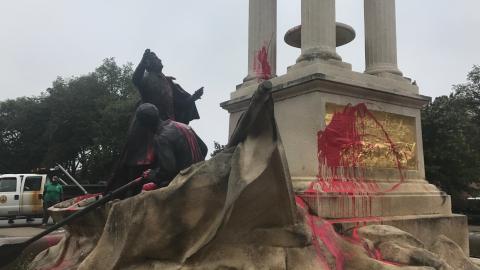 The woke revolutionary assault on national heroes is occurring throughout the West. In Britain, even statues honoring Winston Churchill have come under attack. From France to Sweden, the woke Left seeks to denigrate national histories. Everywhere the goal is the same: to undermine national democratic traditions.

In America, the woke revolution advances.

Educating for American Democracy seeks to “harmonize” a national consensus on civic education. The leaders recruited a few conservatives to provide cover for a “trans-partisan” project. But the executive committee is sacked 8-2 to the left, dominated by progressive academics from Harvard and Tufts and left-wing activists that promote so-called “Action Civics.” Of the 300 educators who participated, perhaps 10 are non-liberals.

Let us start with a rather basic question: what does this national “consensus” tell us American students should learn about George Washington? Well, the project laments that “students can make it into their teens without knowing that Washington was not only a foundational leader, but also enslaved people.”

Let that sink in. George Washington and other founders are defamed by establishment educators as “enslavers.” This is, of course, a blatant lie. Washington, Jefferson, and Madison were not, by definition, “enslavers”—they did not seize individuals who were free and put them in bondage. The three Virginians were slave owners who sought, in Lincoln’s words, the “ultimate extinction” of that institution. Washington freed his slaves and provided for their education and economic well-being in his will.

During the last few years, this falsehood of the founders as “enslavers” has been embedded in educational materials. Is this a more inclusive and accurate history? Of course not. The term “enslaver” is a weaponized concept that is deliberately employed by woke progressives because they know that to succeed in “fundamentally transforming America,” it is first necessary to denigrate and delegitimize the American Founders.

The so-called consensus expressed in Educating for American Democracy also degrades American citizenship by redefining the concept of a “citizen,” arguing that “ethically…all who reside in the United States,” citizen or non-citizen, legal resident or illegal alien who just crossed the border, should be involved in political decision-making.

In addition, a major goal of the progressive education establishment is the nation-wide implementation of Action Civics, in which students receive class credit for participating in political protests that magically are always leftist—never pro-gun rights or pro-life protests.

Educating for American Democracy tells us that themes of “marginalization and oppression” should be central to American history. However, they say there is a possibility of achieving “democracy” someday in the future.

This so-called “democratic possibility,” wherein true “equity” is achieved, is a radical utopian vision of equality of result, which will never be reached in the same way that Marxist cadres in Communist regimes never achieved “true socialism.”

Educating for American Democracy is only one of a series of well-funded, abundantly staffed, overlapping projects in both the public and private sector promoting the woke revolution in American education.

Significantly, the Mellon Foundation has launched a 250-million-dollar Monuments Project to “transform” the nation’s monuments, which commemorate America’s past, because “today, our public realm disproportionately celebrates a limited few.”

Recently, the Heritage Foundation reported that woke revolutionaries now control Thomas Jefferson’s Monticello and James Madison’s Montpelier. Obsessed with the concept of the founders as “enslavers,” these anti-American radicals are desecrating the birthplaces of patriots who risked the gallows for American independence.

It is important to note that Educating for American Democracy, the Commission on Democratic Citizenship, and the Partnership contain a few Republican participants who serve in a subordinate role, as junior members, and provide “bi-partisan” cover to the broader progressive agenda. In the name of promoting civic education they are either naïvely or deliberately legitimizing projects that denigrate and degrade historic America.

Let us move from culture to politics.

Legislation currently before Congress would implement this woke revolution in history-civics education. It would implement the teaching of Critical Race Theory and de-legitimize America’s Founders, our principles, and our stories. The legislation is the Civics Secures Democracy Act introduced by Democrat Senator Chris Coons of Delaware and Republican Senator John Cornyn of Texas.

The bill provides six billion dollars over six years in competitive grants to states, local school districts; nonprofits; and to university schools of education for teacher training. It requires a national test on history-civic knowledge that would be developed by educators chosen by the Biden Administration.

The criteria and the reviewers for the grants are determined by Biden’s Department of Education. States would have to tailor their grant proposals to Biden’s priorities. The priorities originally issued by the Education Department listed as examples the 1619 Project and the work of Ibram X. Kendi, extolling Critical Race Theory.

Realizing that they could scare off some Republicans with this explicit language, the latest priorities now emphasize the “traditionally underserved.” But, no doubt, it will be clear to the state grant proposal writers that critical race theory in some guise is what Biden’s federal government wants.

The National Association of Scholars (NAS) sent an open letter to Senator Cornyn and Congressman Tom Cole of Oklahoma, the Republican co-sponsors of the Civics bill. In the letter leading conservatives (including Stanley Kurtz, Roger Kimball, Mark Bauerlein, Ryan Williams, Ginni Thomas, Christopher Rufo, and others) asked the Republicans to withdraw their co-sponsorship.

The letter pointed out that the Civics bill will “give the Federal government de-facto power to impose critical race theory and Action Civics on the states.”

But Senator Cornyn rejected the letter and claimed the legislation prohibited Biden from establishing a national curriculum based on Critical Race Theory, citing these words in the proposed legislation: “nothing in this Act shall be construed to authorize the Secretary of Education to prescribe a civics and history curriculum.” This language, added by Cornyn, does not prohibit a national curriculum. It simply does not authorize one.

In any case, the problem is not a de jure woke national curriculum, it is a de facto one. The Cornyn language does not fix the problem. The Biden Administration sets the priorities and decides the criteria for the grants and chooses the reviewers that judge the proposals. This is the exact same formula that the Obama administration used in forcing common core national standards in math down the throat of the states. Recently, and incredibly, Republican Senators Cassidy of Louisiana and Inhofe of Oklahoma have co-sponsored the bill.

Ron DeSantis is the first (and so far, only) Republican Governor to denounce the civics bill. DeSantis charged that Civics Secures Democracy was an attempt “to buy off states with six billion dollars, if they sacrifice American History for Critical Race Theory.” It was an attempt, DeSantis said, to “indoctrinate” American students in Critical Race Theory and “Biden’s other political whims of the day.”

Besides DeSantis, a few other Republican political leaders have condemned Civics Secures Democracy. Former Secretary of State Mike Pompeo charged that the Biden administration was using a “strategy of soft coercion…to enforce radical woke curricula on our schools.” States, he declared, “will be forced to make a choice: alter their standards of curriculum to ensure the money flows in, or stay the course, and receive nothing.”

Donald Trump told the Faith and Freedom coalition, “Every conservative in the House and Senate needs to kill this bill and kill it immediately.” Newt Gingrich wrote, “I was shocked to discover that some Republicans had co-sponsored a truly radical, so-called civics bill designed to force every public school to teach racist left-wing propaganda.”

Across our nation, in promoting civic education, many in the Republican and conservative establishment seek “consensus” and “common ground” with the woke progressives. But what common ground is there with those who defame the founders as “enslavers”; portray America’s story as one of “systemic racism”; and reject the principle of human equality exemplified in the Declaration of Independence in favor of “equity” as manifested in the ubiquitous dogma of DEI?

Instead of playing a subordinate role in phony “consensus” projects dominated overwhelmingly by the progressive Left, conservatives should develop solid, accurate, patriotic curricular materials as a distinct alternative to the progressive narrative. This is already happening with Governor DeSantis’s reforms in Florida and the work of National Association of Scholars.

At the end of the day, we must realize that this is not a simply an academic argument, or merely a policy dispute over history and civics education, but a life and death regime struggle over the American Way of Life.

Read in the American Mind.