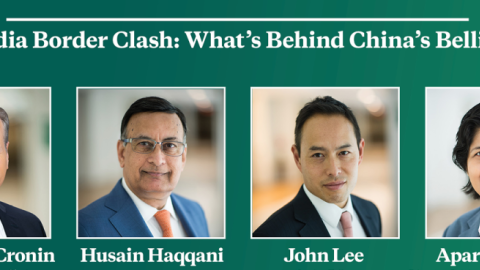 Patrick M. Cronin is the Asia-Pacific security chair at Hudson Institute. His research analyzes salient strategic issues related to US national security goals in the Indo-Pacific region and globally.

Aparna Pande is research fellow at Hudson Institute. Her major field of interest is South Asia, with a special focus on India, Pakistan, Afghanistan, foreign policy, and security.

Join Hudson Institute for a discussion on the recent deadly clash between India and China along their disputed Himalayan border. Hudson Director for South and Central Asia Husain Haqqani will moderate the event.

While the 2,167-mile-long mountainous border has periodically seen conflict between the two nuclear-armed neighbors, the current standoff has been the most violent in over a half-century. With China's recent power grabs in Hong Kong, its economic threats toward Australia, and its growing belligerence toward South East Asia, Japan, and Taiwan, how do the recent skirmishes connect to China's attempts at strengthening its global posture? Is the current standoff with India part of China's broader strategy? Does the power competition between the United States and China factor into the clash? How should the United States seize the moment to strengthen its partnership with India?

Our experts will address these and other elements of the on-going tension between the world's two most populous countries.