Bajwa’s Change of Heart on India Isn’t Enough. All of Pakistani Military Must Be on Board 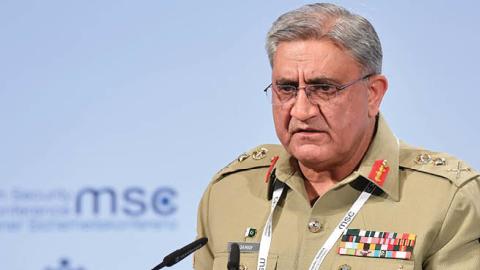 The call by Pakistan Army chief General Qamar Javed Bajwa on India and Pakistan to “bury the past and move forward” is music to the ears of his country’s citizens who have often been described as ‘traitors’ by the establishment for saying similar things.

That General Bajwa tied normalisation of India-Pakistan relations to “the resolution of Kashmir dispute through peaceful means” and made no mention of jihadi terrorism, makes it easy for Indian officials and commentators to shrug their shoulders and say, “What else is new?” After all, negotiations must always be preceded by trust between the parties and that is in short supply between India and Pakistan.

The overall tone of General Bajwa’s speech at the first-ever Islamabad Security Dialogue represented a subtle change of priorities in Rawalpindi. The army chief made no mention of Pakistan’s ideology, recognised the role of “politically motivated bellicosity” in derailing rapprochement between India and Pakistan, and acknowledged the primacy of “demography, economy, and technology.”

By refusing to identify India as a permanent enemy or an ideological rival, General Bajwa is trying to signal that he is the all-powerful military leader some in New Delhi have been looking for, who could settle matters with India’s elected leadership without fear of backtracking.

India’s past experience with Pakistan’s military leaders has made the leadership in Delhi particularly sensitive to intransigence in General Headquarters (GHQ), Rawalpindi. Most Indian experts on Pakistan list past attempts to cut deals with Pakistani generals, as well as civilians, to suggest that it might be a futile exercise.

General Bajwa is definitely different from his predecessors but that alone might not convince sceptical Indians, given the history of the two countries’ relationship. He is not an Islamist ideologue like Muhammad Zia-ul-Haq, nor does he have Pervez Musharraf’s arrogance or risk-taking instinct. The current army chief is more in the mould of Field Marshal Ayub Khan, a military man who feels that he must do something for his country, which is unlucky in terms of the quality of its political leaders. But General Bajwa seems aware of Pakistan’s limitations in a way Ayub Khan was not.

Ayub and Zia, the lost years

The Cold War had given Ayub Khan overconfidence in Pakistan’s potential. He thought that the United States and Britain were behind him, that he knew how to assemble a team of Pakistan’s ablest, that he alone could unite the nation, and that he had the formula to put Pakistan on the right track.

Ayub Khan became army chief within four years of Pakistan’s creation. He influenced governments from behind the scene between 1951 and 1958, and wielded dictatorial powers from 1958 to 1969.

Ayub Khan was invited to India’s Republic Day in January 1965. He sent his agriculture minister instead because he was busy preparing for the war, which broke out a few months later. His successor General Yahya Khan was in power at the time of the 1971 war over Bangladesh.

After the Simla Accord of 1972, there was some respite in India-Pakistan tensions during the civilian rule of Zulfikar Ali Bhutto. But once Bhutto was overthrown, his successor, General Zia-ul-Haq insisted that the Simla Accord had been signed under duress.

Zia regularly entertained Indian journalists and Bollywood stars, speaking of his desire for durable peace. But he planned and initiated the jihad in Kashmir after receiving US support for anti-Soviet Afghan Mujahideen.

During the decade of quasi-civilian rule after Zia, several rounds of talks yielded no settlement. Pakistani politicians took turns in blaming each other for ‘being soft on India’ and for not trying to secure Kashmir. Jihad in Kashmir intensified.

Musharraf’s removal from office made that agreement void well before it could be signed or made public. But the episode only added to Indian scepticism about back-channel negotiations.

For his part, General Bajwa joined the army several years after Ayub Khan had gone but seems to have fond memories of that era from his childhood. Pakistan functioned relatively efficiently then, at least for its elites. Foreign leaders and tourists could be seen visiting and respecting the country. International media did not always mention Pakistan negatively. The country did not need to borrow to pay off debts.

Much has changed in Pakistan since General Bajwa’s childhood. The country lost half its territory in 1971 but has quadrupled in population since then. Jihadi extremism and Pakistan’s approach to securing advantage in Afghanistan and against India, coupled with political uncertainty and economic mismanagement, has made the country poorer and weaker.

General Bajwa’s latest public comments only reaffirm what he has been saying in private, including to Pakistan’s opposition leaders. He says he wants Pakistan to become a normal country and understands that it would involve changing many things. But he needs the cooperation and support of several internal and external actors to succeed, which may not always be easy to get.

The army chief has privately conveyed the desire for talks with India about “non-interference in each other’s affairs and revival of bilateral dialogue.” His proposal envisages a step-by-step process. The first step, a ceasefire along the Line of Control in Jammu and Kashmir, has already been taken.

If India restores statehood to Jammu and Kashmir, Pakistan could declare it a confidence-building measure and discuss a 20-year or so moratorium. That would give Pakistan time to become normal and for India to continue to grow economically.

In General Bajwa’s narrative, he supported PM Sharif’s engagement with PM Narendra Modi and the opening of Kartarpur Corridor, and can be trusted to negotiate with the Modi government in good faith. He would like India and the world to look for alternative explanations for the terrorist attack in Pulwama while giving him credit for not escalating matters after India’s air strike at Balakot. But sceptics would still ask how he might succeed in ending pervasive hostility, built through decades of propaganda, where his predecessors failed.

After all, there are only 19 months remaining in General Bajwa’s extended tenure. He could always ask for another extension, which the law now allows as long as he does not reach the age of 64. That could see him in office until November 2024. Alternatively, he could ensure that his successor shares his views.

Could the complex India-Pakistan relationship be settled in that timeframe even if everyone trusted each other and there were no spoilers? In the past, Pakistani leaders (including those who combined the positions of president and army chief) found themselves out of office before their relatively late overtures to India could reach fruition.

Moreover, only a handful of Indian commentators buy the argument that better India-Pakistan relations might wean Islamabad away from deeper alliance with China or that India should re-engage with Pakistan just to test waters because nuclear neighbours cannot afford to ignore each other.

From India’s perspective, Pakistan has not dismantled its jihadi infrastructure and has not punished groups and individuals responsible for terrorist attacks targeting India. At a time when Pakistan’s economy is a mess and the country is under international pressure on more than one count, there might be a temptation to let Pakistan’s weaknesses run their course.

Many Pakistani civilians, including this columnist, have written and spoken of the need for normalisation of ties with India and ending support to jihadism as the pre-requisites for Pakistan’s political stability and economic progress.

We have paid a price for our stance and past military leaders have rushed to call us names and accuse us of being foreign agents for deeply held convictions. It is, therefore, encouraging to see that the army chief is articulating views similar to ours for a change.

Outsiders looking for signs of whether there will be a real change in the stance of the Pakistan military, as an institution, should see if there is any diminution in the tendency to look with suspicion upon advocates of fundamental change in the country, especially normalisation of India-Pakistan relations.