Biden Is Ignoring Pakistan. Here’s Why That’s a Mistake 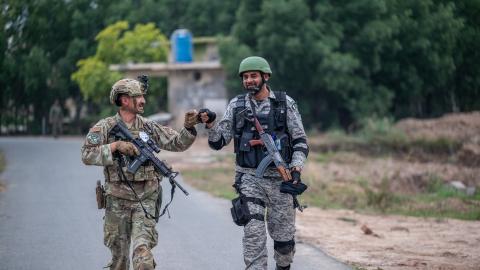 Pakistan, which was mentioned 19 times in President Obama’s 2010 national security strategy, is conspicuous by not being mentioned even once in the Biden administration’s strategy document released on Wednesday. The US withdrawal from Afghanistan has diminished American interest in Pakistan. But as a recent report written by several former diplomats and Pakistan experts, including me, points out, the choice for the US should not be between doling out large amounts of security and economic assistance to Pakistan and having nothing to do with it.

Maintaining a modest relationship based on mutual interests would make most sense and enable the US to retain diplomatic leverage. The Pakistan Study Group, which included former US Ambassadors to Pakistan Ryan Crocker and Cameron Munter, former Assistant State Secretary of State Robin Raphel and longtime Pakistan scholar Dr Marvin Weinbaum, among others, lays out the case for “pragmatic engagement” with Pakistan.

The history of US-Pakistan relations is well known. The two countries started out as allies in the 1950s before being described as frenemies over the last decade. A formerly warm relationship frayed due to Pakistan’s support for the Taliban in Afghanistan and the presence of large numbers of Jihadi militants on its soil. Americans have been particularly upset with Pakistan since 2011, after al Qaeda founder Osama bin Laden was found and killed there.

Pakistan insists that it simply acts in what its leaders perceive to be its national interest and sometimes that leads to divergence of views with the United States. American officials are beginning to realize that ignoring or trying to isolate Pakistan is not a smart policy option. The US maintains relations with a host of countries with which it disagrees. Why should Pakistan be different?

After a hiatus of a few years, Pakistan and the United States have started to re-engage, though Pakistan no longer features critically in US global plans, as the Biden administration’s national security strategy makes clear. Over the past few weeks, Pakistani Foreign Minister Bilawal Bhutto Zardari met with US Secretary of State Antony Blinken and Chief of Army Staff General Qamar Javed Bajwa met with Secretary of Defense Lloyd Austin.

These meetings reflect recognition that Pakistan, with all its complexities, cannot be wished away. It is the world’s fifth most populous country and is the only majority Muslim nation armed with nuclear weapons.

Moreover, the US has walked away from Pakistan before, in the 1990s over Pakistan’s nuclear program. That did not work out well for American interests as it only strengthened the most radical elements in Pakistani society.

But it is equally true that the Cold War-era considerations that brought Pakistan and the US together are no longer applicable. The two countries have very different views on India (which Pakistanis see as an enemy and Americans view as an essential partner), China (which is considered an “iron brother” by Pakistan but deemed a threat by the US) and Afghanistan (where Pakistan has consistently favored fundamentalist groups such as the Taliban against secularists preferred by Americans).

As the Pakistan Study Group report points out, the US and Pakistan have parallel narratives of their shared experience. They were preoccupied with confronting different enemies and pinning different expectations on their partnership. Instead of behaving like a quarrelsome married couple, it is time for the two countries to try to be friends who work together where they can and disagree honestly where they cannot.

The close China-Pakistan relationship at a time of deepening US-China rivalry should be a reason for greater, not less, American attention to Pakistan. In fact, even India, which wants Pakistan to stop supporting Muslim militants in the disputed Jammu and Kashmir region, should join the U.S to ensure Pakistan maintains a degree of sovereign autonomy over its actions and does not become a Chinese proxy.

Having started out as a security partnership during the Cold War, Pakistan-US relations in the non-security domains have never really expanded. Large-scale military assistance of the variety given to Pakistan during the Cold War is unlikely. But counterterrorism collaboration could continue and relations in other fields could expand. The essence of diplomacy is to understand the other’s interests and then try to find a way to work on areas of mutual concern.

Pakistan’s bilateral trade volume with the US of $6.6 billion is abysmally low. Expansion of commercial ties depends on economic reforms in Pakistan and must be led and sustained by the private sectors in both countries. But the US government could help provide market access for Pakistani products, encourage American investment and offer technical expertise. There is also potential for collaboration in the fields of energy, climate change and technology.