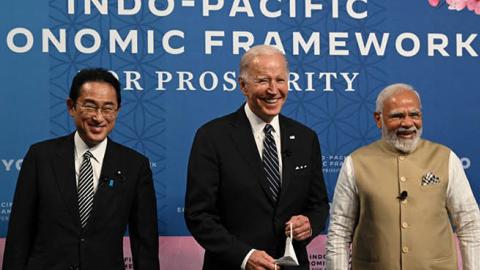 President Biden is in Asia, continuing the pivot to a region that is described as his administration’s top priority. But while his travels are taking him to South Korea and Japan, the U.S. president’s attention is more focused on Australia and India, both members of the Quad, alongside Japan and the United States.

Australia is expected to be a critical partner as the Quad evolves into a mechanism for facing China’s increasingly assertive and aggressive posture in the Indo-Pacific. India, on the other hand, is expected to rally other countries in realizing that China may now be a threat to the rules-based international order. With a population that nearly matches China’s, India is often characterized as China’s biggest potential rival in Asia.

Although the Quadrilateral dialogue has come a long way, surviving changes in leadership in the U.S., Japan and Australia, it isn’t deterring China. It lacks a hard power component, and India, while willing to partner on issues such as climate change and emerging technologies, has dragged its feet on becoming part of a U.S.-led security architecture for the Indo-pacific.

India lags behind China in economic and military capabilities. The United States, Australia and Japan have shown willingness to invest in building India’s capacity. Only recently there were reports of a $500 million military funding package from the U.S. for India that would deepen security ties and wean India off dependence on Russian military equipment. But India’s reluctance to get entangled in anything that resembles a military alliance remains an obstacle to the Quad’s evolution on anything more than what China dismisses as “ sea foam. ”

India faces a formidable challenge from China along the two countries’ 2,167-mile land border. Americans see the threat from China in maritime terms, and the partnership they envisage with India – in the Indo Pacific and through the Quad – reflects that focus. China has signaled to India repeatedly that the U.S. and its Quad would not be able to help India in a confrontation with China in the Himalayas.

Since April 2020, following an intrusion of the People’s Liberation Army (PLA) across the India-China Line of Actual Control (LAC), relations between these nuclear-armed neighbors have remained at an impasse. The two sides have held 15 rounds of negotiations in two years without a resolution of their border dispute. But India’s leaders are not willing to risk a complete breach in ties with China, while pursuing the Quad partnership with the U.S., Japan and Australia.

Indian leaders insist that China has disturbed three decades of “peace and tranquility” with its actions along the border, and India’s intention remains “to restore the status quo ante, as it existed in April 2020,” when Chinese troops moved into territory controlled by India. According to India’s new army chief, General Manoj Pande, China wants “to keep the boundary issue alive” instead of resolving it. A visit by Chinese Foreign Minister Wang Yi in March 2022 did little to change things along the border.

China’s policy seems to be to change the position on the ground, just as it has done in the case of islands in the South China Sea, leaving India to play catchup. In 2022 Chinese troops replaced prefabricated bridges across Pangong Tso, a lake that spans eastern Ladakh and western Tibet, with two permanent bridges. India has responded by increasing the number of troops on the border, while upgrading its ISR (intelligence, surveillance and reconnaissance) technologies and logistics capabilities with U.S. support.

Like their Japanese and Southeast Asian counterparts, Indian leaders had long hoped that the potential of the large Indian consumer market would convince China to avoid open confrontation with India. Only recently has India become willing to use economic coercion to force a resolution of the border crisis.

In 2020, India banned more than 60 primarily Chinese made apps, including Tik Tok. This was followed up in 2021 with the banning of around 120 apps belonging to tech companies such as Tencent, Alibaba and NetEase. In 2022, the Indian government seized $700 million in bank assets of Xiaomi, one of China’s largest tech companies, accusing the company of violating India’s foreign exchange laws.

China’s upping the ante on the border with India was based on the presumption that it would stop India from moving closer to the United States. Notwithstanding India’s hedging behavior in continuing talks with China and avoiding a formal alliance with the U.S., Chinese actions along the Sino-Indian border have only drawn India closer to the U.S.

At the Quad Summit in Tokyo, President Biden has an opportunity to ask Indian Prime Minister Narendra Modi what more the U.S. can do to strengthen India’s resolve in dealing firmly with China. Indian leaders know that while the United States and its partners around the world support India’s rise as a global power, China has long opposed India’s rise. What remains now is to develop a strategy that moves the Quad beyond vaccine diplomacy, climate change and technology to areas such as enhanced security, intelligence and military cooperation.