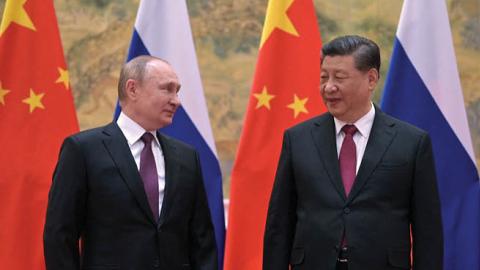 Vladimir Putin’s invasion of Ukraine presented Xi Jinping a choice: strengthen his evolving alliance with his authoritarian neighbor or recognize that his long-term interests lie with the market-oriented democracies, which are China’s biggest customers. Despite some early hesitation, perhaps in response to strong U.S. pressure, Xi is clearly siding with the Russian dictator. This is a consequential error for two important reasons. Most obviously, Russia offers little of unique value in terms of economic heft or dynamism that can reverse China’s slowing growth path. Second, Putin’s aggressiveness is drawing the U.S.-led democracies to closer cooperation.

China has effectively joined the revanchist Russian strongman in his drive to undo the post- World War II political order. This cooperation in the face of a brutal and unprovoked war is also likely to strengthen European resolve to oppose China’s relentless effort to dominate the global industrial economy and impose a new mercantilist order to replace the Bretton Woods system that anchored the post-war order.

China’s economic partnership with Putin’s Russia was stillborn at best. Russia’s commodity-dominated economy, suffering from demographic collapse and lack of innovative and entrepreneurial vigor, offers little to China other than a convenient source of oil, natural gas, some metal and grain. Russia has supplied advanced military equipment to China as it built modern capabilities. But China has already copied much of the underlying technologies and can produce them more efficiently than their northern partners—as is standard operating procedure for the Chinese with their trading partners. Seventy percent of Russian exports to China are in petroleum, natural gas and coal, all of which can be obtained from other sources.

As an importer and place to invest, Russia offers little of enduring value to China. Around one percent of China’s huge goods export machine, $49 billion in 2020, goes to Russia. In 2009, Putin agreed with Jiang Zemin on a list of over 200 infrastructure and development projects as something of a precursor to the Belt and Road Initiative (BRI). Five years later only ten percent of those projects were even started, even though Putin continually notes the need for massive infrastructure improvement. Despite a border stretching over 2,600 miles, there are only 25 border crossings between the two Asian giants. Many Chinese investments in Russian commerce have resulted in negative reactions by local populations and businesses, in a continuation of historical animosities. Numerous border disputes also persist and contribute to tensions. The BRI is bound to lead to more friction as much of it involves extensive development and trade with former Soviet territories.

China’s trade and direct investments with Western democracies dwarf those with Putin’s Russia. The U.S. and the EU collectively import nearly $1 trillion annually in goods alone from China, 20 times the level of Russian imports. U.S. and European capital markets are important sources of financing for China’s increasingly debt-ridden economy. Chinese firms listed on the U.S. stock exchanges are worth over $2.2 trillion, and sales of both sovereign and private sector bonds in Western markets are vital to maintaining liquidity in Chinese markets, especially the endangered real estate market. The still easy access of Chinese venture capital for Western startups is crucial for continuing its drive to acquire Western technology.

As this author and other analysts, including those at the IMF, have argued, China’s economy is slowing and because of its high levels of debt and a growing real estate crisis, is in danger of a downward economic spiral. In these circumstances China can ill afford to further alienate Western nations by siding with Putin’s reckless adventurism on the borders of Europe.

Europe already has a sizable trade deficit with China, reaching 207 billion euros last year. The iconic and huge German auto industry in 2021 was still operating at around half of its pre-pandemic levels and is not in a position to increase market share in China as the electric vehicle sector becomes more important to growth. The U.K. also had a sizable deficit with China of 40 billion pounds in 2021.

One important tool being deployed by China to address its own economic slowdown is to double down on its export-oriented economy. Persistent overproduction in China continues to result in trade surpluses, especially in goods, that undermine Western manufacturing. The U.S. has already imposed tariffs, export controls, and limits on Chinese investment to counter this mercantilism. Xi’s support for Russian efforts to undermine the postwar order can only reinforce European resolve to meet this economic and political challenge.

Europe’s citizens and leading industries are already feeling the impact of higher energy prices that their own anti-nuclear and anti-fossil fuel policies have engendered. Russia’s use of its dominant position in European energy markets where it provides 40% of natural gas imports has greatly increased prices this year. Prices of this low carbon resource are four to five times the levels in the U.S. China cannot help solve this problem for Europe and will only complicate the consequences of Europe’s dependence as it increases its own purchases of Russian gas. On February 4, Putin and Xi announced a new deal with China which will increase its pipeline imports by 25%. By 2025 the new pipeline will allow total Chinese imports equal to that of the Nord Stream 2 natural gas pipeline that Germany suspended after the Russian invasion of Ukraine.

It is worth noting that Russian natural gas production is by far the world’s biggest source of methane escaping into the atmosphere. Methane is several orders of magnitude more important to global warming than CO2, which certainly must be a factor to European policymakers as they consider the interaction between climate and international economic policies.

The U.S. in contrast can materially help with Europe’s energy problems which are now in at crisis levels due to the war. The U.S. has enough liquified natural gas (LNG) capacity to make up for the loss of Nord Stream 2, and potentially for Nord Stream 1 as well if the Biden administration does not block new natural gas, pipeline transport and LNG export capacity. Export facilities under construction and expected to come online this year alone will add enough capacity to replace Nord Stream 2, and Germany’s new government announced over the weekend that it will build its first two LNG import plants as quickly as feasible to begin replacing Russian suppliers. The Federal Energy Regulatory Commission has already greenlighted enough additional LNG export facilities to replace all of the Russian natural gas exports to Europe within the next few years. In short, the U.S. can be of important assistance to the EU in reducing its dependence on Russia if it eases antidevelopment policies impeding its LNG export capacity. This would help cement the reinvigoration of the U.S.-EU alliance.

China has little to gain economically from an entente with Russia and much to lose from Western sanctions. China’s economy is threatened by a severe real estate crisis and crackdowns on digital sectors. The Russian incursion into Ukraine, and the Western response to that aggression, will make Chinese economic recovery even more problematic. U.S. sanctions against China would be considerably strengthened by a joint approach with Europe, especially in matters like access to bank clearing procedures, capital markets and sensitive Western technology. Energy policy on both sides of the Atlantic can help deepen cooperation on meeting the challenge to the postwar economic order, which Xi’s mercantilism and support for Russian aggression has crystallized. Xi’s decision to back Putin, in short, will weaken China’s near- and long-term economic outlooks, which in turn could have domestic political consequences for Xi’s attempt to remain ruler for life.