China Tests Both Taiwan and the US 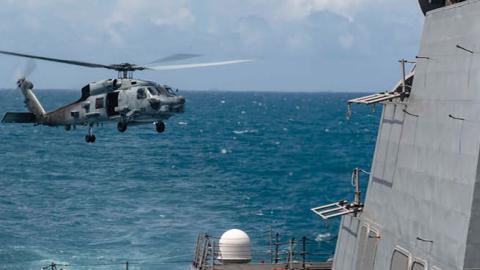 Since last Friday, 1 October, the Chinese Communist Party has escalated its incursions into Taiwanese airspace. Initially, this coincided with China's "National Day" on 1 October, marking the PRC's founding. However, PLA incursions continued after 1 October. From 1-3 October, the People's Liberation Army executed five major incursions into Taiwanese airspace, each of which was conducted with a dozen or more aircraft, the largest of which included 25 aircraft. Then, on 4 October, China conducted a 52-aircraft incursion into Taiwanese airspace, the largest operation of its kind that the PLA has ever conducted. The location of these incursions, and the strike packages dispatched, indicate that the CCP's actions are more than mere saber-rattling or domestic grandstanding. Rather, these actions are a calculated attempt to test Taiwanese defenses, identify weak points, and gather tactical and operational intelligence for a future attack on the island republic.

This strategy becomes intelligible when three factors are considered.

First, since 2019 the PLA has violated the Taiwan Strait’s “Mid-Line” in nearly every incursion, major or minor. The PLA did not violate the mid-line, the de facto maritime border between Taiwan and China, very often before 2019 – despite its expanding capabilities, and before 2019 Party leadership appeared to doubt the PLA’s capacity to gain air supremacy over the Taiwan Strait in an escalating conflict. The PLA’s most recent violations continue this trend of increased pressure.

Second, since the PLA escalated the tempo and scale of its violations in 2020, the composition of PLA strike forces has changed. The most frequent airspace violations remain small, and flights typically include one to two surveillance or maritime patrol aircraft, at times with fighter escort. Like those during the summer of 2020 and over the past three weeks, the most notable violations are much larger. Force composition in the largest six violations since the last full week of September is illustrative. China conducted the 23 September violation with 19 aircraft, including 12 J-16 fighters, two J-11 fighters, two Y-8 anti-submarine aircraft, one Y-8 electronic warfare aircraft, and two H-6 strategic bombers. The PLA conducted eight more violations between 23 September and 1 October, none with more than six aircraft.

However, the five violations from 1-3 October had a similar force composition to the 23 September violation. On 1 October, the largest incursion of 25 aircraft included 18 J-16s, four Su-30s, two H-6s, and one Y-8 ASW aircraft. The second incursion that day included 13 aircraft: 10 J-16s, two H-6s, and one KJ-500 AEW aircraft. The next day, the PLA conducted two incursions with a total of 29 aircraft. The first flight was comprised of 14 J-16s, four Su-30s, and two Y-8 ASW aircraft; the second 12 J-16s, six Su-30s, and one KJ-500. The fifth and most recent incursion of 16 aircraft occurred on 3 October, which unsurprisingly included eight J-16s, four Su-30 multi-role fighters, two Y-8 ASW aircraft, and two KJ-500s. These force composition similarities are remarkable. Each air group from 1-3 October, like the 23 September violation, has included a major fighter component screening a combination of strategic bombers, ASW aircraft, and AEW platforms. Indeed, this force composition is similar to another major violation, the 15 June 28 aircraft operation that flew along Taiwan’s eastern coastline.

Third, every violation that the Taiwanese Ministry of Defence has reported since June has pressured the exact same spot. China is targeting the southwest of Taiwan’s ADIZ, threatening the supply and communications line between Taiwan island and the Pratas Islands, Taipei’s claimed territory in the South China Sea. It is also targeting the Bashi Channel, the maritime link between Taiwan and the Philippine Archipelago, and one of two access points to the Philippine Sea for the PLA Navy.

Taken together, these three factors indicate a clear pattern. Over the past two years, the PLA has become far more aggressive, no longer simply probing in the South China Sea but also bracketing Taiwan with ground-based air forces. Its major airspace violations have escalated in intensity and scale – each of them is now a legitimate strike package, including a mix of anti-submarine aircraft and nuclear-capable bombers, escorted by a large fighter screen. And each violation now probes southwestern Taiwan.

The PLA reinforced this pattern with its actions on 4 October. Once again, the PLA Air Force threatened southwestern Taiwan, pressuring Taipei’s line of communications with its forces stationed on Pratas Island and raising the possibility of a broader offensive through the Bashi Channel. This flight, however, was of greater scale than any of its predecessors. It included 34 J-16s and two Su-30s – between two and three fighter squadrons, depending upon precise echeloning – two Y-8 ASW aircraft, two KJ-500 (AEW) aircraft, and twelve H-6 bombers.

The PLA’s actions have two clear purposes. First, the PLA Air Force seeks to wear down its Taiwanese counterpart by maintaining a high operational tempo, much as the China coast guard has done to the Vietnamese, Philippine, and Japanese navies and coast guards in the South and East China Seas. Last year, policing Chinese airspace violations cost Taiwan $1.09 billion (USD), around nine percent of its defense budget. The Taiwanese Air Force has 17 total fighter squadrons. But only six are equipped with F-16s, while five fly indigenously built F-CK-1Cs, three mid-Cold War F-5s, and three late-Cold War Mirage-2000s. By comparison, the PLA Air Force operates 10 fighter brigades in its Eastern Theatre Command, along with a bomber division and several attack brigades. This enables the PLA's higher operational tempo, increasing the wear and tear on Taiwan's air forces. The results of this strategy are already apparent: Taiwan temporarily grounded its F-5 fleet earlier this year after three crashes within six months.

The strategic location of this pressure indicates a second purpose, that of intelligence gathering. Once again, Taiwan has a limited first-rate fighter fleet. While the F-CK-1Cs are worthy aircraft, they are less advanced than Taiwan's F-16s, despite their upgrades since the early 2000s. And Taiwan still relies on three F-5 and three Mirage-2000 squadrons for air defense – that is, just over a third of its air superiority fighter squadrons risk being outmatched in an air campaign against China. Additionally, a Chinese attack on Taiwan is likely to begin with a simultaneous air campaign and missile bombardment intended to destroy as many Taiwanese fighters as possible on the ground, or at least destroy runways and hangar facilities. Thus, the Taiwanese must carefully select which aircraft are used for which missions. Major Chinese airspace incursions allow the PLA to observe how Taiwan reacts to various strike packages and estimate which aircraft it will deploy first in a broader conflict.

There is, of course, a final motivation for the PLA's behavior. Despite U.S. partisan vitriol, domestic squabbling, the existential language of political debate, and the reality of limited strategic bandwidth, the CCP correctly assumes that the U.S. will participate in a cross-strait conflict. Japan will as well, given its increasing public resolve to do so and its explicit political and diplomatic engagement with Taiwan. The PLA is a capable military force in certain respects. Quantitatively and qualitatively, it outclasses nearly every regional adversary. Given the disparity between Philippine, Vietnamese, and Chinese forces and the lack of American forward-deployment to the South China Sea, the PLA likely will be able to establish air and sea control in the South China Sea early in an Indo-Pacific war. Similarly, the PLA's missile arsenal and amphibious assault force are at this point large enough to launch a standing-start first strike against Taiwan and begin an invasion of the island, despite the unclear balance between Taiwanese and PLA ground forces. The Taiwanese Navy, moreover, has only two operational submarines, Dutch-built boats that have three decades of service each. In a direct cross-strait conflict absent external participation, the PLA could achieve the CCP’s strategic objectives.

External intervention transforms this calculation, given the air combat power of U.S. Carrier Strike Groups and the lethality and survivability of American and Japanese submarines – and perhaps even other allied submarines, given the increasing desire the U.K. and Australia have shown to counter China militarily. Defeating these submarines requires a comprehensive anti-submarine dragnet comprised of land-based ASW aircraft and ASW-capable surface combatants. Moreover, despite the range of Chinese ground-launched missiles, the PLA's most numerous anti-ship weapon remains shorter-range air and ground-launched cruise missiles. The PLA Navy's two CSGs have limited air wings with restricted ranges since the Type-001 and Type-002 lack a catapult launching mechanism. And the PLA Air Force fields too few tanker aircraft to support extended ground-based fighter operations further into the Philippine Sea, operations that would be critical to combating a U.S. CSG.

A large enough H-6 flight, equipped with air-launched cruise missiles, could remedy this range issue for the PLA. Protected by a robust fighter screen, coordinated by AWACS aircraft, and working in conjunction with ASW aircraft and surface combatants, the PLA Air Force can dispatch a force to Taiwan’s east, simultaneously threatening the island from a different angle and pressuring American CSGs in the western Philippine Sea. It is remarkable that the PLA’s 52-strong air group used to violate Taiwanese airspace on 4 October was comprised of precisely the aircraft needed to attack an American carrier and its escorts.

Is the current administration, the U.S., and its Navy on the war footing needed to defend against the attacks China is evidently preparing for?