Getting beyond the Past 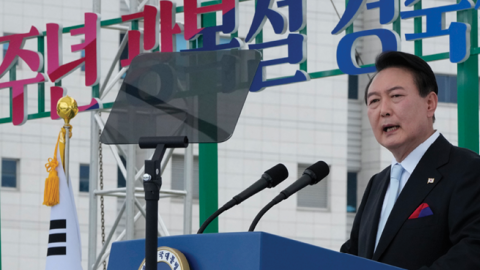 In 1904, a passionate 29-year-old Korean nationalist completed an inspiring manuscript from his prison cell in Seoul. Syngman Rhee’s The Spirit of Independence made compelling testimony for a free and open Korean society. Rhee sought to alert his fellow citizens about the impending threats to their liberty.

Japan’s 35-year-long occupation of Korea is an indelible part of history. But history should inform rather than impede the future. And both South Korea and Japan face an unparalleled opportunity to write a new and brighter chapter in their foreign relations.

Today, independence is imperiled by attacks on the liberal world order that South Korea and Japan have helped to build since World War Two. The maintenance of peace and order on the peninsula and across the Taiwan Strait; economic resilience from coercion and trusted supply chains; the protection of democratic governance from disinformation and cyber threats; stability of the world economy; and the preservation of the planet from climate change. From these and other hazards, Koreans must safeguard their freedom and sovereignty. To succeed, they will need to work closely with like-minded countries.

Russia’s invasion of Ukraine shattered European peace and the myth that autocratic and revisionist powers would be deterred from launching a war. Just as South Korea and Japan embraced NATO’s new strategic concept as a bulwark to peace, the two Northeast Asian democracies share an overriding common interest in dissuading Kim Jong Un from seeking to build and leverage a growing nuclear arsenal.

Recognition of shared interests does not alter historical facts. Japanese citizens must never forget how their government once exploited the Korean people. The intensity of the abuse grew as militarism gripped Japan and mobilization for war ensued. Koreans were forced into labor camps, men were conscripted into supporting the Imperial Japanese Army, and up to 200,000 young women were reduced to sex slaves on military bases.

But this bleak period represents only a portion of history. Postwar developments and emerging challenges underscore shared interests and values. South Korea and Japan have vital roles in upholding a rules-based order. They need to stabilize the past to work on their shared future.

Whatever President Yoon Seok-yeol lacks in experience, he makes up for with clarity of vision. His willingness to spend political capital overhauling ties with Tokyo offers Prime Minister Fumio Kishida a golden foreign policy opportunity. For all the late Prime Minister Shinzo Abe’s accomplishments, robust ties with Seoul were not among them.

The most recent crisis in Seoul-Tokyo relations began in November 2018 when the South Korean Supreme Court ordered Mitsubishi Heavy Industries and Nippon Steel & Sumitomo Metal to compensate victims of wartime forced labor. That same month South Korea compounded tensions when. It disbanded the foundation for compensating so-called comfort women. And old wounds were further opened when a South Korean Navy destroyer locked its fire-control radar on a Japanese patrol plane the next month.

The ensuing dispute and lack of trust put relations into a tailspin. By the spring of 2019, Japan removed three chemicals essential to South Korea’s semiconductor industry from its approved ‘white list,’ thereby hampering exports of critical materials.

Undoing these errant moves can give both countries a fresh start to concentrate on common challenges rather than rehashing past grievances.

First, President Yoon needs to ensure the successful creation of a public-private consultative body so that victims are compensated without undermining foreign relations, whatever the forthcoming judgments of an independent judicial system. Victims’ families understandably demand contrition for past mistakes. But a new generation of Japanese deserves not to be infinitely liable for compensation.

Second, Prime Minister Kishida needs to reciprocate by streamlining the process for ensuring that South Korean corporations have ready access to necessary materials for its semiconductor industry. Indeed, Japan should go further than this and propose to bring South Korea into discussions on securing critical supply chains and other issues that are being advanced through mini-lateral groupings such as the Quadrilateral Security Dialogue (or Quad) among Japan, the United States, Australia, and India.

Third, the Biden administration needs to follow through on its commitment to the two allies by incentivizing both allies to forge clear-cut rules of military engagement and mechanisms for resolving disputes. In addition, South Korea, Japan, and the United States should review contingency plans for responding to emergencies around the peninsula.

After these steps, the possibilities for expanding cooperation on issues challenging the peace and prosperity of all Japanese and all South Koreans.

It is time for the South Korean and Japanese people to invest more effort into their shared interests in managing mounting threats to their independence.

Read the translated version in the Dong-a Ilbo.