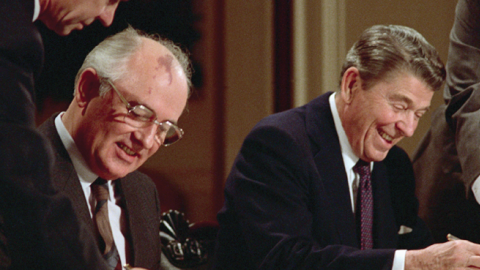 With the passing of the former general secretary of the Communist Party of the Soviet Union, Mikhail Gorbachev, the Cold War is back in the news. Prior to his death, and certainly, in the wake of it, several commentaries have credited him for ending the Cold War.

This is a common narrative and was summed up by one former American president who said that Ronald Reagan “was smart enough to allow the Cold War to end,” reflecting the idea that the US had previously largely perpetuated the conflict with the former Soviet Union and not Moscow.

The end of the Soviet Empire didn’t “just happen” but was the direct result of an extraordinarily active and complex action plan put together and implemented largely by three world leaders: Ronald Reagan, president of the United States; Margaret Thatcher, prime minister of Great Britain, and Pope John Paul II, the leader of the Vatican and the Catholic Church worldwide.

The three were elected to their respective offices separated by a mere 24 months between October 1978 and November 1980. At the time, the future of freedom and democracy looked bleak. After all, from 1969, nearly 20 nations had fallen to totalitarianism or communism, mostly joining the Soviet orbit during the decade of détente and peaceful coexistence, including all of Indochina, Afghanistan, Iran, Nicaragua, Grenada, Angola, and Mozambique. Not only was the Soviet empire rapidly expanding, but so was its nuclear arsenal.

Miraculously, a little more than a decade hence, the USSR empire fell apart, and from Canada to Chile, every nation in the Western Hemisphere was free except Cuba and Haiti. Eastern Europe and the “captive nations,” as they were once called, were free, and the Western Pacific economic “tigers,” such as the Republic of Korea, Taiwan, Indonesia, Singapore, Malaysia, the Philippines, and Thailand, expanded their economic relations around the globe.

How was this accomplished? After all, although unknown to the West, by 1975, the director of the Soviet KGB, Andropov, was worried the Soviet empire was on the verge of collapse.

Yes, as he knew, on the surface, the “correlation of forces” as the Soviets saw things were moving in Moscow’s direction. The US government was minimizing the Soviet threat, going through a lengthy fight over the GDP that Moscow spent on military goods with the “hawks” saying 20 percent or more, but the accommodationists at the CIA only agreed to a modest update of their numbers to 6 percent.

Andropov knew the real number actually exceeded 25 percent, but even with America still engaging in wishful thinking, without major changes, the Soviets could still not keep up with the worldwide technological revolution in space and military affairs that would eventually be adopted by the Americans and their allies.

Furthermore, to attract needed Western investment and technology, especially for its military, the USSR needed a “smiley face” to the world, and the current crop of Soviet leaders was simply not going to cut it in the new age of public diplomacy.

Andropov’s solution? Eventually bring onto the stage Mikhail Gorbachev, now in charge of Soviet agriculture, and groom him for the top job. Young, energetic, with an attractive wife, Gorbachev could pretend to be for peace, schmooze the West and save the Soviet empire.

But Andropov’s plans didn’t pan out.

Surprisingly, the president, the prime minister, and the pope joined forces to defend the West.

Thatcher allied with Reagan to deploy the US Pershing and GLCMs in Europe and challenge Moscow to end all Soviet SS-20 deployments. The pope made three pilgrimages to Poland in 1979, 1983, and 1987, brought major assistance to Solidarity in Poland, thus saving the one key center for liberty that would eventually unravel the Warsaw Pact, while Reagan orchestrated a major covert campaign of taking away the financial underpinnings of the Soviet empire.

As Myron Norquist explains in his 2001 essay “How Reagan Won the Cold War,” the US made the Soviet Empire vastly too expensive militarily to maintain while simultaneously taking away Western bank concessionary loans to Eastern Europe. Moscow’s foreign exchange dried up.

In parallel, the US military was fully modernized, especially its nuclear forces, while the Soviet-backed nuclear freeze was deep-sixed. In Granada, the first communist territory since 1917, was liberated by the US Marines, the US economy boomed, while Reagan explicitly rejected the soothing rhetoric of détente and peaceful coexistence. In fact, so brash was the American president that he publicly declared the US Cold War strategy was “we win” and “they lose.”

And indeed, when Gorbachev came into power in 1985, the previous weak America of 1980 was gone.

At first, Gorbachev tried to outmuscle Reagan. He sent more troops to Afghanistan, expanded the rate of deployment of SS-20 missiles, sent more military assistance to the Sandinistas and Cuba, and expanded Soviet defense expenditures.

In the spring of 1985, Congress agreed to deploy the new Peacekeeper missile, the centerpiece of the disarmament community’s wrath, while also proceeding with robust missile defense spending, which Gorbachev would repeatedly try to keep “in the laboratory.”

Then came the deciding hinge of history in the Cold War.

Despite martial law declared in 1981, Reagan and Pope John II kept Poland’s Solidarity Party and its movement alive. By 1988, the Soviets had a choice. Send in the tanks or allow Solidarity to be elected to power.

Even the dictator head of the Polish People’s Republic and then Chairman of the Council of State Wojciech Jaruzelski would travel to Moscow and report that if the Soviet tanks came, they would not only have to run over the body of Pope John II but Jaruzelski himself.

The Soviets were thus stuck since having to reflect their Western media coverage as “peace-loving,” invading Poland was out of the question.

Solidarity was elected to power, the first party devoted to liberty ever winning an election in all of the communist territories. The pope gave courage to additional millions behind the Iron Curtain, the “Iron lady” in Britain stuck with her friend across the pond, and of course, Reagan had famously dared Moscow to “tear down this wall.”

As they say, the rest is history.

Read in the Federalist.