How China Is Winning in the Pacific 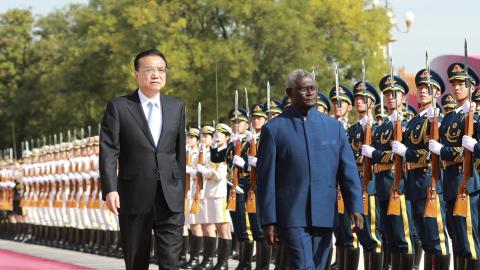 Caption
Chinese Premier Li Keqiang holds a welcoming ceremony for Solomon Islands' Prime Minister Manasseh Sogavare ahead of their talks at the Great Hall of the People in Beijing, China, October 9, 2019. (Xinhua/Pang Xinglei via Getty Images)

Solomon Islands is moving closer to China and further away from Australia and the West. Money in the form of Chinese trade and investment has something to do with it. But something else is happening. For self-interested reasons, Solomon Islands Prime Minister Manasseh Sogavare is allowing himself and his ­government to become captured by Beijing – materially and psychologically.

Beijing’s activities in the Solomons is a textbook case of how China seeks to prevail through subversion, influence, and disinformation against both willing or unsuspecting leaders, governments, and nations. These non-material strategies have significant strategic effects. Indeed, the Solomons is a worrying case study of how the Chinese Communist Party strives for every advantage in global affairs, and in particular to win without fighting and prevail against the West.

Chinese material offerings and non-material strategies are most tempting and effective when applied to leaders of poorly governed countries in strife and who face ­serious and growing opposition to their rule. The Solomons has long been dependent on outside assistance to support a precarious and uneasy calm. From 2003–17, the Australia and New Zealand-led Regional Assistance Mission to Solomon Islands (RAMSI) was deployed to avoid the near collapse of the state and its economy.

The Solomons shares the problem of many states whose economic fortunes are dependent on external aid: lack of local business experience and skills, poor employment opportunities, over-­dependence on unsustainable and low value-added industries, weak institutions, and poor governance.

This is where the relatively recent China factor comes into play. Chinese migrants dominate the retail sectors, especially in urban areas. With a low capacity to manage its national resources in a sustainable manner, Chinese state-owned and private firms are exploiting the mineral, forestry, and fishery resources of the country with little regard for sustainable or ecological standards.

The problem is not Chinese commercial activity, but rather the practices associated with “capitalism with Chinese characteristics” allowed to be imported into the country. Chinese businesspeople commonly bribe their way through government offices to secure licences, work and residential permits, and planning permissions, and Chinese entities occupy or create most of the prime retail sites. Poor environmental practices enabled by the bribery of officials, politicians, and locals characterise the country’s Chinese-dominated logging industry.

It is at this point that Chinese material offerings combined with influence operations come into play. China designs its political warfare to shape the thinking, decision-making, and practices of the target government and society, including the deliberate creation or exploitation of division within the country in ways that best suit Beijing. Conditions in the Solomons provide fertile ground for this approach.

China has directed much of its material largesse toward Honiara rather than provinces such as Malaita, the most populous and one of the most impoverished islands in the whole of the South Pacific. When Premier Daniel Suidani of Malaita objected to the switch of diplomatic recognition from Taiwan to China which occurred in 2019 and subsequently emerged as a leader in the Solomons anti-China movement, the Chinese embassy in the Solomons worked with Sogavare to attack and undermine him. At the same time, Beijing and Sogavare use the resentment and unrest in the country, which Chinese actions have exacerbated, to justify a deeper ­security relationship between the two countries, including Chinese training of Solomon Islands police following anti-China riots and protests. As increasing political tensions and divisions in the Solomons continue, the Sogavare government is becoming ever more dependent on comprehensive Chinese assistance to maintain power.

Supporting and exacerbating a country’s trajectory toward political and social division, economic vulnerability, deteriorating institutions, corruption, and media suppression increase the chances of Chinese cognitive and psychological capture of that country. As has occurred in places such as Cambodia, Laos, Sri Lanka, the Maldives, and now the Solomons, the leader and government become increasingly accepting of, and dependent on, Chinese Communist Party perspectives and ­solutions. That country thus becomes less able to chart its own ­independent and sovereign course, while the leader or regime becomes increasingly reliant on Chinese approaches and ways of thinking.

Chinese offerings of immediate and guaranteed gains in the form of huge politically motivated infrastructure and other capital investments enable a kind of cognitive and psychological capture to which leaders such as Sogavare willingly submit. After RAMSI, Chinese strategic messaging began to suggest that the Solomons could become more economically vibrant and self-reliant despite its national, institutional and governance failings – provided it embraced a relationship with China. This contrasts with the relatively strict conditions imposed by Western nations on other countries and the related conditions for transparency and higher standards on leaders and their regimes.

Moreover, Chinese framing has Western nations seeking to exclude China from the South Pacific to perpetuate their domination from a bygone era. In contrast, Beijing claims to seek a presence to further friendships with the island nations without demanding that other countries be excluded.

This framing makes China seem much more reasonable than the US, Aus­tralia and other allies and helps explain Sogavare’s dismissal of American and Australian concerns regarding the China-Solomons security deal as “nonsense” while declaring that the Solomons has “no intention of pitching into any geopolitical struggle”.

This provides some context for Chinese Foreign Minister Wang Yi’s response to criticism of Beijing’s relationship with Honiara in saying that “the countries have respected each other, treated each other as equals and supported each other in pursuit of common development”.

Additionally, “both sides should be wary of the attempts by a handful of countries, holding onto a Cold War mentality, to interfere in other countries’ internal affairs in the name of human rights”.

That the Solomon Times uncritically reported Wang’s views speaks to the extent to which Beijing has been allowed to co-opt or coerce a poorly resourced local media sector into reporting favourably on the bilateral relationship. Beijing has significantly increased its engagement with media in the South Pacific and offers funding and career opportunities in return for outlets and journalists portraying Chinese actions and intentions in sympathetic terms.

Since Beijing first opened a branch of Xinhua in Suva, Fiji, in 2010, China has funded a growing number of Pacific journalists to attend professional training in China, and China’s Ministry of Foreign Affairs Information Department, which leads the public presentation of Chinese foreign policy, has organised several official tours for Pacific Island journalists over the past few years.

Finally, the extent of the complicit cognitive and psychological capture is evident in Sogavare’s praise of China and criticism of the West. In a speech to his parliament, the Solomons leader accused Australia and its allies of undermining his government, criticised the Western response to Russia, and praised China’s treatment of Christians, who were reported to be thriving because they were following rules set by Beijing.

He also accused activists critical of his closeness to Beijing of having “fallen prey to the Western world” which was manipulating them, and termed these civil society groups as “racists” and “bigots” expressing irrational hostility toward China. He also accused the US and Australia of threatening the Solomons with “invasion” should a Chinese military base be placed there.

These arguments are very similar to those offered by Chinese officials and represent targeted disinformation campaigns undertaken by the CCP and People’s Liberation Army, which state-owned and sympathetic media then reproduce and distribute.

An opinion piece in the state-owned Global Times argued that US interference in the South Pacific is the primary cause of instability and tension there and accused the West of treating ­Pacific Island countries as pawns in seeking to maintain its hege­mony and restrain China’s irresistible rise.

While China is helping developing countries reach their potential, Western nations remain mired in a colonial and prejudiced mindset. The notion that the West is threatening the Solomons with military action is a proposition frequently put forward by Beijing.

While those in the West tend to treat these views as absurd, conspiratorial, unconvincing and self-serving, their frequent and relentless propagation has important effects. In the context of grand narratives based on the spectacular and unstoppable rise of China, they offer a ready-made framework for the captured – whether willingly or unwittingly – to explain and justify their actions.

In the case of the Solomons, the Chinese Communist Party is offering not just a seemingly attractive economic and security arrangement to an insecure leader and government, but also a framework and mindset to complement and complete the package deal.

Australia’s many years of supporting the Solomons counts for little when an increasingly desperate leader believes China holds the key to him maintaining power.

Once governments out themselves in this position, promises that Australia remains the preferred partner will not amount to much. Neither will better credentials when it comes to confronting climate change move the dial. If Sogavare really cared about this issue, he could hardly consider China as a new best friend.

We can no longer assume our way of doing things and helping other nations is inherently more attractive than the autocratic alternatives. We are in a region filled with insecure autocrats and leaders losing faith in the effectiveness of democracy, and nations with fragile institutions and fractious societies.

All this is being exploited by Beijing engaging in a form of political warfare designed to subvert, influence, and disinform.

If we do not do more to counter all this, then Beijing is several steps closer to getting the region it wants without even a shot being fired in anger.