Iran Is Not the Answer to Europe's Energy Crisis 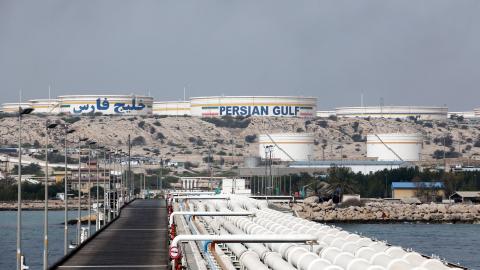 With winter just a few months away, policymakers in Europe are scrambling to mitigate the impact of a looming energy crisis. Even before Russia’s invasion of Ukraine in February, Europe was already facing high energy prices. Now they have soared even higher.

The cost per megawatt of electricity in Germany and France was ten times higher last week than at the same time last year. Globally, crude oil prices are higher than they have been in several years. European gas prices are also increasing year on year.

There are some plans to reduce European dependency on Russian energy. The EU will implement an embargo on Russian oil at the end of this year. There are plans to diversify away from Russian natural gas too. Recently the EU signed a deal with Azerbaijan to import more natural gas from the Caspian region. Italy and France are looking at options to import more gas from North Africa. However, the process to diversify from Russian natural gas has moved at a snail’s pace. Meanwhile, Europe still pays Russia billions of euros each week for natural gas. This dwarfs the total amount of EU military and humanitarian aid given to Ukraine, so ironically the EU is actually funding the Kremlin’s war effort.

As European policymakers become more desperate to find alternatives to Russian energy, they are looking toward Iran. The desperation for new sources of oil and gas explains the recent enthusiasm by some Europeans, and the Biden administration, to secure a new deal with Iran over its nuclear program. Iran’s Oil Minister, Javad Oji, said recently that Tehran was ready to help Europe with its energy crisis, and many Europeans naively believe Iran has something to offer.

But the hope that Iran can come to Europe’s rescue is not aligned with reality. Iran produces a lot of natural gas, but most is for domestic consumption. What little gas may be available for the EU lacks the required pipeline and other infrastructure for export to Europe. In terms of oil, Iran is better placed to help, but there are still challenges. Even if a new deal between the international community and Iran were signed tomorrow, it could take months to pick apart that vast economic sanctions regime currently in place. During this time, no oil would be exported to Europe. On top of this, Iran lacks the proper infrastructure to export significant amounts of oil to Europe because of years of chronic under investment. So in the case of Iranian oil and gas to Europe, whatever could be exported would probably be too little and too late for this winter.

Then there is the moral question about shifting energy reliance away from Moscow to Tehran. Europe’s Russian gas pipeline debacle — Nord Stream 1 suffers frequent closures for what Moscow calls “maintenance,” and Nord Stream 2 is unlikely ever to be operational — are a reminder that dealing with such regimes is fraught with geopolitical risk. Also, Iran has been providing Russia with armed drones to be used in Ukraine. Is it wise to buy energy from a country enabling Russia’s war?

In the short term, EU policymakers are doing everything they can to prepare for the coming winter. The good news is that natural gas storage facilities are on average 80 percent full, largely thanks to an increase in LNG imports mainly from the US and additional piped natural gas from places other than Russia. If thiswinter is not unusually harsh and cold, the EU just might get by.

In the meantime, Europe needs to learn the lessons of how it got into this crisis to begin with. The inconvenient truth is that an addiction to cheap gas from Russia, a religious-like determination to implement a green agenda at all costs, and a rejection of nuclear power based on emotion rather than science, created this crisis.

In the longer term, every barrel of oil and cubic meter of natural gas that Europeans obtain from somewhere other than Russia and Iran will make the continent safer. While the immediate priority for Europe is getting through this winter, in the long term it must develop a new energy strategy.

The recent agreement between the EU and Azerbaijan to increase natural gas exports from the Caspian Sea is a great first step, but Europe can do more. For example, the EU can work with Turkmenistan to encourage the construction of a trans-Caspian pipeline to bring natural gas from Central Asia to Europe while bypassing Russia and Iran. Europe can also do more to explore energy possibilities in the eastern Mediterranean and North Africa.

Meanwhile the Biden administration needs to remove the red tape that prevents the US energy sector from reaching its full potential. The more American oil and gas that can be exported to Europe, the better.

If steps are taken now, Europe can be on the path to energy sector for the first time in decades. Now is the time for action.