It’s Not Just Money That Enables China To Buy Influence 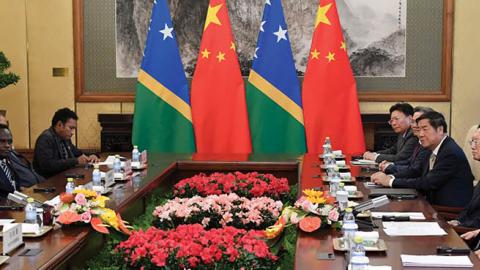 China already has a foreign naval base in Djibouti, which is strategically located in the Horn of Africa. The draft security agreement with Solomon Islands means it is closer to establishing another one less than 2000km to the northeast of Australia.

Why is this happening? Some are blaming the Morrison government for not giving more aid and doing too little about climate change. Others point to the deluge of Chinese money that buys influence and, as it turns out, perhaps a military base.

The latter is a big part of it, but Beijing’s approach is much more cunning and insidious than simply throwing money around.

The easiest charge to dismiss is that Solomons Prime Minister Manasseh Sogavare’s decision is driven by anger over Australia’s alleged climate change inaction.

If that were the case, Beijing would be the last in line to benefit. China is the largest carbon emitter and its future pledges are no longer believable. Xi Jinping recently conceded just that by declaring economic goals would be prioritised over environmental ambition.

But Australia is already the largest bilateral donor to the Solomons and, along with New Zealand, provides about 55 per cent of total aid to the South Pacific. As any Coalition or Labor government will discover, more aid does not equate to proportionately more influence.

We need a better understanding of what China is doing. Money clearly has something to do with it. Chinese aid to the Pacific increased rapidly from about 2009 and might have reached its peak by 2018. But it remains one of the top four donors, even if Chinese assistance is far short of that given by Australia and New Zealand.

It is not the amount but how Beijing has directed and leveraged its financial contributions that is worrying. The aid has been used to create privileged entry points for Chinese state-owned and private firms to fund and build projects as part of the Belt and Road Initiative.

In the Solomons and elsewhere, Chinese firms build prominent structures such as sporting stadiums, roads, bridges, power infrastructure, school buildings and community centres. Many initially assumed it was just about getting the Solomons to sever formal ties with Taiwan, which it did in 2019.

Getting the Solomons to abandon Taiwan was only one objective. China implemented what could be termed its Djibouti strategy. This involves Chinese firms buying and further developing capital assets, building ever-expanding logistics facilities around them, and developing ever more extensive dual-use civilian assets that could have military applications. Borrowing straight from the Djibouti playbook, the draft agreement opens the way for the Solomons to request Chinese military and police assistance for almost any reason agreed to by both sides.

This includes the protection of the roughly 3000 Chinese citizens working in the Solomons as well as Chinese assets and projects in the country. Once Chinese military and security forces arrive, they tend to never leave.

Why would political elites in the country agree to such terms, let alone a potential foreign military base? There are accusations that some MPs were bribed to change allegiances from Taipei to Beijing, and this is the parliament that will vote on the draft security agreement.

But it is not just an open-and-shut cause of some MPs selling out their country. Beijing is successfully peddling a dishonest but compelling narrative: while democracies such as Australia, the US and Japan are imposing their First World standards of transparency and accountability on poorer states, China promises guaranteed and immediate gains to fast-track economic development. The further sales pitch to political, business and community leaders is that Australia and others want to keep China out of the South Pacific to perpetuate their domination from a bygone era. In contrast, all Beijing wants is a presence to further a friendship with the island nations without demanding the democracies be forced out.

This framing makes China seem much more reasonable than Australia and its allies. These Chinese messages are spreading in countries such as the Solomons, Fiji and Papua New Guinea to augment the effectiveness of economic inducements on offer.

It helps to explain why Sogavare dismissed Australian and New Zealand concerns with the China-Solomons security deal as “nonsense” while declaring the Solomons had “no intention of pitching into any geopolitical struggle”. If one accepts there is a moral equivalence between the economic and military presence of the democracies, on the one hand, with that coveted by Beijing and the People’s Liberation Army on the other, then China has the advantage.

We know this to be a falsehood given the numerous instances of buyers’ remorse after China was allowed to consolidate its foothold in developing countries. Yet democracies remain too polite and reluctant to engage wholeheartedly in political warfare, even though what we bring to the table is usually superior – and such warfare is being successfully deployed against our interests.

An effective Pacific “step up” is not just about giving more money to countries. We need to win the information and influence war by going on the offensive.