Why Joe Biden Faces a ‘Decisive Decade’ in Contest with China 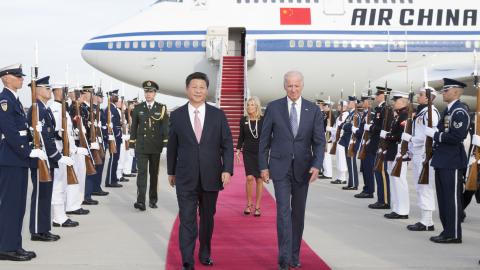 Caption
Joe Biden welcomes Xi Jinping for his first visit to the United States at Andrews Air Force Base in Washington, DC, on September 24, 2015. (Xinhua/Huang Jingwen via Getty Images)

Last week, the Biden White House released its long-awaited National Security Strategy to frame and guide US foreign policy. Trump’s America First sloganeering was gone, and a greater nod was given to shared global challenges. But even the most die-hard Democrat will admit that the 2022 version reinforces key foreign judgments made by the previous administration. In particular, the new strategy offers the assessment that the most pressing strategic challenge is from states that combine authoritarian government with a revisionist and aggressive foreign policy.

Russia poses the most immediate threat. But China is identified as the only authoritarian nation with the intent to reshape and lead an alternative international order, and is accused of relentlessly developing the economic, diplomatic, military and technological means to do so.

Some in Australia and the region will reject or ridicule the democracy versus authoritarian framing in the document. They argue that America has authoritarian allies, such as Saudi Arabia, while many of our strategic partners in the Indo-Pacific are imperfect democracies or outright authoritarian states.

This is a straw man argument. The challenge is not the existence of authoritarian states per se but the fact that the most dissatisfied, revisionist, disruptive and assertive states are invariably authoritarian: think China, Russia, North Korea and Iran.

The world is more complicated than an easy separation between goodies and baddies and there is complex history behind where we are today.

The autocratic regimes in these countries have disagreements among themselves, and they do not always act in unison. But they seek to challenge existing territorial boundaries, are intent on altering or undermining regional and global institutions, are preparing to use force or other forms of coercion to achieve their aims, and distrust and reject American pre-eminence. In these cases, their authoritarian institutions enable and perpetuate these hostile mindsets.

To be sure, the world is more complicated than an easy separation between goodies and baddies and there is complex history behind where we are today. China is also different to these other autocratic states in important ways – more of this shortly.

But the assessment that certain authoritarian states pose the greatest challenge to American interests, regional stability, and liberal institutions and norms is indisputable. With autocrats imposing their will over world affairs as they are, a sensible White House could hardly come to any other conclusion.

The security document puts more emphasis on successfully competing with China over the course of this decade than any other single factor. Why this decade? The document doesn’t say so but the American assessment is that relative Chinese comprehensive power will probably peak up to the 2030s before subsiding (in relative terms). Structural economic and demographic factors will soon become a serious drag on the accumulation of relative Chinese power.

The period of American and allied complacency is ending, but it will take time for democracies to adjust to serious competition and respond. Therefore, Beijing’s greatest window of opportunity to prepare the ground for eventual pre-eminence occurs this decade. Incidentally, this decade is also likely to be the last opportunity for Xi Jinping, 69, to realise his China Dream, which includes seizing Taiwan.

What does a credible strategy to compete with China require? Away from the military dimension, the document recognises that China is different to other authoritarian rivals because it has more material ability to seduce and reward states rather than simply coerce or impose costs on them.

Moreover, China is not just a wrecker of existing institutions and rules but a creative and cunning custodian and sponsor of new ones that suit its narrower interests. This means there are considerable real and opportunity costs for other states to simply join with America to oppose or block Chinese actions.

There is no magical silver bullet to meet these challenges in the form of a single American policy. However, and to counter those doubting American staying power and reliability, a compelling move would be for the administration to begin the process of seeking membership in the Comprehensive and Progressive Agreement for Trans-Pacific Partnership.

In and of itself, America’s vision of a Free and Open Indo-Pacific and Indo-Pacific Economic Framework for Prosperity are attractive ideas. But unlike Chinese offerings and promises, these American initiatives do not necessarily provide countries with guaranteed and immediate gains – the latter being especially important to low- and middle-income countries.

American membership would offer other CPTPP nations enhanced access to the unrivalled American market while allowing Washington much greater power and leverage to do what it is promising such as refashion critical supply chains, shape relevant standards, principles and rules. This will lead to further American-led agreements and institutions.

With America as a member, other countries will find it much easier to resist the pressure China is placing on them to support China’s application into the CPTPP – a strategic disaster for Washington and the region if China were to join in America’s absence.

Finally, the commonplace assessment that it is not politically feasible for America to join the CPTPP is untested and should be taken with a grain of salt. The Obama, Trump and Biden administrations have not spent real political capital on explaining the importance of American membership and the benefits of the CPTPP to the domestic American economy.

If Biden is serious about his own National Security Strategy, he should immediately begin this conversation.

Read in the Australian Financial Review.