Putin’s Nuclear Threats in Ukraine War–Here’s How US, Allies Must Respond 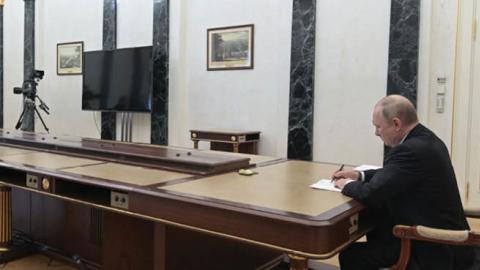 Vladimir Putin has ratcheted up his nuclear threats during his war of aggression against Ukraine. His purpose is to coerce Ukraine and its many international backers to give him what he wants.

Putin has publicly directed Russian forces to alert its nuclear forces. Last week he issued a barely veiled nuclear threat when he warned that any attempt to interfere in his attack against Ukraine would lead to "consequences you have never seen."

Russian officials have made veiled nuclear threats against the U.S. and NATO in the recent past but doing so while Russia is undertaking a massive invasion of the peaceful cities of Ukraine and failing to quickly achieve the military victories that Putin seemed to have been sure of, makes his threats more significant. And the new threat of nuclear alert implies Russian nuclear weapons are more ready for timely employment.

This moment calls for U.S. and ally sobriety, calmness and humility. It is a mistake to brush off these threats as though we know for certain Putin is bluffing.

Putin fundamentally distrusts the United States and our allies. It is why the Biden administration’s offers to discuss arms control and transparency measures of U.S. defensive military sites in Poland and Romania have been ignored by Putin. Such gestures do not allay Putin’s paranoia nor satisfy his genuine aims. And now, given the enormity of the pain of sanctions against Russia, it is possible Putin now believes even his rule hangs in the balance.

Putin’s recent speeches add to the long record of evidence that many Western scholars and governments have found hard to take seriously – he believes he has a right to invade sovereign nations to conquer people based on their ethnicity and traditions. It is why the Western focus on the question about further expansion of the NATO alliance misses Putin’s far more expansive and indeed imperialist aims.

The Biden administration’s failure to appreciate Putin’s objectives to this point should spur U.S. officials to listen to the counsel of military leaders like the commander of U.S. Strategic Command, Adm. Charles Richard, who has been warning about Russia’s nuclear weapons expansion. This is a moment to reexamine Biden officials’ assumptions about Putin, the critical role of U.S. nuclear deterrence, and to take a far more clear-eyed assessment of the risks before they respond.

This is no time to go weak-kneed and simply give in to Putin demands for fear of maximum Russian nuclear attack. This would almost guarantee further Russian aggression and communicate to other revanchist nations like China that nuclear threats work. Instead, we must focus on compelling Putin to cease his aggression and deter him from escalating the situation to the point of crossing the nuclear threshold.

Russia famously has a massive nuclear arsenal, but the type of nuclear weapons and the way Russia might employ them matter. Many Americans immediately become fearful of the notion of a Russian nuclear weapon landing in an American city. But that is not the most likely kind of nuclear threat Putin is making at this time.

Russia has invested in thousands of shorter-range and relatively lower yield nuclear weapons that are completely unbound by treaty that it could conceivably employ in theater. By threatening any kind of nuclear employment Putin might think it gives him greater leeway to pummel Ukraine at the conventional level even as it does so with greater brutality and with higher civilian casualties.

And if he begins to lose, he just might employ one of these theater nuclear weapons either in Ukraine or possibly even against a NATO ally in the hope that Ukraine will immediately beg for peace, and the U.S. and our allies would support Russia’s aims rather than retaliate with nuclear weapons and risk escalating the horrific war even further.

The United States must convince Putin that if he were to do that we would not back down and would not sue for peace. Should Putin drastically change the nature of this war, either by crossing out of the conventional domain or by threatening a NATO country with whom we have official commitments, the United States, with NATO, reserves the right and has the credible ability to retaliate in such a serious way that Putin will regret his decision.

To put a finer point on it: we have theater-range nuclear weapons too and they better believe we are ready and willing to employ them in our defense. By credibly communicating our resolve, the more likely we are to deter Putin.

We can do that by orchestrating right now a massive U.S.-led NATO military exercises, including with nuclear delivery systems, in tandem with the issuance of official Pentagon statements that we have resolve and commitment. Additionally, Secretary of State Antony Blinken should promise to commit to further improvement and adaptation of our nuclear deterrent.

We are seeing in real time the rightful purpose of U.S. nuclear weapons – they are to deter unjust aggression against the United States’ vital interests and to preserve peace. We must make that clear.