The Challenge From Within: European Unity and the Human Rights Issue 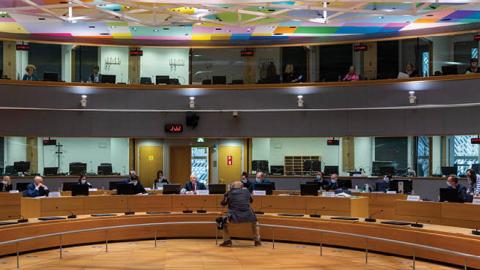 The EU is committed by treaty to the values of human dignity, freedom, democracy, equality, the rule of law, and human rights. The EU was awarded the Nobel Peace Prize in 2012 for its work on these issues. According to the Nobel committee, the stabilizing role that the EU has played has helped transform most of Europe from a continent of war to a continent of peace. The rise of authoritarian populist governments in Europe, however, has challenged these normative foundations of the EU and provoked considerable debate. EU skeptics argue that the greatest threats to European human rights unity do not come from external sources such as China and Russia, but from Europe itself.

Much attention has been given to the rise of parties in Europe with hard-line views on immigration and national sovereignty. Hungary and Poland have been singled out as EU countries that do not subscribe to basic European values of human rights. They view states such as Singapore, China and Russia as political models, while abolishing independent judiciaries, changing the electoral system to favour the incumbent, exercising political control over the media, and nationalizing large parts of the private sector. Such reforms constitute a broad assault on European political, economic, and social values.

Despite all the fuss about the rise of nationalist populist forces in Europe, even in the most hard-nosed nationalist Eastern European countries there is little appetite for leaving the EU. A Spring 2019 Eurobarometer survey found that 61 per cent of respondents in 28 EU member states, including the UK, believe that their country’s EU membership is beneficial, and 68 per cent believe that their country has gained from being part of the EU. Support has returned to the peak level last recorded between the fall of the Berlin Wall in 1989 and the adoption of the Maastricht Treaty in 1992. If a referendum on membership were held in each of the 28 countries in 2019, an absolute majority of respondents in 25 member states would vote to remain in the EU, while a plurality of respondents still share this view in the remaining 3: Italy, the Czech Republic, and the UK. An autumn 2020 Eurobarometer survey found that the EU’s respect for democracy, human rights, and the rule of law is its most important asset, with 32 per cent of respondents and 14 countries ranking this asset as number 1. The main bearer of anti-liberal values in public among the EU heads of state, Hungarian prime minister Victor Orbán, is reportedly among the most cooperative participants in the EU’s work on most internal issues.

These trends indicate that there is strong support for European unity because of a widespread recognition that only if Europe acts collectively will it carry enough weight to exercise influence in an era of US-China strategic competition. The political chaos of Brexit has driven the point home in EU-skeptical countries that they must work within the union to exercise influence. The 2019 elections for the European Parliament drive this point home. Nationalist populist parties did not see the broader gains that many polls had projected. Although these parties did win a majority of the national vote in France, Italy, and the UK, there was a surge in support for liberal and green parties in France and the UK, as well as in Germany. Perhaps more importantly, the differences within nationalist parties over issues such as migration and Russia cloud prospects for a united political right. The big voter turnout for the elections may be the most important trend. More than 50 per cent of European voters participated, which was the highest turnout in two decades and a sharp increase from the last election in 2014. The high turnout testifies to the widespread recognition in Europe that Brussels has a major influence on people’s lives. That realization bodes well for Europe’s ability to move toward greater unity.

The rise of authoritarian populism reflects greater popular engagement in Europe, and with that comes a wider spectrum of voices, including those critical of EU institutions and principles. This development does not mean that Europe is abandoning its value base. High profile human rights violations such as China’s imposition of a draconian national security law in Hong Kong and its human rights abuses inflicted upon Muslim ethnic minorities in Xinjiang have been met with EU sanctions.

Less publicized violations of fundamental liberal values, such as Chinese encroachments on freedom of navigation and overflight rights in the South China Sea, are also increasingly met with a European response, such as operations in support of freedom of navigation from countries such as France, the UK and Germany, backed up by common EU statements in support of the values. Even if only some countries take action on the ground, it will still be read as Europe acting if the major European countries take part. In future, direct ties to European economic and security interests are necessary to ensure European agreement on policies that defend specific values. Arguments of the connections between European values and interests will increasingly define Europe’s future international engagement to overcome divergent European views on which values should define regional policies. Interest-based policies and the realization that European unity is necessary to exercise influence in a world of volatile alignment patterns and faltering global institutions will allow EU institutions to accommodate the rise of authoritarianism and nationalism.