The Costly Contradictions of Biden’s Crusade for Green Energy 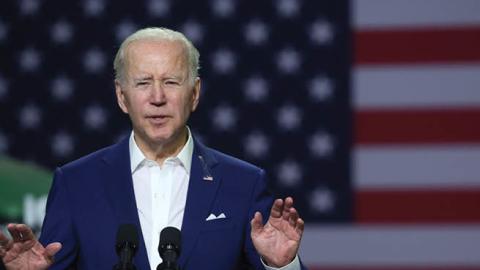 Caption
U.S. President Joe Biden speaks to guests during a visit to POET Bioprocessing on April 12, 2022 in Menlo, Iowa. Biden announced that he would ease restrictions on ethanol use to help ease soaring gas prices. (Photo by Scott Olson/Getty Images)

President Biden’s energy program is crystal clear: an all-of-government assault on the domestic fossil-fuel industry to further a green agenda. But its economic and political fallout is a muddled contrast. The Biden plan distorts or undermines so many other domestic and international priorities that it is in dire need of a midcourse correction.

The administration’s efforts, led by climate czar John Kerry and propelled by the progressive wing of Mr. Biden’s coalition, have included curtailing new leases for drilling, preventing new pipeline development, and expanding the areas off-limits for production. The Securities and Exchange Commission has discouraged new financing of fossil-fuel projects. New automobile mileage standards and increased mandates for ethanol blending in gasoline are part of the program. Pressure to phase out coal-fired electricity production and thwart new mining projects also contribute to the higher prices deemed the best tool to force the transition to a green-energy infrastructure.

To avoid the political brunt of historically high consumer energy prices, the administration apparently is considering allowing more exports of oil by Iran, as it is for Venezuela. It is also tolerating the somewhat inconsistent application of oil and gas embargoes on Russian supplies and increased purchases by China and India.

Despite the urgent global need to displace supplies of Russian oil and gas, encouraging domestic production of these fuels isn’t part of the administration’s response to Vladimir Putin’s aggression in Ukraine. And pressure on domestic production undermines other administration initiatives, such as rebuilding the manufacturing sector, creating jobs, strengthening supply-chain resilience, and weakening dictatorial adversaries such as Iran and Venezuela.

On the renewables side of the ledger, the Biden team is trying to speed up the adoption of green-energy resources and has proposed massive tax incentives and subsidies to that end. On June 6 the administration announced a workaround for a dumping investigation on imported solar panels, giving a two-year reprieve to imports from Southeast Asian suppliers. Many of these are partly owned and supplied by Chinese firms, including with the basic component of polysilicon from Xinjiang. The U.S. recently passed a law banning direct imports of polysilicon and other materials from the province due to the use of forced labor and other human-rights abuses. Coupled with the possible easing of Trump-era tariffs on Chinese products to combat inflation, such actions directly benefit China, a country that hasn’t condemned Mr. Putin’s war. The Middle Kingdom leads the world in making solar panels—and wind turbines. As First Solar, the only U.S. firm still competitive on a global scale in photovoltaic solar panels, commented, the reprieve on imports from Southeast Asia “directly undermines [U.S.] solar manufacturing by giving unfettered access to China’s state-subsidized solar companies for the next two years.”

The administration’s crackdown on mining projects also disadvantages the U.S. electric-vehicle industry. China, which controls much of the mineral production needed for lithium-ion batteries, is ramping up domestic production of these minerals while buying lithium and cobalt mines in Africa and South America.

As far as Mr. Biden’s aim to reinvigorate U.S. manufacturing, his energy policy undermines hundreds of thousands of good jobs in the fossil-fuel industry and does little to foster a renewable-energy industry at home. The administration’s program may help promote new jobs installing solar heating panels and in large-scale electric generation plants, but the underlying hardware is largely sourced outside the U.S. with raw materials mined and refined from foreign sources. Last month there were 54,700 jobs for solar installers in the U.S., with average wages of $23 an hour. At the same time, the oil- and gas-extraction industry employed 137,400 workers, who were paid an average of $45 an hour.

Many U.S. foreign-policy goals are compromised by the Biden energy policy. Domestic producers can help European and other allies limit dependence on Russian energy, while at the same time preserving U.S. energy independence. And encouraging domestic production of oil and gas would spare Washington from compromising with hostile leaders in Venezuela and Iran. Forgoing domestic production in favor of Saudi Arabia and other dictatorships also exacerbates the carbon-emission problem, as these producers are largely indifferent to production methods limiting methane and CO2 leaks. American producers have made cleaner production a priority. Devoting more land to ethanol production for blending with gasoline is also misguided amid shortages of grain for basic food needs.

A pragmatic understanding of the overall costs and benefits of the transition to a green economy at a time of war and economic challenges would lead to a more coherent policy. It is time for a revised energy plan.