Under a Renewed Sino-Vatican Agreement, the Chinese Catholic Church Will Wither 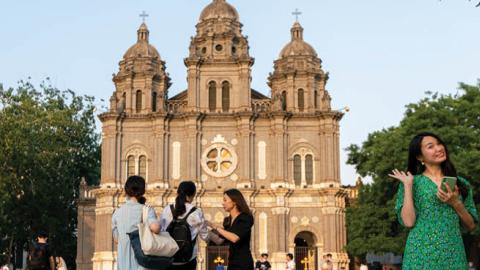 The Vatican is aiming to renew its secret provisional agreement with China as Chinese President Xi Jinping’s regime becomes more totalitarian and ruthless.

Since the Sino-Vatican deal was originally signed on Sept. 22, 2018, China has carried out genocidal atrocities against Uighur Muslims, breached its treaty with the United Kingdom on Hong Kong’s sovereignty, and deceived the world about the coronavirus. For Pope Francis, nothing should speak to Beijing’s bad faith and contempt for human dignity louder than the regime’s recent treatment of the Chinese Catholic Church itself.

Two years ago, Hong Kong Cardinal Joseph Zen stirred controversy by warning that the provisional agreement’s silence on the rights of its unregistered churches would allow China to “succeed in eliminating the underground church with the help of the Vatican.” If anything, his prediction underestimated the crisis. Both underground and official church branches, comprising 12 million faithful, are being quietly suffocated while the Vatican cheerfully partners with Beijing in horticultural and art shows.

From the start, Beijing exploited the secrecy surrounding the content of the agreement by falsely maintaining that the pope had agreed to require all priests to register with the CCP’s Catholic Patriotic Association. This meant they should take the pledge accepting “the principle of independence, autonomy, and self-administration of the Church,” Orwellian speech for rejecting the teaching authority of the Vatican in favor of that of the Communist Party.

In June 2019, the Vatican finally responded with pastoral guidelines, stating that it “respects the choice” of priests not to register with the association and suggesting that, if they do, they pledge, preferably in writing, to “remain faithful to the principles of Catholic doctrine.” But it was too late.

Underground clergy, including Heibei Bishops Augustine Cui Tai and Giulio Jia Zhiguo and some 20 priests, followers of the recently demoted Fujian Bishop Vincent Guo, were detained during the last two years after rejecting the pledge. One was Huang Jintong, tortured with four days of sleep deprivation. He eventually signed the registration while trying in vain to write his intent to follow Catholic doctrine. Seeing only the untenable choice of either pledging “independence” from the Vatican or defying the Vatican by remaining underground, other priests left their parish ministries and went home.

While the underground Church is dismantled, the registered churches are being energetically converted into propaganda and surveillance assets of the CCP’s United Front Work Department. Over the last two years, Beijing has imposed comprehensive measures to meld Chinese Catholicism with CCP orthodoxy under a policy of “Sinicization.” Vatican Secretary of State Cardinal Pietro Parolin conflated this process with “inculturation,” meaning adapting Christian practice to local art and culture. In May 2019, according to Catholic media, he made the specious claim, “These two terms, ‘inculturation’ and ‘Sinicization,’ refer to each other without confusion and without opposition.”

In the name of Sinicization, Chinese Catholic churches and homes are seeing pictures of Jesus and Mary replaced with those of Xi, while crosses and other Christian symbols are removed from church exteriors. When the centuryold cross was removed from a Henan Catholic church last Easter, Shanren Shenfu, a Catholic Patriotic Association priest, wryly remarked, “Now, when a cross is removed, Christians must be calm and smile,” alluding to Vatican self-censorship, a price for dialogue with China. Secretary of State Mike Pompeo decried China’s religious persecution, while the Vatican remains silent. When pressed, Archbishop Claudio Maria Celli, the Vatican’s longtime China negotiator, delicately described the repression as “situations that still require a journey.”

Chinese church homilies must now be based on Xi’s sayings. Moreover, on Feb. 1, Beijing imposed 41 articles of new religious restrictions for “implementing the values of socialism.” They require Catholic churches, among others, to “spread the principles and policies of the CCP,” ensure that religious personnel and believers “support the CCP leadership,” and establish “a learning system” in CCP policies. Enforcement is ensured by the government’s pervasive high-tech surveillance, including video cameras inside churches.

Since 2018, China has restricted internet access to Bibles and, under CCP supervision, is undertaking a new Bible translation, implying politicization, Hong Kong Christian scholars say. The Book of Revelation is predicted to be altered or dropped by the editors.

Matthew’s passage of Jesus directing, “Let the children come to me,” could also be left on the cutting room floor. China’s 2018 religious regulations prohibit churches from admitting and instructing minors. The consequences for religious vocations could be dire. Without new, faithful priests, the Chinese Catholic Church, having quadrupled over the past 40 years, could wither away in a generation.

Anonymous senior Vatican sources explained that the 2018 agreement would ensure the appointment of bishops in a unified Church by giving Beijing a say in their nominations. Yet only six new bishops have been installed while scores of episcopal posts languish, including, notably, that of the Hong Kong diocese. Hong Kong’s indispensable role in serving as an information and education outpost for the Chinese Church is now compromised by China’s oppressive National Security Law, imposed last May.

At a Sept. 15 press conference, Parolin admitted the results of the 2018 deal “have not been particularly striking.” Despite this and the overall intensifying persecution, both he and Celli urged Pope Francis to renew it. After decades of negotiating with China, maybe they believe the media hype that it was a “historic” diplomatic achievement. In fact, the agreement can only be seen as papal acquiescence in the CCP’s dilution, distortion, and forced decline of Chinese Catholicism.