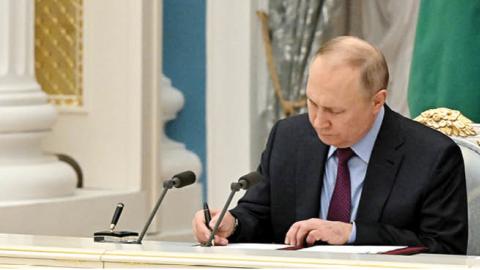 Vladimir Putin’s renewed invasion of Ukraine has intensified scrutiny of wealthy Russians living in London, New York and Paris, enjoying all the creature comforts of the West while their deranged leader charges headlong into violent confrontation with the free world.

Unsurprisingly, calls are growing for the US and its European allies to impose tougher sanctions on these oligarchs who have propped up Putin’s regime without having to suffer under it. Doing so is long overdue and will chip away at the foundations of Putin’s kleptocratic regime — though the results may come too late to help Ukraine.

Putin’s rise to power was defined by corruption. As the frontman for ruthless oligarchs who competed for power in post-communist Russia, his job was to let them steal as much as they wanted — as long as they stayed out of politics. The legacy of this sprawling kleptocratic scheme today is one of the most unequal societies on Earth.

With combined assets of $640 billion in 2020, Russia’s richest 500 individuals — who represent less than 0.001% of the population — control more wealth than that held by 99.8% of the adult population.

And what do they do with all that money? Invest in new businesses and create jobs? Of course not. More than half of the wealth controlled by Russia’s richest people has been spirited away into tax havens and Western financial centers.

Russian oligarchs are too frightened to keep their wealth within Russia, for the simple reason that it could be stolen by Putin’s regime or another crook at any time. Those close to Putin, known as his “wallets,” also put their money to work in his service by corrupting Western politicians, buying sports teams, and other schemes to expand Russia’s influence.

But hiding funds overseas also makes them vulnerable to being frozen or seized by US law enforcement. America has a unique ability to pursue its adversaries in this way because of the US dollar’s status as a global currency, which effectively extends its jurisdiction over financial crimes worldwide. By targeting the stolen wealth that props up Putin’s regime, the US should be able to use it as leverage over the strongman and deter him from malign behavior like invading Ukraine.

There are two problems, though: The Biden administration seems unwilling to do so, and even if they were, the expatriate oligarchs aren’t necessarily the ones calling the shots in the Kremlin anymore.

That’s because Putin has craftily succeeded in taming the oligarchs, surrounding himself instead with sycophantic security bosses who share his hardline vision for making Russia great again. And encouraged by the Obama administration’s anemic response to the first Russian invasion of Ukraine in 2014, Putin has kept the Russian economy on a war footing ever since by amassing hundreds of billions of dollars in foreign reserves and deepening trade and investment ties with China.

Putin has succeeded in insulating himself from the worst effects of Western sanctions, whether they happen to be leveled against his cronies or the broader Russian economy. This makes it harder to land a punch on Putin, and to do so we will need to hit him harder and faster.

Sadly for Ukraine, the Biden administration has instead played into Putin’s hands by pursuing endless diplomacy instead of engaging in serious deterrence.

The sanctions announced by President Biden in response to Russia’s recognition and invasion of the Donetsk and Luhansk regions are indeed stronger than those issued by Obama in 2014, but the bar was pretty low. Months after Putin began building up his forces, the US hit two banks that were already under sectoral sanctions, added further restrictions to Russian sovereign debt, targeted a handful of oligarchs, and halted the already-halted Nord Stream 2 pipeline. This is not the crippling of Russia’s economy that such a moment calls for.

That would include powerful sanctions to isolate Russia’s financial system and most lucrative trade sectors from the global economy. And it means hounding Russia’s oligarchs and business elite with targeted sanctions and law enforcement actions until they hit breaking point. Only then might they consider mounting a challenge to Putin’s seemingly unassailable rule.

Of course, we cannot ignore our role in all this. Russian elites might be the ones doing the stealing, but they rely on Western lawyers and bankers to launder dirty money for them. That’s why ongoing efforts to ban shell companies and strengthen anti-money laundering regulations are so important.

We should also bear in mind that China is watching carefully. Invading Taiwan might seem less appealing if Xi Jinping believes that the US will start hunting down his supporter’s private overseas wealth in addition to any measures impacting the broader Chinese economy and population. Like Putin, Xi couldn’t care less about the lives of his own citizens. But he does worry about preventing palace coups.

The Biden administration and its European allies missed the window for effective sanctions deterrence while Putin was still building up his forces, and we cannot be certain that even tough measures taken now will stop tanks rolling further into Ukraine. But in the longer term, making life as hard as possible for Russia’s most powerful people outside the Kremlin could eventually cause them to question whether putting up with Putin is worth the hassle.

It also demonstrates to Putin, Xi, and others that the US has gotten wise to how authoritarian leaders rely on corruption to sustain their regimes — and will not hesitate to bring the hammer down when our democratic friends are threatened.