What Janet Yellen Gets Right About the World Economic Order 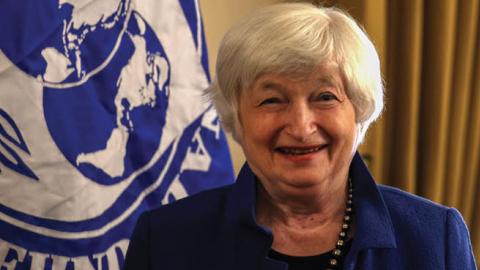 Caption
Treasury Secretary Janet Yellen smiles during a photo op at the U.S. Department of the Treasury on July 01, 2021 in Washington, DC. (Photo by Anna Moneymaker/Getty Images)

The Ukraine war “has redrawn the contours of the world economic outlook,” Treasury Secretary Janet Yellen said in an April 13 speech. She invoked the precedent of the Bretton Woods meeting in 1944, which designed the current economic system following World War II.

The Biden administration tends to place undue faith in multilateral solutions to global problems, but Ms. Yellen offered one clear and pathbreaking idea that officials should seriously consider: a new trade architecture “on terms that work better for American workers.” Calling out especially China for its support of Russia, she asserted that the new system should be organized by “countries we know we can count on.”

Given China’s failure to abide by the trade rules it agreed to when it joined the World Trade Organization in 2001, combined with China’s support of Russian aggression and Xi Jinping’s determination to establish economic independence and global dominance, trade reform ought to work toward a new system that excludes China. What should this new architecture look like, and can the WTO help shape the new order?

The unfortunate reality is that the WTO remains paralyzed by longstanding differences. For four years, the U.S., European Union and Japan have tried to craft better subsidy rules to discipline Chinese practices, but Beijing and other state-dominated economies can easily block any substantive improvement, as major changes in most areas require full consensus.

Additionally, the pandemic reinforced demands by countries such as India and South Africa to weaken intellectual-property protections, which the Biden administration appears to support in some formulation. India is at best a selective supporter of WTO rules, tolerating mostly those that allow it economic autonomy and protectionist levels of tariffs.

The Ukraine war has enhanced North-South differences in intergovernmental organizations. Brazil, India, Indonesia, Mexico, Vietnam and many African nations abstained from a United Nations General Assembly vote to suspend Russia from the Human Rights Council, fearing backlash from Russia and China for siding with the West.

As Ms. Yellen suggests, the best way forward on a new trade architecture starts with “plurilateral trade agreements” among American allies. A first step would be for the U.S. to rejoin what started out as the Trans-Pacific Partnership. That agreement was shaped by the Obama administration and includes good rules on subsidies and digital trade, the latter an area Ms. Yellen specifically mentioned. Bipartisan opposition in the 2016 presidential race doomed U.S. membership in the TPP. The 11 members of the successor agreement include U.S. allies Japan, Australia, Canada and emerging economic powers in southeast Asia such as Vietnam and Malaysia, which are at risk of being subsumed into a Chinese-led economic order. With some work on rules to prohibit imports of products made with parts largely sourced in China, the U.S. ought to rejoin this partnership and help recruit other countries, especially Indonesia and technology powerhouses South Korea and Taiwan.

Another early goal of a reworked trade framework ought to be a free-trade agreement with the U.K. A more ambitious variation might be such an agreement between the “five eyes” group—the U.S., U.K., Australia, Canada and New Zealand—or even working to include these traditional allies in the U.S.-Mexico-Canada Agreement. Such an initiative would create a zone for what Ms. Yellen calls “friend-shoring.” As the U.S. tries to establish more resilient supply chains, the mineral resources of Canada and Australia and specialized technologies of the U.K. could be crucial. These resources would allow the U.S. to avoid relying solely on subsidized domestic production of rare-earth metals, green technologies or semiconductors.

An aspirational goal for the U.S. should be a free-trade agreement with the EU. But until the EU decides that it needs to choose firmly between the U.S. and China and rethink its ambitions to become an independent technology and regulatory superpower, any such trans-Atlantic agreement is out of the question.

World economic leaders gathering this week for the International Monetary Fund and World Bank annual meetings in Washington should focus on the opportunity presented by widespread condemnation of the Russia-China entente and begin considering a revised trade order. Some of Ms. Yellen’s other ideas, especially funding increases and governance modernization for the IMF and World Bank, risk increasing Chinese influence. Governance reform implies—and China will insist on this—making China’s voting rights commensurate with its proportion of the global economy. The experience of Chinese influence at the World Health Organization ought to counsel against this. America’s interests, and those of its democratic allies, would be better served by a new economic order without Chinese participation.