Why Should U.S. Taxpayers Fund a Pushback Against Russia in Europe? 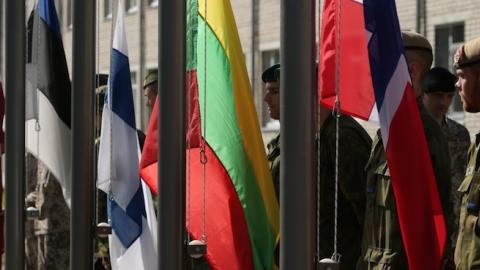 Members of the Subcommittee on State, Foreign Operations, and Related Programs believe—on a bipartisan basis--that it would be a good investment “to put some money aside to help emerging democracies […] to withstand assault on their democracies by Russia,” as stated by the chairman, Senator Lindsey Graham (R-SC). This is an encouraging takeaway from the Subcommittee’s hearing on “Russian Policies and Intentions Toward Specific European Countries,” held on March 7, 2017.

So what lies behind the thinking of these Senators, the whole principle of providing aid to allies in light of Trump’s “America First” policy, and the absolutely legitimate question of everyone paying their “fair share”?

First of all, Lithuania, Latvia, Estonia, and Poland as members of NATO, as well as partners Ukraine and Georgia, are reliable allies of the United States. They share not only the same values, but the same goals, including fighting terrorism. Soldiers of these countries stood as brothers-in-arms with American troops in Iraq and Afghanistan, and are now ready to join the war against ISIS.

On the other hand, Russia is “coming after [the U.S.], France, and Germany--until somebody stops them,” as Senator Graham summarized it. Bearing that in mind, the best counterstrategy is to fight back in Europe, not wait until the Kremlin attacks the U.S.--as the recent presidential election interference proved it is prepared to do.

Learning lessons from that dramatic experience was the persistent leitmotif of the hearings. Senators from both parties put the same question to the Ukrainian foreign minister, Pavel Klimkin, and ambassadors from the aforementioned countries: In view of their own experiences, what would be the consequences of not punishing Russia for its interference in the U.S. elections?

The bluntest answer came from Georgian ambassador David Bakradze, who reminded the hearing that an insufficient response to Russian aggression against his country only led to further aggression in Ukraine. The other participants agreed that to forgive and forget would only encourage the Kremlin towards further hostile steps.

The first-hand experience of these U.S. allies is hard to overestimate, as all of them have endured a hybrid and information war waged against them by Russia for 25 years. Even the Kremlin’s cyber warfare, which is thought to be a new phenomenon, was tested full-scale against Estonia back in 2007.

This is important because it shows how mutual assistance between the U.S., the Baltic countries and Poland can really become a two-way street. While relying on U.S. military support and the presence of American troops, these allies want to share their experience of Russia’s hybrid warfare—including how to fight back and build resilience within American society. “Fake news,” a sophisticated form of subversion by Russian-financed TV channels, hostile activity by Russian-connected NGOs, online trolls, the weaponizing of social media – whichever example you take, nothing is new to U.S. allies in Russia’s neighborhood.

Kleptocratic threats to Western democracies are a powerful weapon in the Kremlin’s arsenal, but were hardly mentioned during the hearings. Only the Estonian ambassador, Eerik Marmei, referred to Russia’s “economic leverage through murky business connections” during his remarks.

However, all of these countries have been challenged by Russia’s kleptocracy, and have learned the hard way how to insulate themselves against exported corruption. Even the Kremlin’s foreign policy advisor, Sergey Karaganov, cynically describes Russian foreign policy as one that buys the elite of neighboring countries “with money that was then stolen, likely together.”

Back in 2004, the Lithuanian president Rolandas Paksas became the first European leader to be removed from office by impeachment. Accusations of murky ties to the Russian mafia were the subject of widespread discussion and concern both in Lithuania and abroad, based on intercepted phone calls, his acceptance of Russian money and help during his re-election campaign, and allowing Russia’s secret services to penetrate the presidential offices.

"Paksas' case stands as an important example of what Russia and its kleptocracy is up to()":"http://kleptocracyinitiative.org/2017/01/kleptocracy-russias-most-succe…. It demonstrates how, before almost anyone in the West could have imagined it, Russia was already covertly participating in the elections of a European country. It also proves that, in Putin’s Russia, it is hard to find any distinction between the state, security services, mafia, and business.

Lithuania, Latvia, Estonia, Poland, Ukraine and Georgia’s eagerness to share their wealth of experience and push back together as allies makes them invaluable U.S. partners. The second major takeaway from the hearing was that, first and foremost, we need to develop a shared understanding that Russia poses a threat to all the Western world--including the U.S.—and that our response must be united as well. Fortunately, there is no need to reinvent the wheel here. Dealing with the problem collectively is undoubtedly the most cost-effective and results-oriented approach--as the history of the transatlantic alliance proves.