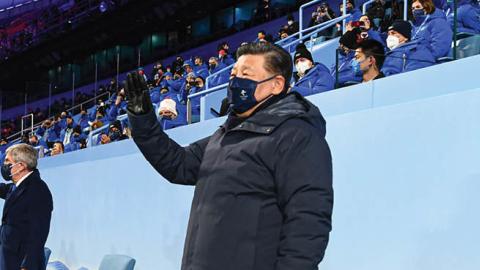 An initially skeptical global audience celebrated when the rescheduled Tokyo Summer Olympics was conducted successfully in July and August last year. Those Games were a brave testament to the possibility of living with Covid-19 at a time when much of the world was suffering from cabin fever in trying to keep the spread of the virus at bay.

More than the feats of athleticism on display, the Tokyo Games were one of the first opportunities for the world to reconnect in a manner taken for granted before the pandemic. This was possible because the Summer Games were held in Japan, a country that has emerged as the champion of a free society and liberal democracy in a region with many pretend democracies and autocratic states. The Tokyo Olympics was a triumph for openness and fraternity, and in the process, a tribute to the host country.

For democracies, the Olympics gives the world a greater and more accurate insight and exposure to that country and its people — and to each other. Beijing is only about 1,300 miles away from Tokyo. But it is political systems rather than geography that matter. As the Winter Olympics begins, it is hard to ignore that the Chinese Communist Party is using the privilege of hosting the Games to advance a very different agenda and set of values.

Global sporting events can never be separated from politics no matter how much we wish it differently. For autocracies, it is a unique opportunity to manipulate and control the way outsiders see their country, society, and institutions. Think Berlin in 1936, Moscow in 1980, Beijing in 2008, and Sochi in 2014.

Back in 2008, there was controversy even before the Games began when protesters greeted the torch relay in multiple cities from Athens to Beijing. Those protesters objected for similar reasons that they do today — reasons that led the United States and a handful of other countries to impose a diplomatic boycott of the 2022 Beijing Games. These reasons include the violent suppression of protesters in Hong Kong and human-rights abuses in Xinjiang and Tibet.

However, much has changed in 14 years in scale and substance and our perspective of these. Serious oppression has turned into genuine genocide in the form of grotesque concentration camps in Xinjiang. The rapid crackdown in Hong Kong in contravention of the binding Sino-British Joint Declaration, in which China promised to preserve Hong Kong’s existing institutions for 50 years, is a troubling indication of what CCP rule over populations will mean for polities such as Taiwan.

Circumstantial evidence is increasing to support allegations of systematic organ-harvesting of people in detention including Falun Gong practitioners, Uyghurs, Tibetans, Muslims, and Christians. These are allegations that United Nations independent experts take seriously and whose investigations are being hampered by CCP officials’ refusal to grant sufficient access to investigate these matters. The emergence of technologies such as artificial intelligence, face-recognition software, and individual and big-data capture is allowing the CCP to create a high-tech version of a surveillance state once imagined in science-fiction novels.

Externally, China is becoming increasingly aggressive toward neighbors such as Japan, Taiwan, India, the Philippines, Vietnam, Malaysia, and Indonesia over land or maritime disagreements, even though most of Beijing’s claims have been found to be illegal and illegitimate. Over the past decade, Beijing has perpetrated at least 150 instances of economic coercion against countries and firms, with more than half of these occurring over the past two years. Australia and Lithuania are the two most recent victims.

In 2008, much of the world was still hopeful that China was heading in a more open, cooperative, and peaceful direction, even if the CCP was as determined as ever to maintain its iron grip on power. That meant most gave China the benefit of the doubt leading up to the Beijing Summer Games and celebrated its impressive hosting of the Olympics as evidence that an impressive and modern global power had emerged.

In 2022, that optimism is all but extinguished, especially under current leader Xi Jinping, who is relentlessly scheming to extend his rule for another decade when the 20th National Party Congress meets later in the year. An impeccably run Winter Games will showcase the country’s impressive organizational and technological capabilities, while the event will be supported by compliant domestic spectators and a cowed media. Dictators around the world will take inspiration from the display over the next few weeks.

For others, a successful Beijing Games will heighten the realization that an increasingly competent and efficient authoritarian China ought to be feared and scorned rather than praised and admired.

Also on show will be the CCP’s paranoia, which fuels its rage against other countries unwilling to bend the knee and which underpins Beijing’s oppression of its own people. Beijing will use the cover of Covid-19 safety to prevent the free movement of athletes and journalists to ensure that the latter see only what the CCP wants them to see. This is itself perverse, as it was the recklessness, if not malice, of the party that unleashed the virus into the world.

Even in the midst of a pandemic, restricting movement (and speech) won’t work. Beijing has been increasingly disappearing its own citizens and kicking out foreign journalists over the past few years. The CCP can do much to control information and the expression of ideas but not what others might be thinking and feeling in response. The restrictions it imposes on its citizens and foreigners to go where they please and say what they think might well ensure a superficially trouble-free Games. But it is difficult to win over the hearts and minds of countries and individuals when the main approach to ensuring compliance is threats or coercion issued against athletes who might choose to defy and criticize the regime.

For populations who cherish freedom and openness, more disturbing than an incompetent authoritarian regime is a ruthlessly competent one. In one sense, the CCP is certainly the latter. It has allocated enormous resources to hosting the Games. Despite promoting the event as “clean and green,” organizers removed 20,000 trees from the Songshan National Nature Reserve in Yanqing just to host the alpine-skiing events, and this will be the first Winter Olympics to rely entirely on man-made snow.

This is an appropriate metaphor to explain why Beijing 2022 will fail China even if the event is wildly successful. Hosting a successful global event will not earn it the affection, respect, and legitimacy it craves. The CCP’s claim that the event will be an apolitical gathering to strengthen the bonds between some 3,000 athletes and 90 nations will be as artificial as the snow the skiers will be competing on.