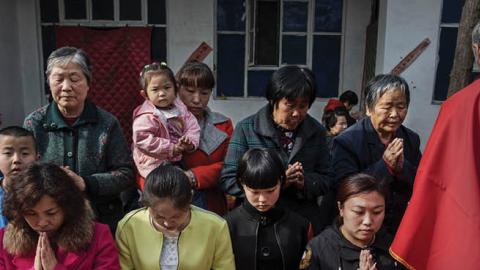 Caption
Chinese Catholic worshippers wait to take communion at the Palm Sunday Mass during the Easter Holy Week at an "underground" or "unofficial" church on April 9, 2017 near Shijiazhuang, Hebei Province, China (Photo by Kevin Frayer/Getty Images)

Today, prominent Christian lay persons from around the world are launching a campaign for the explicit purpose of fostering international communal prayer focusing on China between May 23–30. This initiative was sparked after a call for prayer for the “Church and Peoples of China” was issued by Burma’s Cardinal Charles Bo, as president of the Federation of Catholic Asian Bishops Conferences.

The Cardinal is the highest-ranking Catholic Church official to dedicate a specific period of prayer for China’s Church since Pope Benedict XVI did so in 2007, though Pope Francis spoke generally of the duty to pray for China’s Christians, in 2018. The prayer campaign is at this stage being carried forward by the laity.

American Congressman Chris Smith, the U.K.’s Lord David Alton, Canadian parliamentarian Garnett Genuis, Australian parliamentarian Kevin Andrews, Irish entrepreneur Declan Ganley, Canada’s former religious-freedom envoy Andrew Bennett, CSW’s expert Ben Rogers, Ave Maria law professor Jane Adolphe, as well as myself, are part of the informal coalition supporting the campaign. What resonates with us is Cardinal Bo’s explanation that prayer is needed as China rises in power that it may “become a force for good and a protector of the rights of the most vulnerable and marginalized in the world.” He writes that his underlying concern is the “inviolable dignity of the human person.”

China’s human-rights situation is indeed desperately in need of prayer. Defense lawyers, citizen journalists, and dissidents are arrested, jailed, or disappeared. Religious believers constitute the largest group of those most aggrieved.

In recent months, mass atrocities against the Uyghur Muslims have been recognized as ethno-religious genocide by the United States. Over a million Uighurs have been detained in concentration camps and/or subjected to torture, sexual violence, forced sterilizations and abortions, slave labor, and other atrocities. Decades-long repression against Tibet’s large Buddhist population is intensifying. Credible reports continue to surface of forced organ harvesting, particularly victimizing members of the Falun Gong spiritual group. These are some of the “peoples” referred to in the Cardinal’s call for prayer.

Across China, both government-registered or “Patriotic” churches and underground churches are severely repressed and may be existentially threatened. Since 2018, the Chinese Communist Party regime has ratcheted up measures to stop the spread of the faith and distort Christian teachings. Undoubtedly to protect its Western trade, China reins in the Church mostly through onerous regulations and not the graphic coercion seen against the other religious minorities. It is employing four major strategies to do this.

First, it systematically bans youth from going to church, attending Bible studies, and being exposed to religion in any way. This will be devastating for the future of China’s Church. Its vaunted growth over the last 50 years, now estimated at 60–100 million Christians, will predictably reverse as a result.

Second, it is energetically dismantling the vast Christian underground, which accounts for most Protestants and half of the Catholics. Operating openly for decades though unregistered, these churches are now being crushed. Among the thousands shut down are five Catholic parishes in Fujian, and the internationally renowned Protestant Early Rain Covenant Church in Chengdu, and the Guangzhou church founded in the 1970s by the late Pastor Samuel Lamb.

Their leadership is being arrested and put on trial or, more frequently, simply made to disappear into secret detention centers. Some are subject to brainwashing sessions and torture or forced to quit their ministries.

Under the new rules, the state’s social-credit-score system applies to all Christian leaders. Former Mindong Bishop Guo lost running water, heat, and electricity as punishment for refusing to register. Zion Church Pastor Ezra Jin Mingri, who shut his Beijing church rather than allow state surveillance in it, has been barred from flights out of China for three years. So has his daughter, who planned to attend an American law school.

Third, on May 1, new rules were applied to ensure Christian “Sinicization,” President Xi Jinping’s term for aligning the Patriotic churches with CCP. The CCP has total oversight over their religious leadership, doctrine, appearance, and sermons — as starkly symbolized inside some churches with Xi and Mao’s images replacing those of Jesus and Mary.

As I previously reported in these pages, the new rules on selecting China’s bishops make no mention of any papal role in the process, despite the 2018 Sino-Vatican agreement. Over these past two years, Beijing has permitted only three new episcopal appointments for some 40 vacant diocesan seats, accounting for 30 percent of the Patriotic dioceses.

Finally, the CCP is restricting Bibles. The Bible is now difficult to buy in book stores and has been recently dropped from the App store and censored from the Chinese Internet. Ironically, while the Holy Book becomes scarce in China, China’s Amity Printing Press continues to be relied on by American Bible publishers for the vast majority of the millions of Bibles sold annually at home.

China is at war with all religions. The global Church’s silence about this is coming to an end. The campaign now underway will facilitate a prayer effort for all those persecuted, by those with the freedom to gather in prayer.

To find out more, see www.GlobalPrayerforChina.org