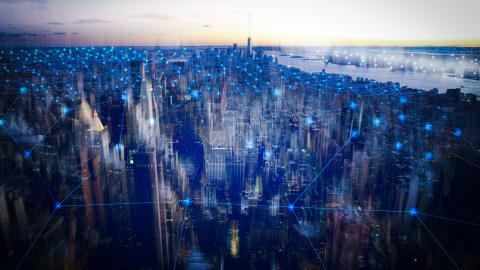 Quantum computers mark a transformational revolution in information technology. Whereas most computers process data using bits that consist of either a zero or one, quantum computers can use those digits simultaneously through superposition.1

The many resulting benefits will include the discovery of new drugs, new processes for carbon capture and advanced battery research, and a new exactitude in weather prediction, including in dealing with climate change.2 All in all, experts expect the global quantum computing industry to grow to $450–850 billion in value in the next 15 to 30 years.3

Yet because of the challenges of engineering qubits—the physical basis of quantum computing—most authorities push the timeline for full-scale quantum computer commercialization beyond 2040 and as far as 2050. Even some quantum experts do not expect any big breakthroughs until the 2030s at the earliest.

The true path to the quantum future is the combination of quantum and classical digital technology, especially in computing, which will powerfully accelerate access to the potential benefits of quantum information science.

While key players in the industry, including IBM and Microsoft, have recognized the potential synergy of hybrid architectures and applications, the federal government needs to expand its attention and resources devoted to this aspect of securing America’s quantum future and its leadership in the twenty-first century.