Can the US Halt China’s Quantum Quest? 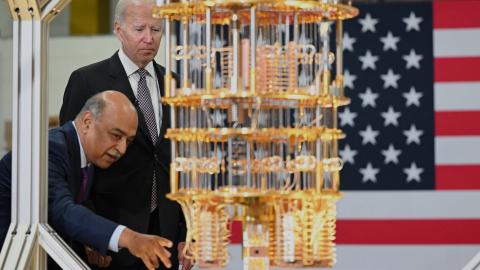 Caption
US President Joe Biden looks at a quantum computer with IBM CEO Arvind Krishna as he tours the IBM facility in Poughkeepsie, New York, on October 6, 2022. (Mandel Ngan/AFP via Getty Images)

The United States may be poised to open a new front in its effort to block China’s access to our high-tech base, namely quantum computing.

My last column described how the Biden administration this month cut off Chinese access to advanced semiconductors coming from the US, and to US researchers working on microchips in China. It’s all part of a strategy of slowing China’s advances in the high-tech sector that only benefit its military and intelligence services, and hurt American economic competitiveness as well as national security.

Now, according to a recent report from Bloomberg, officials are discussing cutting China off from other made-in-USA technologies that feed its appetite for global hegemony at our expense. At the top of the list, it seems, are artificial intelligence software and quantum computing.

It’s not surprising that AI would be a tempting target. The United States has been the leader in AI since its founding in the 1950’s. American companies have been feeding China’s appetite and access to this ground-breaking technology for decades—that is, until Americans discovered that the growing sophistication of machine learning protocols were helping China build a total surveillance state that kept its citizens in thrall and gave the Chinese military increasing advantage on the battlefield, and Chinese intelligence services a similar advantage in espionage.

Quantum computing poses a different set of problems. It’s no secret the US and particularly US companies like IBM, Microsoft, Intel, and Google have been world-beaters in the development of these machines that will eventually be able to out-perform even the fastest supercomputers. They will not only provide key answers to otherwise insoluble problems in math and science, and create pathways to the creation of new miracle drugs and advanced materials.

As we’ve pointed out many times in this column, they will also pose a major national security challenge because of their advanced code-breaking/decrypting capabilities.

While it’s still the case that the US leads in quantum computing, and has spawned new innovative ways to develop quantum computers such as ion-trap technology, it’s also true China has invested heavily—more than $12 billion— in closing the gap. Their last major feat, which IBM only recently topped, was a 113-qubit computer that was supposedly ten million times faster than Google’s best effort in 2019

Forbes BusinessA recent RAND Corporation report concluded that “China has high research output in every application domain of quantum technology.” At the same time, a lot of that Chinese effort has relied on cooperation with foreign quantum researchers and scientists, including Chinese students studying at American and Western universities. One of the targets of the recent wave of Biden restrictions on technology transfer has been third parties who are knowingly or unknowingly helping Chinese develop the technologies it intends to use against us: for example, South Korean or Taiwanese semiconductor companies who pass along made in USA chip technology to customers in China.

While no one has proven that the “crown jewels” of China’s quantum computing industry were actually stolen from the US or from our allies working in the same field, there is no doubt that as the quantum computer industry sectors grows (which Boston Consulting Group predicts will be a $450 billion to $850 billion industry in the next 15-30 years), China will find ways to leech onto developments by major quantum powers like the US, Canada, and European allies like Britain and the Netherlands. A report issued just last year detailed how the Delft University of Technology, a major hub of quantum research, has been unwittingly helping the Chinese military, demonstrates the scope of the problem-and not just in quantum science.

Critics to the Biden strategy will object that unlike semiconductors, quantum is still an emerging technology, and a heavy-handed approach to a quantum embargo will do more damage than good by hampering vital scientific research—even setting back American companies’ opportunities to cooperate with allies we can trust, out of fear the Chinese will somehow get into the act. I would agree, and further argue that the best way to beat the Chinese in the quantum race is to secure our leadership in quantum computing and post quantum cryptography through funding and innovation, as well as to increase our efforts in areas like quantum sensing and quantum communications where China has established a lead—including quantum in space.

But a carefully crafted sanctions regime that targets critical technologies within the quantum sector, such as quantum computing chips and quantum sensing technology that can be used by the Chinese military, can ultimately do more good than harm for the US industry as a whole. The key will be who advises the administration on this next step. Those at the table should not be just the big companies like IBM and Microsoft but also the innovative mid-sized and even small-sized players who will lead the next generation of a truly vibrant quantum industry.

We in the Trump administration pioneered this embargo approach to take away China’s unfair advantage in the high-tech race, with Huawei and 5G. It’s gratifying to see the Biden administration following in our footsteps. The real issue now is not whether we need to expand the pushback to the quantum sector, but how.

That’s a question government bureaucrats shouldn’t take on by themselves. Look to industry to supply the answers, and to be the partner in keeping China from ruling the quantum future.