What to Make of North Korea’s Latest Missile Barrage

Taking advantage of US weakness, Pyongyang is growing bolder, and strengthening alliances with Russia and China. 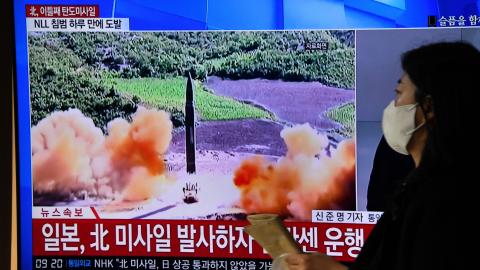 Caption
A woman walks past a television screen showing a news broadcast with file footage of a North Korean missile test in Seoul, South Korea, on November 3, 2022. (Jung Yeon-je/AFP via Getty Images)

This morning, North Korea went on yet another missile-testing spree. Pyongyang tested 23 missiles of varying kinds, breaking its previous record for missiles launched in a single day.

The Kim regime’s endgame is straightforward: It wants to improve its nuclear-missile program, and, if possible, get something from the Biden administration along the way. That “something” could be sanctions relief or a US policy change that essentially accepts Pyongyang as a legitimate nuclear power.

There is, unfortunately, good reason to believe this approach might work. The missile-testing spree, which has taken place on the Biden administration’s watch, has elicited nary a slap from Team Biden. That means the tests have already been a boon for North Korea. With each test, the problem for US allies, and for the United States, becomes more acute. And each North Korean missile test gives Pyongyang more information about how to adapt and improve its missile-launch system, to make those systems more reliable, to convince the operators of their effectiveness — and, perhaps most important, to convince North Korea’s adversaries of their effectiveness.

As North Korea shows greater technical capability in this area, we should expect it to grow even more confident and possibly more aggressive, and we should expect the South Korean government to become less confident and increasingly uncomfortable. Improved North Korean missile capacity gives Pyongyang greater coercive power over the US and our allies, even if it never attacks US or allied troops deployed in South Korea. Public polling shows that South Koreans have growing doubts about the US commitment to their security, which means they are becoming more interested in getting their own nuclear-weapons capability.

South Korea responded to North Korea’s latest round of missile tests with tests of its own, also fired into international waters. South Korean president Yoon Suk-yeol ordered his nation’s military to ensure that North Korea “pays a clear price for its provocation.” If the US does not improve South Koreans’ confidence in our commitment to extended nuclear deterrence, the temptation for them to pursue their own capability will become harder to resist. Should South Korea go in this direction, it could invite a nuclear-proliferation cascade.

South Korea isn’t the only ally enduring North Korea’s dangerous missile launches. A few weeks ago, North Korea, without providing a warning, tested an intermediate-range missile over US ally Japan. Flying over a nation’s sovereign territory is not merely threatening; it is dangerous and provocative. No nation in Japan’s position should be expected to remain tolerant and restrained indefinitely. South Korea and Japan would be entirely justified in growing impatient and frustrated with US impotence in the face of North Korea’s return to such activity, which had been dormant since the Trump administration’s threats of “fire and fury” in 2017.

Team Biden may have competent national-security personnel, and senior military advisers capable of providing sound military advice. But the Biden administration is ultimately only as strong as the president himself. And Biden is the weakest link. The evidence abounds: His lack of leadership during the precipitous Afghanistan withdrawal. His unwillingness to punish Russia for its aggression leading up to Putin’s decision to invade Ukraine. His famous risk aversion over the course of Russia’s war of aggression against Ukraine. His desperate commitment to an Iran deal as that regime brutally cracks down on its people. All this leads one to conclude that President Biden lacks the energy, mental acuity, attention, and wherewithal to stand up to Kim Jong-un.

Not only is North Korea receiving little pushback for its actions. It is also receiving diplomatic and economic backing from America’s enemies, China and Russia.

China has continually kept the pariah state afloat through economic support, and runs interference for Pyongyang when the United Nations does try to issue statements or increase sanctions for North Korea’s repeated violations. Now, as Xi Jinping cements his stature as the first term-unlimited leader of the CCP since Mao, he seems to have given Kim a longer leash to behave even more brazenly against US allies. Proclamations of US powerlessness against Kim are consistent with Xi’s larger message that the United States is in decline and cannot provide the protection it promises, so China should replace it as the preeminent power.

Russia, too, is in Pyongyang’s corner. Or rather, Pyongyang is in Putin’s corner. This benefits North Korea, too. Today, the Biden White House confirmed that North Korea is supplying Russia with weapons to continue its war of aggression against US-backed Ukraine. US threats of turning Russia into a true pariah state ring hollow when Putin clearly appears indifferent to the charge even now.

With Chinese and Russian backers, and little resistance from the United States, North Korea will grow more powerful. There will almost certainly be more North Korean missile tests, possibly a seventh nuclear test. Our allies and deployed troops will be at greater risk in an increasingly volatile and tenuous region. This is the price of poor US leadership.