Biden's Budget Doesn't 'Get' Importance of the Coast Guard 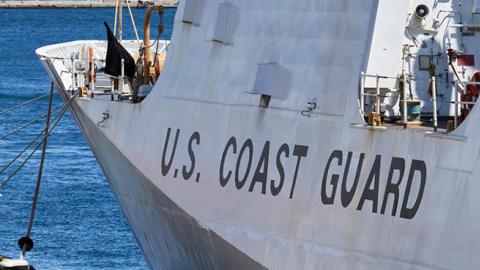 Caption
The US Legend-class national security Coast Guard Cutter Hamilton is seen in the port of Odessa on the Black Sea after conducting joint exercises according to NATO standards with the Ukrainian Navy ship Starobelsk on May 11, 2021 in Odessa, Ukraine (Photo

President Biden’s FY2022 budget proposal has implications for every aspect of national power. But one of its most wrongheaded aspects — the Coast Guard budget proposal — is virtually unmentioned outside of wonkish policy circles.

The Coast Guard is the least appreciated tool of national power. The U.S. faces a range of external security challenges, from a rising China, a resurgent Russia and an assertive Iran, to international terrorism and organized crime. But the linkage between these issues remains obscure, even among those ostensibly charged with national defense. China, Russia and Iran all pose strategic challenges, with the former constituting the greatest military threat to American interests and allies. However, all three actors use below-conflict-threshold means to achieve their objectives and shape future conflicts, an approach known as “gray zone” or hybrid warfare.

Organized criminal groups, particularly Latin American drug cartels, move illegal drugs into the U.S. by air, land and sea, and support domestic gangs to expand their power here. But they also work with terrorist organizations, most notably Iran-backed Hezbollah; they scrub terrorist “dirty cash” and take a cut of the profits from terrorist-produced illegal substances. In return, groups like Hezbollah gain greater international access, allowing them to conduct operations or gather intelligence abroad.

The Coast Guard is a unique hybrid service. During wartime it is a uniformed service subordinated to the Navy. Coast Guardsman played a critical role during World War II, from supporting the Navy’s anti-submarine warfare and conducting search-and-rescue operations in every theatre, to manning the landing craft that carried soldiers and marines to enemy beaches. In Vietnam, Coast Guard patrol craft and oceangoing cutters patrolled the Vietnamese coastline, interdicting Viet Cong and North Vietnamese supplies.

During peacetime the Coast Guard is an essential law enforcement agency; it and the Drug Enforcement Agency (DEA) are the most effective counter-narcotics and counter-drug agencies in the U.S. government. In 2019, for example, the Coast Guard’s interdiction of $6.14 billion worth of cocaine was central to all counter-drug efforts.

Gray zone activities pose a unique challenge to the U.S. and its allies. China’s coast guard outmatches any regional equivalent. Apart from Japan and — to a lesser extent — Taiwan, every Chinese regional target is forced to use its navy to respond to Chinese gray zone incursions. But using “grey hull” warships against “white hull” coast guard cutters invites Chinese escalation. China has attempted to generate these scenarios in the past, most notably in its 2014 oil rig standoff with Vietnam and its ongoing 220-fishing-vessel incursion into Philippine waters. The U.S. cannot dispatch a Surface Action Group of destroyers, let alone a Carrier Strike Group, to respond to such Chinese pressure. Apart from periodic patrols, most of these major assets must be kept on general patrol, engaged in training operations with regional partners, or held outside of Chinese missile range. Moreover, if a major conflict were to occur, it is unlikely that the U.S. would deploy forces within China’s First Island Chain, given China’s overwhelming advantage in missiles and its growing advantage in small surface combatants and land-based aviation.

The Coast Guard provides an invaluable buffer in this situation. Its Legend-class National Security Cutter is capable of countering all but the largest Chinese cutters, the 12,000-ton two-ship Zhaotou-class — about one-third larger in displacement than U.S. Navy cruisers. Forward-deploying Coast Guard cutters to the Indo-Pacific provides the U.S. with greater flexibility when countering Chinese gray zone aggression. The U.S. has recognized the Coast Guard’s utility in the region and plans to base three new Sentinel-class Fast Response Cutters at Guam. While the Sentinel-class cutters will have an impact, adding a Legend-class to this deployment would be far more effective.

The Coast Guard plays a similar role in the Persian Gulf. The U.S. Navy only fields a small number of fast patrol craft — ironically, the remaining 10 Cyclone-class patrol ships are transferred between the Navy and Coast Guard depending upon requirements. Iran, by contrast, relies on its fast attack craft to threaten U.S. access to the Persian Gulf and, in a conflict, would use its short-range anti-ship missiles to target a U.S. Carrier Strike Group or Surface Action Group. Carriers, destroyers and cruisers patrolling the Persian Gulf must monitor and prepare for a range of actions, from ballistic missile launches to strikes in the Levant or, in a major conflict, a coordinated maritime and air campaign against Iranian missiles, air defenses and nuclear sites. The Coast Guard deploys six Island-class patrol boats to Bahrain, operating in conjunction with the Navy’s remaining Cyclone-class patrol boats, to screen U.S. forces in the Persian Gulf. In April, the Island-class cutters helped to prevent harassment by Iranian attack craft which twice approached U.S. ships.

The Coast Guard’s responsibilities clearly involve every major American interest. And it has been asked to take on even broader missions, including screening duties in the Indo-Pacific and Persian Gulf, counterterrorism operations, port security and, increasingly, Arctic patrols in response to Russian pressure.

President Biden, however, has essentially flatlined the Coast Guard’s budget.

The current budget proposal allocated $13.1 billion to the service, just a 0.3 percent increase over the previous year. The service itself has indicated the need for a steady funding increase; its commandant, Adm. Karl Schultz, called in January for a 3 to 5 percent increase over five years and a billion-dollar “booster shot.” But the new budget cuts procurement and construction from $2.26 billion to $1.64 billion. The Coast Guard’s operations budget has increased, but at the cost of cutting invaluable money from procurement.

Despite his policy of appeasement, British Prime Minister Neville Chamberlain was in the years just preceding WWII a strong advocate of the fighter planes that were decisive in Britain’s successful campaign to control its skies in 1940. Still, the “Battle of Britain” was narrowly won.

The pace of warfare today, the years needed to build new ships much less repair those damaged in battle, and the immense distance of mainland Asia from the U.S. put deterrence — along with the ability to win a conflict — at risk, absent properly designed and sufficiently numerous ships.