Blasphemy Laws and Censorship by States and Non-State Actors: Examining Global Threats to Freedom of Expression 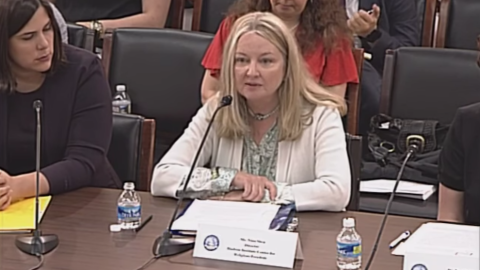 For more than 20 years, the Organization of Islamic Cooperation (OIC) has pressed Western governments to restrict speech about Islam. Its charter commits it “to combat defamation of Islam,” and its current action plan calls for “deterrent punishments” by all states to counter “Islamophobia,” which it does not define.

In 2009, the “International Islamic Fiqh [Jurisprudence] Academy,” an official OIC organ, issued fatwas calling for free speech bans, including “international legislation” aimed at protecting “the interests and values of [Islamic] society,” and for judicial punishment for public expression of apostasy from Islam.

The OIC does not define what speech should be outlawed, but its leading member states’ practices are illustrative. Millions of Baha’is and Ahmadis are condemned as de facto “insulters” of Islam, frequently persecuted by OIC governments, and attacked by vigilantes. Those seeking to leave Islam face similar fates. Religious minorities, including Christians, are disproportionately accused of blasphemy.

Muslim reformers are widely and specifically targeted for supposedly anti-Islamic speech. In Afghanistan, Ali Mohaqeq Nasab, editor of “Haqooq-i-Zen” (“Women’s Rights”) magazine, was imprisoned by the Karzai government for publishing “un-Islamic” articles criticizing stoning as a punishment for adultery. In Iran, Ayatollah Boroujerdi is serving a lengthy prison term for arguing that “political leadership by clergy” was contrary to Islam. Saudi Arabia has sentenced Raif Badawi to 10 years’ imprisonment and 1,000 lashes, for "insulting Islam through electronic channels,” “propagating liberal thought,” and other charges, after he wrote criticisms touching on religious figures in his country.

Egypt has been shown to ban books and imprison Muslims, and even Christian Copts, who express views contrary to the state-funded Sunni center, Al-Azhar. There, blasphemy convictions are on the rise. Earlier this year, Muslim journalist Fatima Naaot was sentenced to three years in prison for “contempt of Islam” for criticizing ritual animal slaughter practices in a Face Book post and four Christian teenage boys were convicted of blasphemy for mocking ISIS in a 30-second video. Last month, the Al-Azhar’s Grand Imam Ahmed el-Tayyib proclaimed on television that conversion from Islam is “treason” and should be punished with death.

Others are punished for deviating from locally dominant Islamic sects not only in repressive societies, but also in Indonesia, Malaysia, Algeria and other ostensibly moderate countries. Some 19 states criminalized apostasy, and in 12 of those, apostasy can carry the death penalty. Apostasy and blasphemy can overlap in some places: Ayatollah Boroujerdi and Raif Badawi were essentially accused of both.

I co-authored the book, Silenced: How Apostasy & Blasphemy Codes Are Choking Freedom Worldwide, whose Foreword was written by Abdurrahman Wahid, who served as president of Indonesia, the world’s largest Muslim country, and head of Nahdlatul Ulama, the world’s largest Muslim organization. Our research shows that such repression affects not only scholars but also journalists, artists, filmmakers, human rights activists, women’s rights advocates, teachers, dissidents, politicians, religious minorities and the whole range of those who are perceived as challenging the prevailing order.

Blasphemy restrictions do not bring social peace and harmony. In speaking about the Malaysian government’s proposal to criminalize the Christian use of the word “Allah,” on the basis that it gives offence to Muslims, Malaysia’s former finance minister Tengku Razaleigh observed:

The elastic goo of “sensitivities” is the favoured resort of the gutter politician. With it he raises a mob, fans its resentment and helps it discover a growing list of other sensitivities. This is a road to ruin. A nation is made up of citizens bound by a shared conception of justice and not of mobs extracting satisfaction for politicised emotional states.…”

Societies stagnant as their authorities limit access to a shrinking universe of “acceptable” ideas and information. The 2003 UN Arab Human Development Report, commenting on the fact that more foreign books had been translated by Spain in one recent year than in the entire Arabic speaking world in the last thousand, pointed to blasphemy restrictions: "__In Arab countries where the political exploitation of religion has intensified, tough punishment for original thinking, especially when it opposes the prevailing powers, intimidates and crushes scholars.__"

Such restrictions enable extremist to dominate the discourse by crushing debate. Take Pakistan’s anti-blasphemy laws, which have grown only more virulent with age, and whose application underscores how broadly subversive their effect is.

A Christian mother of five, Asia Bibi was arrested in 2009 after fellow field hands complained that, during a dispute, she had insulted the prophet of Islam. No evidence was produced, because to repeat blasphemy is blasphemous. Similarly, anyone who defends an accused blasphemer risks being labeled a blasphemer; two officials who made appeals on Bibi’s behalf—Salman Taseer, governor of Punjab, and Shahbaz Bhatti, federal minister for minorities affairs—were assassinated in 2011.

The murderer of Taseer, a member of his own security detail, though found guilty by the justice system, is treated as a hero in some quarters and was showered with rose petals by members of the lawyers’ association as he entered the courtroom for his trial. Three hundred pro-bono lawyers signed his defense papers. After rendering a guilty verdict, the judge immediately went into hiding. Following the convicted murderer’s execution this year, 25,000 fanatics rallied to demand the immediate execution of Asia Bibi.

Bibi has one last legal recourse, an appeal to the federal Supreme Court, but now no public official dares speak up for her—or for any other blasphemy defendant. I recently met with one of her daughters and was informed that Bibi’s entire family is now in hiding.

Accusations of blasphemy are brought disproportionately against Pakistan’s small Christian minority and convictions with death sentences continue in recent months. Intent is not an element of the crime, and recent years have seen cases brought against illiterate, mentally disabled, and teenage Christians, as well as pastors. Each case seems to heighten the sensitivities of the extremists and further fracture society. The flimsiest rumor of a Koran burning can spark hysteria ending in riots against entire Christian communities. Lahore’s St. Joseph Colony was torched in such a pogrom a few years ago.

But blasphemy complaints against Muslims are also on the rise. Muslims now make up the largest defendant class. Particularly hard hit are the Ahmadis, who pride themselves on reconciling Islamic beliefs with modern principles of pluralism, secularism, and peace. In 1974, the constitution was amended to declare the group heretical, and two of the five penal code sections devoted to blasphemy are specific to them. In a not atypical case, an Ahmadi doctor was charged with blasphemy after two Pakistanis posing as patients accused him of “posing as a Muslim” because, at their request, he read from a Koran.

Increasingly, liberal thinkers among Pakistan’s majority Hanafi Muslims are accused of blasphemy. The law’s vagueness—it bans irreverent words about Islam “either spoken or written, or by visible representation, or by any imputation, innuendo, or insinuation, directly or indirectly”—means it can be used against almost anyone, for almost anything. Extremists aggressively manipulate perceptions. Emboldened and even legitimized by the law, some are dispensing with the legal process altogether, acting, often with impunity, as judge and executioner.

The most famous victim of this parody of justice is Malala Yousafzai, a Nobel Peace laureate. The accusations have come not only from the Taliban, who shot but failed to kill her. She remains in exile, in the West.

Scholar Akbar Ahmed says that “perhaps dozens” of Pakistani reformist educators have faced blasphemy complaints lodged by their students. Professor Mohammed Younas Shaikh, who started “The Enlightenment” group in Islamabad as a forum for Muslims to discuss their faith in the contemporary context, was accused of blasphemy by a student and sentenced to death, though he managed later to emigrate.

Professor Shakeel Auj, dean of the Islamic Affairs Department at Karachi University and an acclaimed Koranic scholar, was shot to death. While well within the Sunni mainstream, Auj espoused a nuanced and sophisticated understanding of Islamic jurisprudence conducive to expanded rights for women. This brought death threats, including from some of his faculty colleagues. His pleas for protection were ignored, and the four professors arrested for threatening him were out on bail when he was killed.

In 2000, no less an authority than the Lahore High Court chief justice, Mian Nazir Akhtar, gave a public statement to the effect that “no one had authority to pardon blasphemy and that anyone accused of blasphemy should be killed on the spot, as a religious obligation.” British writer and human rights activist Benedict Rogers commented on the thuggery accompanying the law: “Regularly, mobs of Muslims, often led by Mullahs, crowd into the courtroom, shouting threats at the judge if he does not rule in their favour. Defense lawyers receive death threats for taking on blasphemy cases. Mobs gather outside the courtroom, and physically threaten the lawyers as they leave.”

As part of its changing cultural climate, Pakistan has become an “increasingly harsh environment for journalists, particularly those considered liberal,” the BBC reports. The Committee to Protect Journalists cites scores of reporters killed. Media personalities either shot and wounded or threatened with death for blasphemy in one recent year, alone, included: Shoaib Adil, a publisher in Lahore whose current affairs magazine is considered a rare liberal voice in the Urdu media; Pakistan’s most famous television journalist, Hamid Mir; the country’s most popular television host, Shaista Wahdi; and television anchor and journalist Raza Rumi. The BBC noted that Adil, whose transgression was to publish an Ahmadi judge’s book, is not a Taliban target but “the victim of an everyday witch hunt by Pakistan’s powerful religious groups—the kind of witch hunt that’s so common and yet so scary that it never makes headlines.”

After Governor Taseer was murdered for criticizing blasphemy laws, his daughter Sara observed: "This is a message to every liberal to shut up or be shot." When laws and politics are intertwined with religion, blasphemy and religious insult laws put their discussion and debate out of bounds, and beyond reform.

OIC pressure on European countries to ban “negative stereotyping of Islam” increased after the 2004 murder of Theo Van Gogh for his film “Submission” and the Danish Muhammad cartoon imbroglio of 2005. Many countries (such as France, Germany, Austria, the Netherlands, Finland, Italy and Sweden), hoping to ensure social peace, now prosecute people for “vilifying” Islam or insulting Muslims’ religious feelings.
As a foreign policy priority, for the sake of human rights, development, peaceful coexistence, and diversity, the United States should make an unapologetic defense of free speech in every appropriate forum.

As the late President Wahid wrote in his foreword to Silenced:

[Blasphemy laws] narrow the bounds of acceptable discourse. . . not only about religion, but also about vast spheres of life, literature, science, and culture in general. . . . Rather than legally stifle criticism and debate—which will only encourage Muslim fundamentalists in their efforts to impose a spiritually void, harsh, and monolithic understanding of Islam upon all the world—Western authorities should instead firmly defend freedom of expression.