China’s Phony War against Taiwan and Its Real Intention 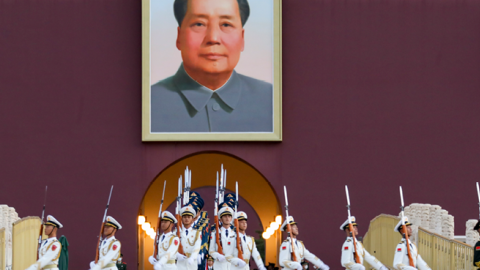 Caption
People's Liberation Army Honor Guard attend a flag-raising ceremony at the Tiananmen Square to mark the seventy-second anniversary of the founding of the People's Republic of China on October 1, 2021, in Beijing, China. (VCG via Getty Images)

Since the founding of the People’s Republic of China, the Chinese Communist Party has been waging something of a holy war against the people and government of Taiwan. But the CCP’s holy war is also a phony war, because it’s waged against an imaginary opponent with illusionary justifications, much like Don Quixote and his assault on windmills.

This phony war has several phony premises. Contrary to the Party’s claims, Taiwan has never been a part of the People’s Republic of China. Since 1949, not an inch of today’s Taiwanese territory has ever been under the administrative or sovereign control of the CCP regime.

The CCP claims there’s a so-called Taiwanese independence movement that it alleges is manufactured by a tiny clique of “splittist traitors” intent on separating from the mainland. But this is a red herring.

No mainstream politicians in Taiwan today are calling for Taiwan’s independence. All of today’s major leaders, from both leading political parties in Taiwan, the DPP and the KMT, have always strived to preserve the status quo. The status quo is Taiwan’s de facto independence. That status quo goes back to 1949.

If Taiwan has had de facto independence since 1949, then there is no need for Taiwan to declare independence today. It is already an independent country.

Key to the CCP’s false premise in Beijing’s phony war is the PRC government’s claim of Taiwan’s historical connection to ancient Chinese imperial dynasties, which it uses to justify the CCP’s sanctimonious mission to “liberate” a defiant Taiwan by way of a “reunification.”

Taiwan, like the majority of the countries in the world, has been ruled by many powers throughout history. A few Chinese dynasties have sporadically ruled the island of Taiwan. And it’s also been periodically occupied, annexed, and governed by other nations, including Spain, Holland, and Japan. The same pattern is true of China. China has been invaded and occupied by foreign powers too, including the Mongols, Manchus, and other nomadic powers.

But for most of history, Taiwanese people have been self-ruled. They did not belong to anyone. Given these facts, any claim of territorial sovereignty today should primarily be based on international law and the will of the people, not on past occupations or shared ethno-linguistic heritages.

The two governments that most often adhere to a dangerous historical revisionism are both pariahs: Russia and the People’s Republic of China. They both use false assertions about shared historical and ethno-linguistic legacies to justify their aggression. They ignore both international law and the will of sovereign people who will not accept hostile foreign occupation. One has already invaded and annexed much of Ukraine. The other has its sights on Taiwan.

International law is not on China’s side either. As recently as 2016, a historic ruling by the Permanent Court of Arbitration in the Hague, whose effects were felt far beyond the South China Sea, demonstrated unmistakably that Beijing’s expansive claims based on historic rights demarcating territorial or maritime sovereignty to areas it has never controlled are “without legal foundation.”

The PRC’s phony war on Taiwan is even phonier because of the CCP’s duplicity and opportunism. Beijing has professed to care about China’s territorial integrity, and has framed the “reunification” of Taiwan as a holy mission to restore lost territory to its rightful owner.

But the CCP regime has often been cavalier and opportunistic about China’s actual territory. A simple comparison of Chinese maps published in 1949, when the PRC was established, and today illustrates the point.

Since 1949, the communist government in Beijing has willingly ceded Chinese territories to friendly, mostly socialist and communist countries, such as the Soviet Union (Russia), Mongolia, and Burma. Combined, these territories are several dozen times larger than the tiny island of Taiwan.

If China’s territorial integrity were the CCP’s primary concern, it never would have taken these actions.

The CCP frames its resolve to take Taiwan as a matter of sticking to absolute principles. This is phony too, as the PRC diplomacy often has no principles.

The People’s Republic of China applies different principles to its phony war with Taiwan than it does in other settings. It opposes the “One China, One Taiwan” formula as a solution to a dispute between politically and ideologically distinct sovereign countries with common cultural and historical heritage in one instance.

But Beijing readily betrayed its North Korean ally of “Lips and Teeth” closeness in 1992 by carrying out a “One Pyongyang, One Seoul” policy that recognized South Korea diplomatically.

In the same vein, the CCP recognized West Germany diplomatically while continuing its official relationship with communist East Germany. The CCP is always opportunistic, not principled, in its own diplomatic dealings.

China’s war on Taiwan is phony. So then what is the reason for the PRC’s warmongering in the Taiwan Strait? The People’s Republic’s true target is the United States.

The Chinese Communist Party is a Marxist-Leninist ideological force. It has a millenarian zeal to win a self-described “epic struggle” against global capitalism.

All CCP leaders, from Mao to Xi, have unabashedly committed to such a vision and openly, voluminously detailed the CCP’s strategic intentions guided by such a conviction.

Former CCP General Secretary Jiang Zemin (江澤民) summed up this mission succinctly. “We Communists firmly believe that Marxism will win the final victory and the capitalist system will eventually be replaced by the socialist system. This is the inexorable law of historical development. Therefore, we are confident about the future of socialism.” (Jiang Zemin Selected Works, Vol. I. p. 350)

The United States is the global leader of capitalism. On that basis alone, it would be perceived as the CCP’s preponderant enemy. But still worse from Beijing’s perspective, the US treats Taiwan as an ally and partner. And it has dramatically extended its unofficial relationship with Taiwan since the self-ruled island became a vibrant democracy in recent decades.

The People’s Republic’s grand strategy of constant aggression in the Taiwan Strait serves to advance the CCP’s epic global struggle against the leader of the world’s capitalist democracies.

All the major crises in the Taiwan Strait have been provoked by the CCP to advance this grand strategy against the United States.

To defy the US Marines’ landing in Lebanon, and to rebuke the Soviet leader Nikita Khrushchev’s perceived “Marxist revisionism” and “counter-revolutionary capitulationism” to the imperialist United States and its actions in the Middle East, Mao Zedong (毛澤東) launched a furious shelling campaign of the Taiwan-occupied offshore islands of Quemoy and Matsu in August 1958. This brought the world close to a nuclear Armageddon along the Taiwan Strait.

Mao’s private doctor, Li Zhisui (李志綏), later observed, “It was Mao’s challenge to Khrushchev’s bid to reduce tensions between the Soviet Union and the United States… For Mao, the shelling of Quemoy and Matsu was pure show, a game to demonstrate to both Khrushchev and Eisenhower that he could not be controlled and to undermine Khrushchev in his new quest for peace. The game was a terrible gamble, threatening the world with atomic war and risking the lives of millions of ordinary Chinese.”

In 1995 and 1996, the CCP manufactured another Taiwan Strait crisis by firing missiles near Taiwan. This was meant to intimidate Taiwanese voters, but more importantly to intimidate Washington.

Then CCP General Secretary Jiang Zemin bragged, “On the Taiwan issue … our two military exercises in the Taiwan Strait shocked those inside and outside of the US government.”

This pattern of Machiavellian scheming continues today. The CCP believes that the crux of the United States’ purported anti-CCP conspiracy is an “engagement plus containment” strategy. The CCP also believes that Beijing’s counter move should be “to use confrontation to promote cooperation.”

This calculation drives the current Taiwan Strait crisis. It is designed to raise the tensions along the Taiwan Strait to the maximum in order to intimidate a perceived weak and indecisive American leadership into cooperation, but on the CCP’s terms.

It is meant to force America to abandon its resolve to support freedom-loving, sovereign and democratic Taiwan, and in so doing to sacrifice the United States’ global prestige and leadership.

This may be a phony war. But it has a real enemy.

Read in the Taipei Times.