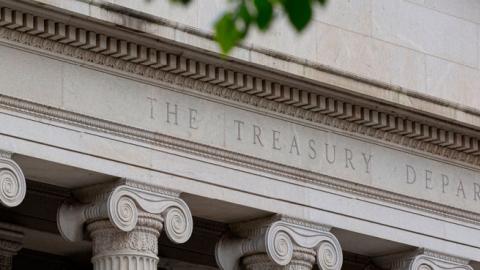 Caption
The US Treasury Department building is seen in Washington, DC, on July 22, 2019. (ALASTAIR PIKE/AFP/Getty Images)

Imagine being told that a prospective foreign business partner was denied a U.S. visa because of their involvement in a multibillion-dollar corruption scheme. Would you still want to work with them? Or that your foreign fiancé had been barred from visiting you in America because of their secret double life as a mass torturer. Wouldn’t you want to know?

Under current U.S. law, you might never find out because the State Department is required to keep the reasons for visa rejections confidential. This makes sense in the vast majority of cases, but it also means that officials cannot warn other Americans against dealing with individuals deemed too corrupt or dangerous to even set foot on U.S. soil. This sits at odds with the Trump administration’s focus on securing America’s borders, but suits the kleptocrats and other transnational criminals who value anonymity above all else.

The ability to travel quietly and move money secretly has fueled a decades-long boom in crime and corruption across the developing world. Tinpot dictators amassed vast fortunes by embezzling public finances and engaging in crony capitalism, welcomed into the global jet set even as they oppressed and impoverished entire populations. Meanwhile, adversarial authoritarian regimes such as Russia, China, and Iran all exploit illicit networks and criminal impunity to preserve their domestic power and project malign influence abroad.

As we learn more about this darker side of globalization, the facilitating role played by Western countries cannot be ignored. Instead of passing transparency laws to expose and deter economic criminals, many—including the United States—have become safe havens for stolen funds. Worse, some proudly offer opaque “golden visa” schemes to wealthy foreign investors that require no effective scrutiny of applicants or their financial backgrounds. The EB-5 visa, for example, was created to attract foreign investment to deprived communities across America. But instead of delivering the promised economic benefits, it has become “plagued by fraud and abuse” in the words of one senator.

The influx of corrupt foreign actors and their stolen wealth can have a corrosive effect on the integrity of Western professionals who are—wittingly or unwittingly—being paid to launder dirty money and whitewash dubious reputations. The sheer volume of illicit finance can even distort local economies, as the flooding of Chavista money into Miami’s inflated real estate market shows. Whether it derives from criminal activity or authoritarian scheming, corrupt foreign money always arrives with heavy baggage. That is why countries that fail to stop it soon start to look corrupt themselves.

Lawmakers in democracies have generally been slow to react to this threat, but a push for stronger anti-money laundering laws and golden visa crackdowns is now underway across the United States and Europe. One of the most important innovations in the fight against kleptocracy was the Global Magnitsky Act, which enables the U.S. Treasury to place sanctions and travel bans on foreign individuals involved in corruption or human rights abuses. Thanks to the campaigning efforts of financier Bill Browder, whose lawyer was brutally murdered by Russian authorities after uncovering a massive tax fraud, Canada and several European countries have adopted similar legislation, with the EU likely to follow suit.

The U.S. Helsinki Commission now appears to be advancing the Global Magnitsky agenda with the bipartisan Kleptocrat Exposure Act. This legislation would directly threaten the kleptocrats’ treasured anonymity by authorizing the Secretary of State to reveal the identities of individuals whose U.S. visa applications were rejected because of corruption or human rights abuses. This would target bad actors who may not have been sanctioned but are still of significant concern. State Department visa statistics suggest that, last year alone, this could potentially apply in thousands of cases.

Beyond deterring dangerous kleptocrats from trying to enter or do business in the United States, the benefit of revealing major visa bans would be the creation of a useful anti-money laundering resource for the private sector. Financial institutions are legally required to flag suspicious transactions to the U.S. Treasury, risking hefty fines and reputational damage if they fail to comply. Banks are therefore increasingly wary of doing business with customers from dubious backgrounds, and routinely consult government lists of the kind that the Kleptocrat Exposure Act would mandate.

Before issuing more heavy-handed sanctions to be policed by overburdened U.S. government agencies, Congress should try injecting a little transparency into the movement of dangerous people and dirty money across U.S. borders. Doing so will empower law enforcement and the private sector to shut down the bank accounts and business deals of kleptocrats and human rights abusers—keeping them out of America, denying them an undeserved share in our prosperity, and standing in solidarity with their victims in the world’s most repressive countries.