How to Counter China’s Military Ambition 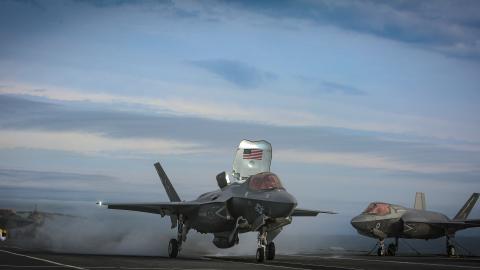 Under Xi Jinping, the most powerful Chinese leader since Mao Zedong, Chinese aggression toward other nations is coinciding with Beijing's increased repression domestically. Making matters more challenging, China is backing Russian imperialism against Ukraine with the goal of weakening and breaking up NATO.

It might seem simpler to focus on squeezing Russia and trying to warm relations with China , as President Joe Biden’s recent meeting in Bali seems to presage, but simple doesn’t mean smart or effective. China has the will and, increasingly, the capability to catastrophically undermine the US. Beijing is also collaborating with Russia, which is still a top-tier strategic foe of America. We must deal with reality as it is.

The problems are so great, and the economic elite’s fierce unwillingness to break its addiction to cheap Chinese labor might make preventing the CCP from surpassing the US seem impossible. But it is eminently doable. It begins with building and deploying, with a strong sense of national urgency, the military capabilities to credibly deter Chinese and Russian aggression. We need our allies to join this effort. Importantly, both China and Russia leverage Iran and North Korea. In turn, sanctions relief for either of those nations only harms us.

During the Taiwan Strait crisis of 1995-1996, the CCP demanded Washington refrain from traversing the Strait. We rightfully ignored them. China could gnash its teeth and wail, but it didn’t have the satellites to see US naval carriers, let alone the missiles able to hit them. We should have gotten busy then investing in the kind of weapons, across all military domains, to maintain the supremacy we inherited from the Cold War. But a bipartisan belief that trade among nations would put major power war in the dustbin of history took hold, and the US foolishly divested of key advanced technology programs, welcomed CCP scientists into our labs and universities, and permitted our military industrial capability to shrink away.

Beijing did not believe that history had evolved to a point where national powers simply accepted the principles of fairness between nations that the US and our economically powerful democratic allies ascribe to. The CCP was "hiding its hand and biding its time." Now the Chinese boast eye-popping weapons designed to take out US satellites, warplanes, ships, critical US ground assets, cyber and electronic warfare capabilities, and alarming biological and chemical weapons programs. Most concerning of all, Xi has commenced a "strategic breakout" of the CCP’s nuclear weapons program. Unlike during the Cold War when Washington sought to deter one major nuclear power, we are facing a future of two nuclear adversaries intent on leveraging their nuclear weapons. They want to deter us from intervening on behalf of our allies so they can carry out their revanchist aims.

So while we must reshore critical medical materials like antibiotics, find other sources of rare Earth metals, delete nefarious tech tools like TikTok, and dry up the massive CCP espionage operation, none of these actions will have a lasting effect if we can't defend our economic and security interests and make good on our treaty commitments to allies with military force.

Cries for appeasement and withdrawal won’t cut it. The only way the US has a chance to prevail is if we can convince Xi that we are able and willing to prevent CCP domination, through force if necessary. At the same time, we must demonstrate to other countries that they can bet on the US and that a world where we are stronger than China remains in their interest.

And that’s the bottom line: we must be able to churn out sufficient weapons and deploy them throughout bases in the Western Pacific to convince China that we are not resigned to decline. Practically, to deter what would be a horrific war, we should assume a war footing by setting out to build a military-industrial capability to produce the weapons we and our allies need. We must deploy those weapons with urgency in order to convince the Chinese that they will not prevail in taking Taiwan or pushing the US out of the Pacific.

This responsibility also entails leading allies and partners to back Ukraine to victory and expel Russia from Ukrainian territory. Doing so will shape Xi’s calculations and demonstrate that nuclear saber-rattling is not the trump card for 21st-century imperialism. To defend US preeminence, the sovereignty of nations, and free and open trade, Washington should begin implementing strategies and investing in capabilities to convey to adversaries that the US, uniting with willing anti-imperialist nations, is not so susceptible to nuclear coercion. Making the proper investments to thwart military campaigns that seek to deteriorate the US-led democratic international order and break the nuclear peace increases the odds of deterrence holding.

A strong America that refuses to bend the knee to CCP demands will keep Americans physically safe, secure, and their quality of life and livelihoods unharmed. Investing in a modern superior military is not the only thing we must do to prevail over the rise of Xi’s Chinese Communist Party, but it is the first and most urgent thing if anything else stands a chance of succeeding long term.