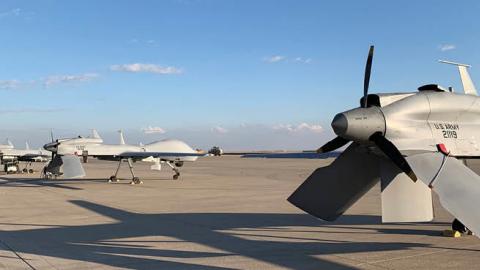 Caption
US Army drones at the Al Asad Airbase in the western Iraqi province of Anbar, January 2020. (Ayman Henna/AFP via Getty Images)

Since the Cold War ended, the US Department of Defense (DoD) has developed doctrine and capabilities predominantly for the most stressing campaigns it could face against opponents such as the People’s Republic of China (PRC), Russia, and North Korea. These worst-case scenarios are intended to ensure US forces can address “lesser-included” cases as well. This approach, however, favors concepts and systems designed for large-scale, high-intensity military conflict, and intelligent US adversaries are unlikely to present US forces with confrontations where DoD could leverage its strengths in missions such as power projection or precision strike.

America’s rivals have evolved approaches during the past decade to circumvent US military strengths, such as PRC and Russian gray-zone or hybrid operations, that obtain objectives at lower cost and escalation—albeit over longer timeframes—than traditional military combat. DoD should therefore revise its planning to raise the priority of new scenarios that stress the US military in different ways than theater-wide high-intensity combat such as through protraction, varying levels of escalation and scale, and the use of proxy and paramilitary forces.

The People’s Liberation Army (PLA) concept of System Destruction Warfare and the Russian military’s New Generation Warfare are representative of the new approaches being employed against the United States and its allies. Although they are very different in their theory of victory and methodology, both concepts share a focus on information and decision-making as the main battlegrounds for future conflict. They direct attacks on an opponent’s battle network electronically and physically to degrade its ability to obtain accurate information while introducing false information that erodes the opponent’s ability to orient. Simultaneously, military and paramilitary forces would present dilemmas to the opponent by isolating or attacking targets in a manner that neutralized their combat potential and controlled the escalation of a conflict.

The Rise of Decision-Centric Warfare

Decision-centric concepts like Systems Destruction Warfare and New Generation Warfare will likely be a significant, if not predominant, form of future conflict. During the late Cold War, the US military’s revolutionary approach to precision-strike warfare leveraged the then-new technologies of communication datalinks, stealth, and guided weapons. Similarly, decision-centric warfare may be the most effective way to militarily exploit artificial intelligence (AI) and autonomous systems, which are arguably today’s most prominent technologies.

An example of decision-centric warfare is Defense Advanced Research Projects Agency’s (DARPA) Mosaic Warfare concept. Mosaic Warfare’s central idea is that disaggregated manned and autonomous units guided by human command with AI-enabled machine control could use their adaptability and apparent complexity to delay or prevent adversaries from achieving objectives while disrupting enemy centers of gravity to preclude further aggression. This approach is consistent with maneuver warfare, and differs from the attrition-based strategies employed by Allied forces during the Second World War and by the US military during post-Cold War conflicts in Kosovo, Iraq, and Libya. Although Mosaic Warfare employs attrition as part of creating dilemmas for enemies, its primary mechanisms to realize success are denying, delaying, or disrupting adversary operations rather than eroding an opponent’s military power to the point where it can no longer fight effectively. Mosaic Warfare is therefore well suited as a concept for status quo military powers, such as the United States, seeking to deter aggression.

Mosaic Warfare proposes a force design and command and control (C2) process that would enable US forces to execute more numerous and diverse courses of action (COA) compared to today’s US military. The mosaic force’s disaggregated structure and use of human command with machine control would complicate the opponent’s decision-making, narrowing its options and imposing a potentially insoluble set of dilemmas. By growing the options for US commanders and reducing them for the enemy, Mosaic Warfare would seek to gain an “optionality advantage” that enables the US force to make faster and more effective decisions.

An optionality strategy stands in contrast to a forecast-centric planning approach, in which the COA most likely to result in success is chosen and implemented promptly to improve efficiency by allocating systems and force elements associated with unselected COAs to other missions. The early commitment of resources in the forecast-centric model necessarily constrains the option space available to commanders in the future.

Compared with today’s US military, the mosaic force design and C2 process could provide a greater advantage in an optionality competition by mitigating the natural trend, due to losses or improved enemy situational awareness, toward fewer options as a confrontation or competition progresses. For example, mosaic forces could more easily conceal platforms or formations with counter-ISR capabilities and reveal them later to enable new options; draw upon a larger number of smaller and less-costly reinforcements; or rely on decision support tools to allow continued employment of units that are cut off physically or electronically from senior commanders.

A mosaic force would also be better able than today’s US military to conduct operations that narrow the opponent’s options. By mounting many simultaneous actions and accelerating its decisions, a distributed force using human command and machine control could impose sufficient dilemmas on the adversary to preclude an operationally relevant number of COAs. Furthermore, a mosaic force could complement its greater scale and pace of decision-making with deception techniques such as distribution, feints and probes, and counter-ISR systems that can convince an opponent that certain options are not viable or unlikely to succeed.

Although DoD C3 constructs such as Combined and Joint All-Domain Command and Control (CJADC2) are beginning to incorporate decision support tools that integrate effects chains for a mission, their current and near-term instantiations are designed to support efficient delivery of fires rather than sustained optionality. Moreover, CJADC2-related C2 and communications (C3) initiatives such as the Advanced Battle Management System (ABMS) require the architecture and component systems to be defined in advance. As a result, CJADC2 will be inherently constrained in the level of optionality it is able to provide.

Within the C3 portfolio, DoD already makes sizable investments in communications resilience. The majority of new effort and resources should therefore be applied to C2 capabilities. Although the US military invests in what it calls C2 systems, these programs are predominantly operations centers and stacks of software that act as a substrate for passing data, information, commands, or authorities across a force. Although necessary to manage the force, current DoD C2 systems—which view C2 as connectivity¬—are not decision support systems, which view C2 as a process.

C3 capabilities for decision-centric warfare will need to do more than enable connectivity. For example, C2 tools will need to generate COAs that create and sustain optionality to improve adaptability and impose complexity on an adversary. To help junior leaders execute mission command, C2 tools would also need to understand which units are in communication, their role in potential COAs, and configure networks to ensure the needed units are aligned with the appropriate commanders. To assess these requirements and others for decision-centric C3, this study uses multiple perspectives, described below.

Stack view: Like the Internet, decision-centric C3 architectures will need physical mediums for the movement of data; network structures to manage the movement of data between commanders, sensors, and effectors; information architectures to organize data into meaningful forms; and applications to assess information such as decision support tools. Current technologies could meet these needs but would not enable dynamic composition and recomposition of forces and networks in an adversarial environment while pursuing an optionality advantage.

Network view: Enabling optionality and implementing decision-centric warfare will require the ability to align C2 structures with available communications, rather than attempting to build a network that will survive in the face of concerted adversary jamming and physical attack. These needs lead to a hybrid architecture that combines a network approach with a hierarchical approach, which could be characterized as “heterarchical.” This topology would align command with the node having the highest degree among those occupied by a qualified human operator.

Problem-solving view: A problem-solving process using analogous reasoning could more quickly assess potential options than addressing each new situation from scratch, and the resulting increase in decision space could enable commanders to defer COAs that would constrain their options until the last possible moment. Moreover, if an AI-enabled algorithm is used to build COAs without the benefit of supervision, an adversary could influence the algorithm’s learning through feints and probes that make the system believe COAs were successful that actually would have failed if not for the adversary’s actions.

Time view: The concept of optionality applies over multiple timescales, from strategy through industrial capability development and tactical operation of the force. The capabilities of C3 architectures should help expand the decision space made possible by efforts across each timescale, rather than only during missions.

Organization view: DoD’s C3 architectures do not exist in a vacuum. They must be employed by personnel in organizations through processes in strategic, industrial, operational, and tactical timescales. Optionality is key to gaining an advantage in decision-centric warfare, but simply fielding a more disaggregated force and the tools to use it will only marginally increase the US military’s complexity and adaptability if the force is used in a narrow set of ways that provide the highest probability of success for each individual operation. Decision-making organizations and processes are needed that expand the option space available to commanders for as long as possible.

Today’s Combatant Commander (CCDR) staffs lack the organization and processes to compose forces in a wide variety of configurations for imminent missions. To enable composition of forces in mission time, DoD could use an approach similar to that employed to compile computer programs into executable code. Software instructions are written in a higher-level computer language but need to be converted into binary form before the software can be executed by the computer’s processor. This approach would start with a COA from a decision support system and then combine appropriate units to support the operation. Although force composition is primarily hardware-focused, it also entails the software composition of the force package in the information and network layers of the technology stack.

The US military will need to adopt new force designs and C2 processes to enable decision-centric warfare, but these efforts will come to naught if they are not combined with tools and organizations to fully exploit the optionality possible in a more disaggregated force operated using human command and machine control.

Current DoD efforts through CJADC2 and associated operational concepts to evolve US forces toward more distributed organizations and more disaggregated capabilities are an essential step to enable a more decision-centric approach to military operations. The Advanced Battle Management System (ABMS) and several DARPA programs are developing C2 tools and processes that would increase the optionality available to commanders using these more distributed forces. DoD’s force design changes or C3 initiatives will need to go further for the US military to sustain an optionality advantage against peer adversaries that have already made the leap to decision-centric warfare and have a home field advantage from which to employ it.

Perhaps more importantly, new organizations and processes will be needed that allow CCDRs to compose and integrate disaggregated forces in theater and change the way DoD defines requirements and develops new capabilities. Without dramatic reforms to DoD’s requirements and force development processes, the US military risks falling behind adversaries in the competition for decision-making advantage, thereby threatening its ability to protect US interests and allies against great power aggression.