No Deal with Iran Is Better than a Bad Deal 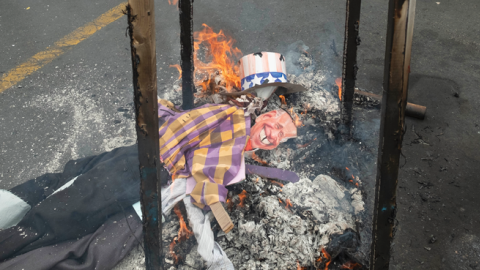 A new nuclear deal with Iran appears close to being reached in Vienna. For the past 18 months, talks have achieved barely anything. Iranian negotiators were leading on their American counterparts by pretending that an agreement was just around the corner—but it never really was.

Iranian negotiators were using US President Joe Biden’s desperation for a deal to squeeze out every last possible concession, and it looks as if they have accomplished their goal.

Iran stands to benefit handsomely from this revived agreement. At the beginning of his administration, Biden claimed that any new agreement would lead to a “longer and stronger” nuclear deal. For the most part US officials have given up on this aspiration. Sadly, it is likely that a new deal will be even weaker than the original 2015 agreement.

Considering the state of geopolitics, signing a new agreement with Iran right now would be a terrible idea. It would also mark a new low in the Biden administration’s inept statecraft. There are two reasons.

First, any deal agreed with Iran is turning a blind eye to Tehran’s nefarious activities and rewarding its malign behavior around the region. Since Biden entered the Oval Office in January 2021, Iran’s behavior has become increasingly cavalier. There have been more than a dozen maritime incidents in the Gulf attributable to Iran, and Iranian proxies fired rockets and launched drone attacks across the region. The targets of these attacks included Irbil airport, a base used by US forces at al-Tanf in Syria, and numerous civilian and military locations in Saudi Arabia and the UAE. As recently as last week Iran-backed militias attacked US forces again in Syria.

The US response to these provocations has been weak. Not until the attacks in Syria last week did the Biden administration finally respond with military force, because the White House is so desperate to chalk up a perceived foreign policy victory it is willing to turn a blind eye to obtain an agreement with Iran.

Second, there is the Ukraine angle to consider. The issues of Ukraine, Russia and Iran are connected. Russian-Iranian military cooperation is no secret. Iran will provide armed drones to Russia for use in Ukraine after Moscow’s stockpiles were depleted by a surprisingly effective Ukrainian air defense.
If Iran received sanctions relief as part of any new deal and was allowed to become a player in the global economy, Tehran could help Russia evade Western sanctions. Indirectly, it is quite possible that a new deal with Iran could, indirectly and in part, finance Russia’s war in Ukraine.

However, there is one silver lining when it comes to the Biden administration's Iran policy. Israel and the Gulf states share similar threats from Iranian aggression and expansionism. Any new agreement with Iran will probably push Israeli and Arab cooperation to an even higher level. After all, although it was Donald Trump’s leadership in the region that really got the Abraham Accords started, the seed of Israeli-Arab normalization was planted by Barack Obama and his willingness to cut the original Iran deal in 2015. With such great progress being made on Israeli-Arab relations since the Abraham Accords in 2020, it is only logical to assume even deeper level cooperation will result from a new Iran deal.

From a US domestic political point of view, the timing of this deal with Iran is curious. Hotly contested midterm elections will take place in November, and the Democrats will probably lose control of the House of Representatives. There’s even a chance that the Republicans can regain control of the Senate.

In Congress, both Democrats and Republicans have been critical of the White House’s approach to the negotiations in Vienna. After seeing what happened in Afghanistan last year, the American public is not sure if it can trust the Biden administration on the big foreign policy issues. So it’s not clear why the Biden administration would be willing to sign such a controversial deal with Iran in the run up to the midterm elections.

During the 2020 presidential campaign Biden had one major foreign policy pledge: to rejoin the Iran deal that Trump had left. He seems determined to do this at any cost.

Now is the time for Arab and Israeli leaders and policymakers to put pressure on the US government to step back from the talks before it is too late. The message to Biden should be crystal clear: No deal with Iran is far better than a bad deal.