Not the Best Middle East Defense 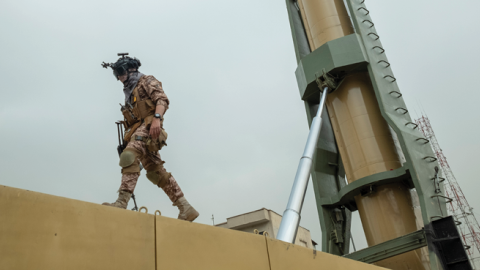 In advance of President Biden’s visit to the Middle East, his administration and its Israeli counterparts talked up the creation of a variously named “Middle East Air Defense Alliance.” The concept is a response to the threat that Iranian ballistic and cruise missiles and drones pose to countries across the region, including Israel, Saudi Arabia, the United Arab Emirates, Iraq and others.

The initiative gained widespread attention in late June in a Wall Street Journal article quoting unnamed American and regional officials. Then, Israeli Defense Minister Benny Gantz, U.S. National Security Council spokesman John Kirby and others explicitly discussed the idea. Some Gulf states have denied or downplayed the story, because they do not want to antagonize Iran or because they remain overtly hostile to Israel, even if some maintain close ties behind closed doors.

On its face, the idea makes sense. The Iranian missile and drone threat is real and growing. The Abraham Accords opened the door to broader, deeper and more open cooperation between Israel and its Arab neighbors. The recent inclusion of Israel in U.S. Central Command (CENTCOM) facilitates greater coordination and information sharing among American and regional armed forces. The United States can and should help its Middle Eastern allies and partners defend themselves more effectively.

Regrettably, the Biden administration introduced this initiative in a context that threatens to leave the proposed alliance as little more than a symbolic gesture at best. At worst it could further undermine Middle Eastern security.

First, the initiative appears entirely defensive. Without parallel discussions on deterring Iranian missile and drone attacks, Tehran has little reason to reduce its investment in missile and drone forces or to stop using them to menace its neighbors. On the contrary, the focus on defense could spur Iran to increase its development and deployment of these weapons to overwhelm its neighbors’ augmented defenses.

Second, and more importantly, the push for a regional air defense cooperative comes as the United States zealously pursues a return to the Iran nuclear deal, the Joint Comprehensive Plan of Action, or JCPOA. Contrary to its advocates’ inflated and insistent claims, the agreement’s limited and temporary restrictions will leave Iran at the nuclear weapons threshold no later than the end of this decade. Long before then, in October 2023, the terms of the JCPOA lift the United Nations’ missile embargo on Iran. More immediately, a return to the Iran nuclear deal will provide the regime access to hundreds of billions of dollars, some of which undoubtedly will go toward more capable missiles and drones. This isn’t theoretical speculation: In the years after the deal’s conclusion in 2015, Iran’s “defense” budget jumped by over 30 percent.

In other words, the Biden administration is advancing a policy that enables and funds the Iranian missile threat while offering to help U.S. partners and allies defend themselves against that same threat. The United States looks like a drug dealer offering to open a rehab center.

There is a better way. The president could have used his trip to announce that the JCPOA’s time has passed and that he is committed to developing another plan with Iran’s neighbors to genuinely ensure that the Islamic Republic never develops or acquires nuclear weapons. An improved policy would not only defend against Iranian missiles and drones but also deter Iran from even contemplating their use. Such a policy would exact a price from Tehran for its attacks on American troops, contractors and allies and for its seizure of American and other foreign hostages. The United States would again enforce its own sanctions to prevent Chinese and others’ oil purchases from financing Iranian missiles, terrorism and aggression.

The president still has an opportunity to lead America away from a policy of weakness and appeasement to a policy of strength and deterrence. Even after his trip, if President Biden were to change course, he would find a coalition of capable, committed Middle Eastern allies who are eager to work with the United States to guarantee a more secure and stable region that serves American interests. Such a policy would bolster America’s partnerships in the Middle East, would be far more likely to succeed, and would create greater regional security at a time of growing threats elsewhere around the globe.