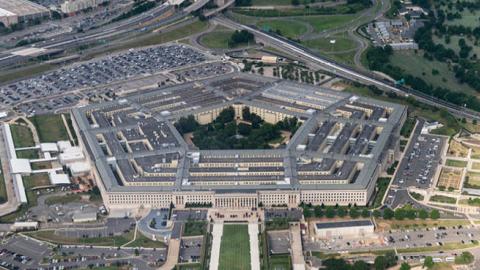 Caption
Aerial view of the Pentagon on Tuesday, June 30, 2020

There is an activist effort among nuclear idealists to mobilize public opinion and urge elected officials to pledge to support a policy of "no first use" (NFU). Put simply, an American president who would adopt a policy of NFU would be declaring that the United States will never be the first country to use a nuclear weapon in a war.

No doubt these activists were thrilled to see Democratic presidential nominee Joe Biden offer an enthusiastic recent embrace of NFU. But his position is not new; at a campaign event last year, Biden confirmed that he has supported NFU for more than 20 years.

Reasonable observers may therefore ask: Why hasn't his desire been realized?

The reality is that every single American president, Democrat and Republican alike, has rejected an NFU declaration because to do so would invite unacceptable risk that could yield catastrophic war—and for no tangible benefit at all.

This is true for four reasons.

First, adopting an NFU policy invites a strategic non-nuclear attack against the American people, our allies and our interests. An NFU declaration broadcasts to America's enemies that they can proceed with a chemical weapons attack on U.S. forces and their families, can proceed with a biological attack on an American city and can proceed with an overwhelming conventional attack against critical U.S. assets, all without fear of nuclear retaliation. Any would-be enemy could carry out an infinite number of attacks short of a nuclear attack, while the NFU-endorsing U.S. president assures their safety from our nuclear weapon arsenal.

An NFU policy is especially unwise now, while the United States contends with not one, but two major power threats. Both Russia and China are expanding their military capabilities and have acted in ways that demonstrate their willingness to attack sovereign nations and redraw borders.

Of the two, China poses the single greatest threat to America's national security and way of life. General Secretary Xi Jinping and his Chinese Communist Party (CCP) are now in the midst of a rapid modernization of their military. China has the most diverse missile force on the planet, and has launched more ballistic missiles for testing and training than the rest of the world combined. Nor has Beijing neglected its nuclear capabilities—although their efforts are furtive, we know the CCP is investing in a large force, with delivery systems capable of launching nuclear weapons. Director of the Defense Intelligence Agency Lt. General Robert P. Ashley, Jr. said in 2019 that the intelligence community believes China is likely to at least double the size of its nuclear stockpile in the course of implementing the most rapid expansion and diversification of its nuclear arsenal in China's history." "The number commonly cited for China's stockpile is around 300. But it is plausible that there are actually many more than 300, as one highly credible former government official confided to me.

What's more, China likely has an advanced chemical warfare program. Like its nuclear program, China does not reveal to the United States what, exactly, it does have. But the more we learn about the CCP's gross abuse of religious minorities, including of the Uyghurs imprisoned in Xinjiang concentration camps, the more our hackles should be raised. Western democracies view any use of chemical weapons as unconscionable, but the evidence shows our enemies do not share this view.

Although the scope of Russia's economy and the ambitiousness of its national objectives pale in comparison to China's, Russia still seeks to undermine the United States and our allies wherever it can. Like China, it is investing heavily in its nuclear forces and has repeatedly violated U.S. arms control agreements. To take one particularly abhorrent and brazen example, on August 6, 2018, the Russian government used chemical weapons on British soil in an attempt to assassinate a former Russian spy, eliciting sanctions by the United States.

Third, our adversaries would hardly restrict themselves if America were to adopt a true NFU policy. In fact, we have reason to believe that many are willing to use nuclear weapons first in a conflict.

Start with Russia. Russian officials have implied their comfort with the use of nuclear weapons in a conventional conflict, have at times threatened nuclear use against purely defensive systems and, in at least one instance, an official stated that the conditions for a Russian nuclear use could as small as a regional, or even a local, conflict. In June 2015, the Obama administration's deputy secretary of defense, Robert Work, and then-Vice Chairman of the Joint Chiefs of Staff Admiral James Winnefeld informed Congress that Russian military doctrine includes what some have called an 'escalate to de-escalate' strategy—a strategy that purportedly seeks to de-escalate a conventional conflict through coercive threats, including limited nuclear use." Then-Trump administration Secretary of Defense James Mattis "testified to the same concern in 2018.

As for China, the Chinese have purported to embrace NFU. Way back on October 16, 1964, China declared that it will never, at any time or under any circumstances, be the first to use nuclear weapons. For decades, that was blindly accepted by those who wished to believe it—including NFU proponents in the U.S. But current Commander of U.S. Strategic Command Admiral Richard, when speaking about the Chinese NFU policy, "told senators in February 2020, "I could drive a truck through that no first use policy." He went on to explain that the Chinese nuclear program lacks transparency and fosters distrust. Worse, the CCP's dubious claims to disputed Chinese territory raises concerns about how, and where, Beijing may employ nuclear weapons. Moreover, the CCP is engaged in a robust disinformation campaign across all areas of its government and society: America should not presume anything but deceit from our number one geopolitical threat.

Finally, adopting an NFU policy would cause allied nations, who have rightly forsworn nuclear weapons and who rely on the American nuclear umbrella, to doubt our assurances. And if allies and partners can no longer rely on our nuclear umbrella, they will develop their own. The result of the nuclear idealists' efforts, zealous as their mission is to take the world down to zero nuclear weapons, could ironically result in precipitous nuclear proliferation.

President Obama, recipient of the Nobel Peace Prize for, in part, his denuclearization aspirations, eschewed an NFU declaration. Though he was ideologically motivated to pursue the idealist nuclear disarmament agenda, reality and the weight of responsibility to protect the American people won the day. It is inexplicable that his vice president, who has decades of experience grappling with the global threats and has had a front-row seat to these executive decisions, would still hold to the notion that NFU is good policy.

We must see the world as it is. We might wish that other nations will follow our lead and do as we do, but other nations do not hold to our same moral judgments. We should not assume that our adversaries will make the same strategic and operational decisions that we make. The historical evidence shows that they are not inspired by our efforts to de-emphasize nuclear weapons, either by unilaterally moving toward lower numbers or by placing restrictions on testing.