Royal Navy in the Pacific: An Ally Against China, Where We Need It 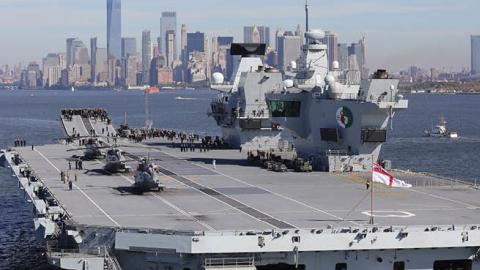 Because of its renewed emphasis on allies, the Biden administration should be grateful for the United Kingdom’s plan to deploy a Carrier Strike Group (CSG) to the Indo-Pacific later this year. Sending a British carrier group to Asia demonstrates London’s understanding of Chinese President Xi Jinping’s global challenge to democracies. Building on such cooperation is a major administration policy objective. The UK’s carrier presence will be complemented by submarine and surface ship deployments from France and Germany respectively.

The Royal Navy CSG operated during the U.S.-U.K. “Joint Warrior” exercise in October. This planned deployment indicates that the U.K.’s CSG has reached its “Initial Operating Capability” phase; in plain English, each of the carrier group’s escorts can conduct their required missions. While lacking the punch of a large-deck aircraft carrier, the Royal Navy now has far more combat power than it possessed since it operated two Audacious-class fleet carriers in the 1960s.

HMS Queen Elizabeth, the CSG’s capital ship, displaces 65,000 tons, comparable to the Russian Admiral Kuznetzov and Chinese Liaoning and Shandong. It will be the first carrier group to deploy the F-35; the U.S. Marine Corps has experimented with deploying F-35Bs on its America-class big-deck amphibious ships as makeshift carriers, but the U.S. Navy has yet to deploy F-35Cs on its supercarriers.

Despite appearances, the U.K. group will have a modest impact on the Indo-Pacific balance. The Queen Elizabeth-class lacks a catapult mechanism, instead using a “ski jump” to launch its F-35Bs. This decreases the air wing’s range by limiting the payload an aircraft can carry. Because the F-35B has the shortest range of any F-35 variant, investment in range extension would be useful. But unlike the U.S. Navy, which is acquiring the MQ-25 Stingray as a carrier-based tanker, the Royal Navy has no such refueling platform.

Moreover, the HMS Queen Elizabeth fields a limited air wing. The CSG’s Carrier Air Wing (CVW), its primary offensive tool, is limited to 24 to 35 F-35Bs, along with 14 helicopters tasked with Anti-Submarine Warfare (ASW) and Airborne Early Warning (AEW). By comparison, even the understrength short-range air wings deployed aboard U.S. carriers include three to five squadrons (36 to 60 airframes) of F/A-18 multirole fighters, a fixed-wing electronic warfare squadron, and a fixed-wing AEW squadron, along with an ASW-focused helicopter squadron. The F-35B is a fifth-generation stealth fighter that provides the U.K. with sophisticated capabilities, but its range limitations and limited numbers decrease its combat efficacy.

Still, the U.K.’s deployment is an important diplomatic-political signal.

First, it demonstrates the potential for European engagement in the Indo-Pacific. Like its Soviet predecessor, China poses a direct threat to the Western order and must be countered accordingly — but the U.S. is not powerful enough to do so without allies. Moreover, China has increased in stature partly because of its ability to prevent allied cooperation by increasing its area-denial ability at sea. It also has targeted specific European countries, hoping to preclude anti-China policy by promising major infrastructure investments and by using its huge consumer market to attract European companies. Europe has become more skeptical of Chinese “friendship” — but, absent U.S.-guaranteed freedom of navigation and lacking the military capabilities to enforce it themselves, Europe will be at China’s mercy. Thus, the U.K. deployment is the first evidence of a major European power willing to defend its Asian interests.

The Biden administration has indicated that alliance-building and multilateralism will define its foreign policy. Considering the threat China poses, international coordination must go beyond environmental cooperation, diplomatic niceties at major summits or even substantive economic measures.

The U.S. must contain Chinese expansion, giving Europe a predominately economic role but leveraging Europe’s limited yet sophisticated military capabilities. The U.K. deployment should be a springboard for this strategy.

Second, the U.K. deployment indicates that Britain, despite domestic turmoil, remains a critical ally. During the 1950s, the Royal Navy deployed carriers to the Mediterranean; the British Army and Royal Air Force maintained a significant presence in the Near East, and the Royal Navy maintained bases in Asia. But by the late-1960s, with its confidence shattered after the Suez crisis and its currency devalued, the U.K. progressively withdrew all but token forces from its bases east of the Suez Canal. And, by 1982, British forces were hollowed out — with its Falklands War victory that year largely attributed to luck and U.S. intelligence on Argentina’s Exocet missiles.

A resurgence did occur during the latter half of Prime Minister Thatcher’s second term, but the British military was largely constructed to fill capability gaps in U.S. forces, rather than deploy independently. The only robust post-1982 British military deployment was its 2000 intervention in Sierra Leone, which stressed British capabilities. Force hollowness increased throughout the 2000s, even as the British forces deployed to Iraq and Afghanistan.

The U.K. carrier group deployment, therefore, constitutes a clear policy shift. If Britain has the spine to build a fleet large enough to sustain regular deployments, it can become a pillar of democratic defense architecture in the Near East and Asia, second only to certain regional allies.

The U.S. Navy is attaching a guided missile destroyer, The Sullivans, to the U.K. group, and U.S. pilots will comprise between a third and a half of the Brits’ strike-capable air wing. Why add the U.S. ship instead of another British vessel? Because doing so will relieve some pressure on the British fleet, which operates one-third the number of the surface combatants it had during the Falklands War — just 19 ships, including 13 Type 23s that are nearing the end of their service lives. If the U.K. seeks to become a relevant player in the Indo-Pacific balance, then it must remedy this clear force hollowness.

Closer relations with allies and multilateralism are not ends in themselves but, rather, means to greater security and to achieve shared diplomatic, technological and financial goals. The planned cooperation between the U.S. and Royal navies in the Western Pacific is necessary and instructive for the future of all states in the shadow of an increasingly militant China.