Sanctions on the Taliban Will Hurt Afghan Citizens. Here’s How To Fix That. 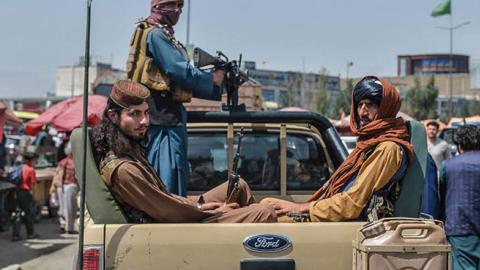 Caption
Taliban fighters on a pick-up truck move around a market area, flocked with local Afghan people at the Kote Sangi area of Kabul on August 17, 2021, after Taliban seized control of the capital following the collapse of the Afghan government (Photo by HOSHA

The United States and its allies first put sanctions in place against the Taliban decades ago, restricting financial transactions with the group, blocking its assets and limiting international travel for senior members. But now that the Taliban controls nearly all of Afghanistan, the effects will reach far beyond its leaders. While the sanctions are in many ways justified, the international community will have to engage in a delicate balancing act to avoid a humanitarian disaster after the planned U.S. departure date of Aug. 31: It will have to weigh punishing the regime against the desperate needs of the Afghan people.

When the United Nations and the United States imposed sanctions — some predate 9/11, although they stiffened considerably afterward — the point was to penalize and limit the capacity for violence of an insurgent group with ties to international terrorism, even though it did control large swaths of Afghanistan. But starting Wednesday, the sanctions will fall on an entity that rules a nation of 38 million people (a few holdout pockets aside). The challenge will be to limit the impact of sanctions on ordinary Afghans without giving a free hand to either the Taliban or terrorist groups that are operating in territory the Taliban controls.

Because of the regime’s character and history, only a handful of countries seem likely to recognize a Taliban-led government, and there is little appetite for a full lifting of sanctions just because the militants have seized power. The Taliban’s leaders claim they have changed, but — notwithstanding their acquiescence so far in the evacuation of Americans and their allies from Afghanistan — foreign governments are skeptical, to say the least.

At best, it will take years to see if the Taliban’s desire for international legitimacy and assistance for its citizenry leads it to make and comply with promises to expel or decapitate foreign terrorist groups, as some observers hope it will. The Taliban’s core beliefs make it unlikely that its government will meet international standards for human rights, religious freedom or women’s rights. All of that argues for some degree of international ostracism to continue.

But sanctions on the Taliban now threaten to compound the already dire challenges of Afghan citizens. Afghanistan is one of the world’s poorest countries, and half of its population, including 10 million children, needed some humanitarian assistance as of early 2021, according to one analysis. Tens of thousands of Afghans have lost their homes and become internally displaced. Schools, hospitals and clinics have been destroyed in war. The country will soon run out of fuel and will need to import food. The Afghan economy is on the brink of collapse; 80 percent of the nation’s budget was sustained by international grants and aid — now at risk because of the sanctions.

Since the Taliban’s takeover, sanctions have led to the freezing of Afghan government accounts with the U.S. Treasury, the suspension of access to money from the International Monetary Fund and the withdrawal of World Bank financing for existing development projects. Nongovernmental organizations are also in a bind, because sanctions criminalize almost every interaction with the Taliban; it is unclear to many NGOs what help they can provide to their Afghan counterparts without running afoul of the law.

With the serious potential for a nationwide humanitarian crisis, it would make sense to rethink the blunt instrument of sanctions. The United States has shown some flexibility in the past in handling the Taliban: While it sought to cut the group off from international finance, for example, it never declared the Taliban to be a “foreign terrorist organization” under U.S. laws, which would have prohibited any transactions between it and U.S. citizens. That’s because successive administrations wanted to keep the option of negotiating with the group. (On the other hand, the Haqqani network, a Taliban offshoot — whose chief, Sirajuddin Haqqani, is also deputy leader of the Taliban — is a U.S.-designated terrorist entity.)

It should be possible to develop a new sanctions regime that clearly and specifically targets individuals — and groups that support, protect or finance terrorists — while accepting that providing aid to Afghan citizens will require some interaction with the Taliban. The United States and the United Nations should communicate to aid groups what kind of interactions are permitted, and any actions that directly help the population ought to be allowed. Hawkish policymakers might view such a move as giving too much legitimacy to a radical government. Yet the depth of the need of the Afghan people must be acknowledged.

A policy of imposing targeted sanctions — in tandem with permitting some aid to flow — might influence the political dynamics among various Taliban factions, favoring those that would oppose al-Qaeda and other terrorist groups in the interest of staving off a collapse of the nation’s economy and the immiseration of its people. Negotiators might propose, for example, that Haqqani — who U.S. officials say is implicated in a 2011 terrorist attack on the American Embassy in Kabul, among other atrocities — be denied a senior government position in exchange for more liberal aid policies. If there is no possibility of aid in the first place, though, there would be no reason for the Taliban even to consider such a move.

The United States could continue sanctions targeting individuals, such as Haqqani, even if they become part of the government. Restrictions on their travel and finances could be made more stringent, with consequences for anyone doing business with them. Many Taliban leaders have property and business interests in Pakistan and such countries as Saudi Arabia, the United Arab Emirates and Qatar; those governments could be held to higher standards of compliance with even tougher sanctions.

No one should be under any illusion about the Taliban’s reliability as a negotiating partner. The Taliban negotiates within the framework of its strict interpretation of Islam, and its promises and statements are often narrowly constructed. For instance, in the 1990s, its representatives told American diplomats in Pakistan that the group “did not support terrorism in any form” — to quote a diplomatic cable revealed by WikiLeaks — but also disputed who counted as a “terrorist.” The Taliban hosted Osama bin Laden, citing traditional Pashtun laws of hospitality, and after 9/11 insisted that the United States had not offered evidence of his involvement in the attacks. There are echoes of such doublespeak today, as the group pledges that terrorists will not be allowed to use Afghanistan as a safe harbor, even as a spokesman maintains that there is “no proof” of bin Laden’s involvement in 9/11.

But engaging in a limited way with the Taliban may be the price of helping Afghan citizens. It is worth thinking about the weaknesses of past sanctions against the Taliban, too. The counterterrorism sanctions following 9/11 were meant to force Afghanistan’s neighbors to hand over al-Qaeda remnants and prevent Taliban fighters from regrouping after being defeated by the U.S.-backed Northern Alliance. Yet these sanctions failed to prevent the Taliban from waging a 20-year insurgency and emerging as Afghanistan’s rulers again. The group was able to generate enough money from narcotics trafficking to blunt the effect of being cut off from legitimate sources of financing. It’s likely that this revenue source will continue to insulate the Taliban leadership from the financial effects of sanctions now that the group holds power — although such income would only minimally help the Afghan people.

Often, malign powerful actors such as the Taliban transfer the cost of international sanctions onto innocent people without incurring any loss themselves. The stakes of letting that happen now are far higher than they were before the takeover.

The Taliban is unlikely to veer too far from its obscurantist ideology, and expecting its transformation is unrealistic — whether carrots or sticks are deployed. But the entirely reasonable desire to sanction the group must be balanced against the scope of the humanitarian challenges now facing the Afghan people. Sanctions have their place, but in some cases, they should be modified to save lives.