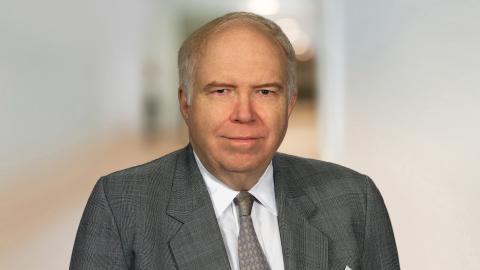 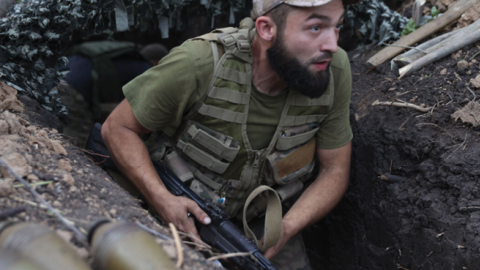 Caption
A Ukrainian soldier walks along a trench at a position along the front line in the Donetsk region on August 15, 2022. (Anatolii Stepanov/AFP via Getty Images)

Ukraine’s status as a borderland between Europe and Russia has often confined it to the periphery of Western strategic thought. For many, Ukraine constitutes the southeastern edge of the European continent, but not its heartland. For Russian President Vladimir Putin, however, Ukraine sits at the center of his strategic vision for Eurasia. Far from a backwater, the country is the key to his imperial aims—a prize for which he has risked his army and bet his rule.

In Putin’s mind, if Russia were to control Ukraine, Moscow would dominate the Black Sea—and so would be in a stronger position in every connected region, from Eastern Europe to the South Caucasus and from the Balkans to the Caspian Basin. Russia would also complete its breakout into the Eastern Mediterranean, long a priority of Moscow, by securing the connection between its warm water ports in the Black Sea to its new bases on the Syrian coast.

Most obviously, a Russian breakthrough in Ukraine would put military pressure on NATO. Russia’s economically more powerful partner, China, would also draft on Russia’s military success to increase its influence across Eurasia, leading countries to hedge in ways that go well beyond the recent friction over Huawei. Such a Sino-Russian advance would directly threaten the prosperity of the United States. At well over $1.5 trillion in annual trade, the transatlantic economy is the largest in the world. Last year, 48 of the 50 US states exported more to Europe than to China, while European foreign direct investment in the US totaled nearly $3.2 trillion Those exports and investments sustain millions of US jobs— and depend on the American-led order reigning supreme in Europe.

The course of the Russia-Ukraine War will shape strategic calculations beyond these regions, too. Nothing that happens in Ukraine will lessen Beijing’s claim on Taiwan, for example, but the war’s outcome may shape how and when China moves against the island. Ukraine and Taiwan are very different countries: the former is the largest state in Europe and borders its adversary; the latter is geographically small and enjoys a maritime barrier of defense. But Beijing will be interested in how a Western-supported defender fares against a superior attacking force in large-scale conventional warfare.

Ukraine’s fate will also concentrate the minds of countries without nuclear weapons, who have seen Russia pulverize Ukraine after the latter surrendered its nuclear arsenal in 1994. If US support for Ukraine is lackluster as Kyiv tries to recover lost territory, non-nuclear states living under the American nuclear umbrella will be more likely to pursue their own weapons of mass destruction.

Six months into the war, no one knows how it will end. Russia has taken several heavy blows against its military and economy. Ukraine foiled major attacks on Kyiv, Kharkiv, and Sumy in battles that will go down in the annals of warfare, wounding or killing tens of thousands of Russian troops over time. And after a slow start, Western sanctions are crunching Russia’s gross domestic product by an estimated 10-15 percent by year’s end. Ukraine is also winning the information war, exploiting key wins like the sinking of the Moskva, the devastation of Saki Air Base in Crimea, and the recapture of Snake Island to lift morale and gain support.

Russia has not shot its bolt, however. Over time, its forces have made methodical progress in the Donbas, taking the strategic city of Mariupol and all of Luhansk Oblast. In Kherson, it maintains a small position west of the Dnipro River, from which it threatens Odesa. Through his energy blackmail, Putin is also pressuring European states to adopt a neutral stance on the war. As winter approaches, calls for accommodation from NATO allies will grow louder.

Meanwhile, Ukraine faces a near blockade of its ports by Russia’s Black Sea Fleet and the destruction of its civilian infrastructure. Because of mines, huge swaths of Ukrainian farmland are off-limits, damaging the agricultural sector. Russia has also killed thousands of civilians and has forced millions more to flee their homes and country—some will never return if the conflict drags on. By the end of this year, Ukraine’s gross domestic product will have shrunk by nearly half.

Under these circumstances, the argument that Ukraine is winning is delusional. It may not be defeated, but it cannot liberate itself, either. Instead, it is condemned to perpetual warfare—and anguish. This is because the West employs a symmetrical strategy of weapons assistance in the hopes of establishing an equilibrium between Russia and Ukraine that leads to negotiations. As Bryan Clark and Peter Rough write, “Instead of equipping Ukraine to fight Russia as NATO would—with long-range artillery, air power, and area air defense—the United States and NATO sent short-range missiles, artillery, and small drones, roughly the same weapons used by Russian troops.”

The Biden administration does not appreciate that this posture may expose Taiwan to more, not less, danger. Colin Kahl, the senior Department of Defense official charged with coordinating military aid to Ukraine, described in June what China could expect from the world in the event of an attack on Taiwan: “I think it’s imperative for the leadership in Beijing to understand that, where the world is now, the Ukraine scenario is a much more likely outcome than the Hong Kong scenario.” Instead of deterring China, such a comparison may embolden it.

Putin clearly isn’t interested in equilibrium. He is in it to win it. We can think of his strategy as guided by two ticking clocks: the first measures Russian military losses, and the second measures the West’s economic pain. Putin’s goal is to slow down the first clock and speed up the second. To that end, he has threatened nuclear war to deter Western military aid, switched to large-scale artillery offensives to preserve manpower, targeted civilians to kill Ukrainian morale, and shut down energy flows to weaken Europe’s resolve. Western sanctions may damage the Russian economy and cause unrest, but since the 2011 Moscow protests, Putin has built a security apparatus that can crack down on most dissent.

The West has proven less adept at clock management. Of course, the current military assistance hurts the Russian military, as will the West’s export controls of high-end technologies. But these strategies encourage a slow-moving, grinding conflict that Ukraine can only win years down the road, if ever. This approach’s great vulnerability is that it presupposes Western public opinion will strongly support Ukraine indefinitely. Yet as the leader of the coalition, President Joe Biden has not sufficiently nurtured or cultivated that support, such as by regularly explaining to the American people why Ukraine matters.

Unlike Putin, who makes unilateral decisions with an iron fist, the Biden administration has to maintain a large alliance and convince the legislature to appropriate funds, all during tough economic times. Putin is counting on his system to suppress dissent while betting that voters will eventually force Western leaders to buckle under economic pressure. Absent US-led Western support, Ukraine would be his for the taking. To avoid this outcome, the US should switch its gameplan from avoiding Ukraine’s defeat to helping it achieve victory.

Americans like winning, and success creates a slipstream. Even with the range limitations imposed by the US, Ukraine has shown what it can accomplish by using High Mobility Artillery Rocket Systems (HIMARS) to strike Russian depots.

If the US removes its caveats and empowers Ukraine to strike Russian supplies deep behind enemy lines, the balance of power might change. Ukraine could then exploit such strikes through counteroffensives made possible by a menu of weapons yet to be delivered.

For starters, Ukraine would benefit greatly from more of what is already working: HIMARS and M777 howitzers. To ease the burden, the US should urge its allies to continue transferring their Multiple Launch Rocket Systems (MLRS). For example, the British have sent the M270s, and the Norwegians will follow suit. For its part, Germany is sending the MARS-II. The broader the Western effort, the better it is for Ukraine.

Most of all, Ukraine needs an Intelligence, Surveillance, and Reconnaissance (ISR) capability, which medium-altitude long-endurance unmanned aerial vehicles like the MQ-1C Gray Eagle and MQ-9 Reaper can provide. These tools, which double as strike assets, would give Ukraine the flexibility to take the fight to the Russians. As Can Kasapoğlu argues, the key is to inflict pain on Putin so that he is forced to the negotiating table as a supplicant.

To succeed, however, the US should not only broaden the types of systems it supplies Ukraine, but also rethink how it trains Ukraine’s troops. Instead of waiting for Ukrainian setbacks to green-light new weapons packages, after which troops must be exfiltrated to undergo a crash-training program, the US and its partners should start training Ukrainian troops today on systems the West will likely transfer tomorrow. As Luke Coffey proposes, such a “train today for tomorrow” program would allow for a smoother introduction of new weapons onto the battlefield.

At the same time, the US should draw Russian assets away from the war. Ukraine may be at the heart of Putin’s vision, but Moscow has pulled forces and resources from other priority areas. Today, Russia is cannibalizing its force to sustain the fight in Ukraine, creating an imbalanced force posture that is ripe for exploitation. The president could send the secretary of state to Nur-Sultan for talks, deploy assets to Moldova, and discuss the importance of a major NATO base in Finland. He could also stoke the growing frustrations of Russia’s minorities, many of whom suffer per-capita casualty rates above those of ethnic Slavic soldiers. Each of these moves would unsettle Moscow.

In the economic domain, the major European economies have announced their intention to wean themselves off Russian energy over time. It is essential that they do not reverse these promises. When Putin observes his European counterparts, he has to see resolve. To ease the pain, however, the US should become an arsenal of energy.

Washington should also seize on the war to drive a wedge between Europe and China. It is unclear how well Putin can blunt Western sanctions by turning to Beijing. But the US should ensure that every cubic meter of gas or barrel of oil that Russia sells to China fuels European resentment of the Chinese Communist Party. More than any other event, including the COVID-19 pandemic, the war in Ukraine has alerted Europe to the dangers of China. It is in the US national interest to draw parallels between Ukraine and Taiwan—and reinforce to our allies the dangers of depending on either Russia or China.

The pandemic and the Russia-Ukraine War are the opening salvos in a long competition between the US-led order and a Sino-Russian bloc. Ukraine may be a historic borderland, but it has made the courageous choice to anchor in the West. How the US responds to this opening act of aggression against it will reverberate around the world and set the stage for years to come.