The Fourth Nuclear Window of Vulnerability 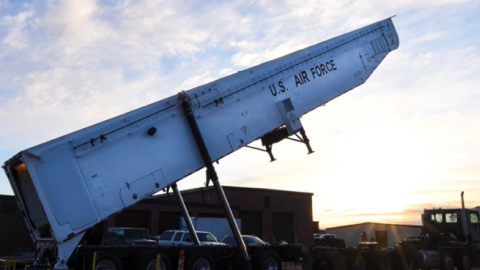 The Russian invasion of Ukraine has fully opened the fourth nuclear window of vulnerability facing the US in the nuclear age, threatening the security of the United States, and requiring a robust US response.

That was followed by the second new danger of a massive Soviet nuclear buildup during the 1970-79 era of détente and peaceful coexistence that threatened to so change the correlation of forces with the United States that Soviet aggression would go unchallenged.

Peace through strength ended this threat and collapsed the Soviet empire.

Ironically, the third window flowed from this success, as the breakup of the Soviet Union engendered fear of loose Russian nukes in the hands of terrorists, the parallel emergence of new nuclear armed rogue states such as North Korea, and the continued fear of a nuclear armed Iran.

These factors in part pushed the US into war against Iraq as the culmination of fears about a nuclear armed rogue state working with terror groups reached the top of the national security worries of the United States. Nuclear technology programs in Iraq and Libya were subsequently eliminated, although not in North Korea and Iran. That “window” remains open.

With the 2022 Russian invasion of Ukraine, and the breathtaking growth in Chinese nuclear forces, a new fourth window of vulnerability has opened.

This new Russian doctrine moves markedly away from deterrence solely through the threat of retaliation. It is a policy of nuclear coercion that heightens the value of nuclear weapons, increases the potential for nuclear first use, even as the US actively seeks to move away from reliance on nuclear deterrence.

Most Americans assume the US has a nuclear retaliatory capability primarily to ensure the US is not attacked with nuclear weapons. However, that assumption does not hold for Russia and China, where in the mind of the leaders in Moscow and Beijing, “deterrence” is their policy to prevent the United States from coming to the defense of our allies in NATO and the Western Pacific, in order to give Russia and China a free hand to engage in military aggression.

Russia has explicitly adopted a policy of nuclear coercion by repeatedly threatening to use nuclear force should the United States defend Ukraine by directly intervening with US military forces. Russian President Putin has also made similar threats about other NATO nations coming to the assistance of Ukraine.

Certainly, the US did not anticipate the aggressive Russian policy. After all, after the assumed end of the Cold War, the US concluded (1) the country had more warheads than needed, (2) the breakup of the Soviet Union further reduced deterrent requirements, and (3) the US counted on Russia to also reduce their strategic and non-strategic forces as Moscow had promised.

Due to both arms control requirements and due to the aging of platforms such as the Minuteman II ICBMs, the United States from 1987-2000, markedly reduced its strategic or long-range nuclear forces through INF, START I, and START II, from well over 12000 deployed warheads to 3500, a 75% reduction

While Russia did significantly reduce its strategic forces, Putin rejected the key START II ban on multiple warhead land-based ICBMs, although earlier the US anticipated the treaty would come into force and went ahead and eliminated its multiple warhead ICBM force accordingly.

While the United States took significant, unilateral and publicly known steps to meet its legal commitment under arms control treaties, the United States also unilaterally eliminated a vast inventory of what were considered battlefield nuclear weapons with no treaty requirement in place. Unfortunately, it was here where Moscow, (outside the INF treaty) serially reneged on its promised theater force reductions.

Even so, despite the lack of Russian reciprocity, the US continued to delay modernizing even the nuclear force the country could keep under arms control deals, as Washington assumed the Cold War was over and building a credible deterrent was of diminishing importance. Other priorities came higher.

Although the US concluded the 2002 Moscow treaty with Putin, the US unfortunately allowed the START II ban on multiple warhead ICBMs to fall by the wayside, wrongfully assuming that Russia would reject such a ban as Russia could not afford to build single-warhead missiles in sufficient numbers and thus would reject any deal that proposed to ban the deployment of (cheaper) multiple warhead missiles. Other US officials assumed Russia was so broke that Moscow did not have the funds for any major nuclear modernization build-up, so a MIRV ban was unnecessary.

Both US assumptions were huge errors.

Russia now has the jump on us not only with respect to long-range multiple warhead firepower, but especially on short-range nuclear weapons. At the same time Russia was aggressively modernizing, the US decades long failure to intelligently plan for nuclear modernization forced a compression of current US acquisition plans into a very short period, escalating our annual costs and increasing the dangers of any delays, while also providing very little budget room for the rapid acquisition of new, unanticipated technology like hypersonic speed systems.

At heart of the multiple wrongful assumptions Washington made was the idea that the unprecedented scope of the nuclear reductions since 1987 reflected a permanent change in the national security objectives of the Russian government. Especially given previous nuclear arms deals such as SALT I (1972) and SALT II (1979) codified very large increases in deployed strategic nuclear weapons, the US assumption remained that further reductions using the START process were certainly likely, even automatic, and US nuclear forces and strategy could be changed accordingly.

For example, between 1991-1997, the US eliminated an entire class of strategic bomber (B-1s) modern ICBMs (the Peacekeeper) three Minuteman ICBM wings (Whiteman AFB, Ellsworth AFB, and Grand Forks AFB) and one additional missile squadron (564 MS at Malmstrom AFB), plus an entire class of 76 medium nuclear bombers (the FB-111).

The United States further significantly lowered its nuclear force posture when President Bush and President Clinton decided to consequentially remove US bombers from day-to-day alert and aim our missiles through de-targeting at the broad ocean (a P5 adopted hedge against accidental or unauthorized launch).

Such restraint ran parallel to the US failure to replace our remaining aging legacy platforms. This despite the full public knowledge that America’s nuclear enterprise had begun to atrophy and planning for modernization needed to be initiated.

USAF Lt Gen Garret Harencak described this era as a “holiday from history” where the United States decided that it was the end of changing history, and the US did not need to pay close attention to our nuclear deterrent. One 2004 reform plan for the Pentagon envisioned placing nuclear weapons and the US nuclear arsenal under a new “other” force structure category along with “special forces.”

Despite the eighty percent reduction in conventional US forces devoted to NATO, the 75 reduction in US strategic nuclear forces, and the near elimination of US theater nuclear weapons, Russia still decided (in 1997-9) to initiate a huge nuclear force modernization plan, while China just a decade later decided to switch gears from a minimal deterrence to adopt a full-fledged nuclear Triad and move toward becoming a strategic nuclear peer of the United States.

The puzzle is that few have asked why did both nations move in such a dangerous direction? Following the end of the Soviet Union, the United States upheld what successive administrations assumed were the nation’s disarmament obligations, cutting the defense budget by a cumulative $1 trillion between 1989-2001, and cutting our nuclear forces by ninety percent.

Now Russia largely also reduced its treaty accountable warheads as required under the INF and START agreements, but then simultaneously built up its remaining nuclear forces by acquiring at least 20 new systems including bombers, cruise missiles, submarines and sea and land-based missiles, as well as a dozen new theater nuclear systems, 55% not limited by any nuclear arms deals.

China had no arms limits, and even US nuclear restraint did not apparently change the geopolitical calculus of China’s leaders as Peking engaged in what has now been described as a “breathtaking” nuclear build-up, although from the end of the Cold War, the US continuously described China’s growing power as largely a “peaceful rise” and repeatedly sought to “reset” relations with Russia.

This naivete was based on a universal assumption that China was sticking to its strategy of minimal deterrence, no first use, and with an inventory of only a few hundred warheads, assumed stored separately from their delivery vehicles.

It was also assumed Russia was no longer the formidable Cold War foe, and its military ambitions minimal. Successive administrations sought a possible “reset” with Russia, despite a hostile relationship over Serbia, for example, or the early Russian invasions of Georgia, Moldova, and Ukraine. By 2012, the American President could dismiss concerns over Russia with the quip that some folks “wanted their Cold War back.”

This occasional American tendency to look for benign explanations for what potential enemies are doing is not good strategy. Peaceful intentions on the part of the United States do not change the objectives of totalitarian leaders in Russia and China.

Especially when such governments believe America is in retreat and not paying attention to its security requirements, it can be an open invitation for what President Bush described as bad hombres aggressively pursuing their military objectives.

An examination of the cable traffic between Berlin and the State Department in the early 1930’s reveals a similar pattern. Some US diplomats argued Hitler’s role was to moderate between the Nazi fanatics and the “good Germans,” not dissimilar to the cable traffic at the same time between the US embassy in Tokyo and the US State Department that described Admiral Yamamoto (the architect of the attack on Pearl Harbor) as a “moderate” who would keep the worst impulses of Japanese Prime Minister Hideki Tojo under control.

Now that the US is beginning to recognize this newest window of vulnerability, how then should the United States respond to the Russian threats to use nuclear force over Ukraine and similar Chinese threats with respect to Taiwan?

The most critical requirement is the development and acquisition of a Navy based nuclear armed cruise missile. Contrary to claims of the global zero community, proponents of such technology are simply seeking a retaliatory capability and deterrent proportionate to Russian theater or regional capabilities. Threatening to retaliate from a small-scale attack but with central strategic systems armed with multiple hundred kiloton nuclear weapons risks an all-out Armageddon type exchange and thus is simply not a highly credible deterrent.

Opponents of such a Navy cruise missile technology assume that any use of nuclear weapons will not remain limited. But if that is the case any retaliatory strategy is simply a bluff, as the United States would be signaling however inadvertently that the US sees the country’s only choice as suicide or surrender.

The news is that despite the Cold War ending four decades ago, we are back to Cold War #2, requiring as retired Vice Chairman of the Joint Chiefs General John Hyten notes the US to re-establish deterrence. Hyten explained the idea was not to win an escalation gambit with Russia or China, but to deter completely the use of any nuclear force by America’s enemies.

The very essence of deterrence is having the very visible means to stop our enemies from achieving their objectives. The US President must have the tools to end a crisis before it escalates and gets to the nuclear level. As President Kennedy explained when asked why the Cuban missile crisis ended peacefully, “Minuteman was my ace in the hole” the new ICBM technology America deployed the very same October 1962 day the US discovered Soviet missiles in Cuba.