The Iran Deal Is a Dead-End Pact — Stop Negotiating, Joe 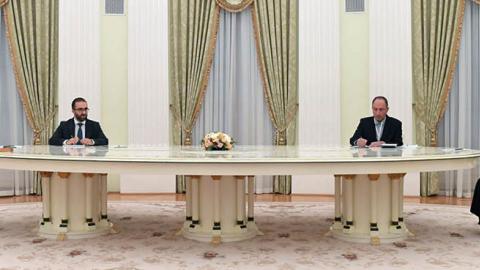 The fate of the Iran nuclear deal is in limbo after a pause in talks prompted by Russia’s 11th-hour demand for written guarantees it will be allowed to trade freely with Tehran — including military and technical cooperation — despite Ukraine-related sanctions. Russia seems to have scaled back its demand, however, and meetings might resume quickly.

For all the recent talk of “off-ramps” for Russian President Vladimir Putin in his war on Ukraine, the pause in nuclear negotiations has provided an unexpected chance for President Joe Biden to extricate himself from disaster, namely the deal being hammered out in Vienna.

Since 2015, proponents of the nuclear deal have touted its supposed virtues: “unprecedented inspections,” “a one-year break-out time” and the “blocking of all Iran’s paths to nuclear weapons.” But experience has taught us that these virtues always have been a mirage.

The deal decriminalized Iran’s nuclear-weapons program, allowing the regime to maintain and expand a nuclear infrastructure unnecessary for the peaceful production of nuclear energy, subject only to limited, temporary and reversible restrictions. At the same time, it lifted economic sanctions imposed for the illegal construction, concealment and use of that very same infrastructure, giving the regime and its terrorist proxies access to billions of dollars.

For the United States, the primary benefit was supposedly keeping Iran a year away from nuclear breakout — i.e., having the fissile material necessary for an atomic bomb. Yet these commitments were always more easily reversible than the Obama administration let on, as the response to the Trump administration’s withdrawal from the deal has demonstrated.

By rapidly installing a larger number of — and more advanced — centrifuges than permitted under the deal and enriching uranium to 60% purity in short order, the regime proved that the one-year breakout time was just arms-control vaporware. In this sense, withdrawing exposed the many mistakes inherent in the agreement itself. Though it certainly wasn’t his intent in leaving the deal, Donald Trump called Barack Obama’s bluff.

Supporting the deal today demands an even larger leap of faith. The contents of the Iranian nuclear archive Israel acquired in 2018 make it impossible to pretend that Iran’s nuclear program is peaceful: They revealed a nuclear-weapons program far more comprehensive and advanced than previously known. Tehran continues to stonewall the International Atomic Energy Agency investigation of the undeclared nuclear activities, sites and materials the archive exposed.

While arguments that the deal serves US interests increasingly strain credulity, it’s clear that a restored deal would benefit Iran even more than the original. The regime reportedly will still be allowed to store, rather than destroy, excess centrifuges — even those built in violation of the agreement. Through its work on advanced centrifuges, high enrichment and uranium metallurgy, Iran has gained valuable experience and knowledge needed for nuclear weapons.

The deal’s gradual expiration has already begun. In 2025, the “snapback” mechanism — designed to restore sanctions and nuclear restrictions on Iran in case of violations, and America’s primary means of disincentivizing those Iranian violations — will expire. All significant caps on uranium enrichment and stockpiling and on research, development and installation of advanced centrifuges will be gone in fewer than nine years.

The deal’s “sunsetting” would parallel the immediate lifting of sanctions, reportedly including those imposed for Iranian foreign terrorism and other non-nuclear atrocities. The administration now accepts that the breakout time will be much less than one year.

In short: Iran would get more for less.

Why has Biden’s team worked so hard to renew this dreadful deal? From its earliest days, the administration demonstrated it sought détente and was willing to turn a blind eye to Iran’s aggression and even its nuclear program as the price. Tehran rewarded this conciliatory approach with increasingly severe nuclear violations and a series of attacks on US forces, neighboring states and commercial vessels at sea.

On March 13, Iran launched a missile attack on Erbil, Iraq, near the US consulate. The regime proudly took responsibility for this outrage, while the State Department hurried to deny that America was the target. The Iranians should be terrified of attacking anything near a US facility. Instead, it’s the administration that’s quaking at the prospect of a confrontation.

In Vienna, Iran’s negotiators refuse even to speak directly to their American interlocutors. Instead of demonstrating the self-respect to walk away, Washington has relied on European and Russian intermediaries. The US negotiators undoubtedly justified appeasement by arguing it was necessary to sign a new deal. But given this dynamic — one side escalates, the other placates — the outcome of the talks was predetermined.

The Iranian regime must be furious with Vladimir Putin — whom it has supported throughout the Ukraine invasion — for throwing a wrench in the works with his last-minute sanctions play.

If negotiations fall apart and there’s no deal, what is Team Biden’s Plan B? With Iran reportedly just weeks away from breakout, will the White House put other options on the table or double down on capitulation? It would seem that Putin has now called Biden’s bluff.

This pause in negotiations gives the administration a chance opportunity to reassess its fidelity to this quixotic deal. The world is witnessing in real-time the dangers of confronting an aggressive, nuclear-armed, energy-exporting autocracy with a foreign policy of destabilization, a history of violating its international arms-control obligations and only limited accountability to its citizens. The lessons for handling Iran’s nuclear ambitions couldn’t be starker.

It’s time to take the Iranian nuclear threat seriously, to stand with America’s allies and stand up to Iranian aggression and terrorism and to end the regional nuclear arms race that the Iran deal sparked. It’s time to stop bluffing.