Cropsey and McGrath on the purpose of China's naval build up 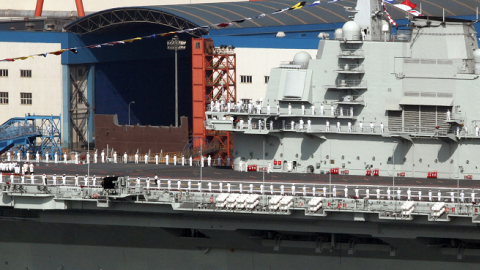 Last week, Secretary of Defense Chuck Hagel was the guest of honor for a tour of China’s aircraft carrier Liaoning, an event that once again raised U.S. media interest in China’s navy, its aspirations, and the role this carrier and others may someday play.

It is not clear how many or what kind of carriers China will eventually build—whether they will more closely resemble Liaoning or be somewhat more modest in design, akin to U.S. Wasp-class amphibious assault ships. The former point China toward grander power projection missions; the latter toward the more immediate goal of establishing hegemony over its neighbors, many of whom have territorial disputes with China in the South and East China Seas. But it does appear that the People’s Liberation Army Navy (PLAN) has the aircraft carrier “bug” and the implications for the United States are large, whichever course Beijing takes.

Several commentators were quick—and correct—to observe that the PLAN aims to deny the U.S. Navy and American seapower in general access to the Western Pacific. This sensible observation, however, overlooks the strategic objectives China seeks to accomplish by turning to carrier aviation.

For example, Bloomberg’s editors penned an editorial using China’s secondhand carrier to argue that the PLAN is decades behind the U.S. Navy and therefore not much of a threat. The editors’ failure to confront the larger strategic picture belittles the threat that China poses. It’s these kinds of arguments that insist that the rebalance to Asia is unwise, and that continued deep budget cuts to the U.S. naval and aerospace forces are warranted.

This might make a small amount of sense if China were turning to carrier aviation to prepare to fight the United States. But there is not a shred of evidence for this opinion. There is no credible discussion in Chinese naval journals of using the carriers to take on the United States, and there is more than a bit of “mirror imaging” in the analysis of those who suggest otherwise.

If not to take on the United States, why is the PLAN pursuing an expensive future of aircraft carrier power projection?

When it comes to navies and ships, size matters. Because of its ability to project daunting lethal power at great distances the aircraft carrier has been the dominant symbol of naval power for seven decades. The ability to operate one as a power projection platform represents the “table stakes” in any discussion of what constitutes a world-class navy.

As China surveys its geostrategic environment, a baseball diamond of nations is inscribed, with India at first base, Australia at second and Japan at third. Each of these nations operates some form of aviation assault platform capable of launching fixed wing aircraft, although the Japanese Izumo class would have to be reconfigured to do so. China wants to play ball against a benign infield.

The most consequential misconception about the PLAN carrier program is that it is designed as part of a strategy to deter the United States from using its naval power to mediate East Asian conflict, the “mirror imaging” mentioned above. This is not the case.

China is building the capability to project power from the sea in order to build its strength relative to its neighbors, primarily those with whom it has ongoing territorial seas claims (including Vietnam, the Philippines, and Japan). China does not need to build a navy as large or as powerful as the U.S. Navy in order to create fear and uncertainty among its neighbors. It only needs to build a navy with the credible means to project power over those neighbors’ shores.

Put another way, the strategic target of the PLAN in building a carrier force is not the U.S. Navy, but the network of alliances that longstanding U.S. economic and security interests in the region aim to preserve. Creating uncertainty and doubt in the minds of regional governments that the United States can continue to assure their security is at the heart of China’s desire to see the U.S. diminished in the region.

Some of the pieces of China’s strategy are clear: aggressively assert excessive territorial claims, build striking power to enable what one U.S. Navy intelligence expert called “short, sharp” wars to contest those claims, and create an anti-access capability that would slow down the U.S. response to such an action. Working these three lines of approach simultaneously, China hopes to prevail without conflict, by accomplishing what Dr. Andrew Krepinevich of the Center for Strategic and Budgetary Assessments has called the “Findlandization” of the Pacific.

Some have suggested that the Chinese carrier program is actually a boon for U.S. interests. They contend that the expense of building and equipping a fleet of aircraft carriers would help enfeeble PLA defense spending—a fate like that which the U.K. is now experiencing as it tries to build and equip a single aircraft carrier (of two planned).

While constructing a carrier and its associated air wing is expensive, the Chinese economy—and unquestionably the will of their ambitious leadership—can easily come up with the resources necessary to fit out a few aircraft carriers, especially as the peril to U.S. interests in the region is in geometric proportion to the investments in Chinese carrier aviation. The PLAN is on solid strategic ground in pursuing carrier-based power projection, and while their approach is not a direct threat to U.S. forces (or is not likely to be a threat in the foreseeable future), it serves as a long-term, slowly metastasizing threat to the most significant competitive advantage the U.S. enjoys in the region – its network of friendships and alliances.